Angels' Johnny Giavotella has improved since his days with Kansas City 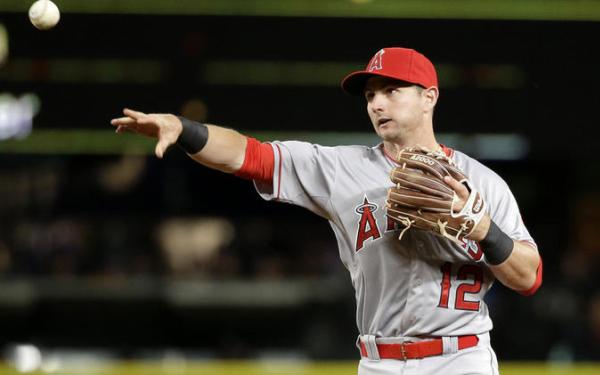 The Kansas City Royals are in town for the Angels' home opener Friday night, giving new Angels second baseman Johnny Giavotella a chance to stick it to his old team, the one that never gave him a chance, that never believed in him.

It's a great story line … if only it were true.

The fact is, Giavotella, a second-round pick of the Royals in 2008, started 46 games for Kansas City in both 2011 and 2012, and he didn't play well enough to unseat starting second baseman Chris Getz, a career .250 hitter with no power.

Giavotella, 27, spent most of 2013 and 2014 at triple-A Omaha, while Getz, Elliot Johnson and Emilio Bonifacio manned second base in 2013 and Omar Infante played there in 2014, helping Kansas City win the American League pennant and come within one victory of a World Series trophy.

"Any time you're called up to the big leagues, it's an opportunity to show them what you can do at this level," said Giavotella, who entered 2015 with a .238 average in 125 big league games. "If it's 10 at-bats or 100 at-bats, you have to utilize that to your advantage.

"Unfortunately, in Kansas City, I don't think I made a big enough impression for them to feel confident enough to put me in the lineup every day at second base, so they chose to go with other guys."

Giavotella has a true sense of himself and his abilities, and that should help him as he replaces Howie Kendrick, the career .293 hitter and solid defender who was traded to the Dodgers for pitcher Andrew Heaney in December.

The 5-foot-8, 185-pound Giavotella knows he won't hit for the kind of average or power that Kendrick provided for almost a decade in Anaheim. He knows it could take several years to become as proficient defensively as Kendrick.

But that won't prevent him from being the best Johnny Giavotella he can be, and that might be good enough for the Angels.

"I really don't think about trying to fill Howie's shoes," Giavotella said. "If I try to do more than I'm capable of doing, I'll just fall flat on my face and fail. If I go out there and have confidence in my abilities, stay relaxed and play hard, I know good things will happen. God gave me a certain set of talents. I'm going to play to the best of those talents and not try to be anybody else but myself."

Giavotella brings high energy and effort, an ability to get on base and drive in runs and to make the plays he should make in the field.

His diminutive size, skill set and attitude are somewhat reminiscent of David Eckstein, who was a relative unknown when the Angels claimed him off waivers from Boston in 2000. However, he went on to become the fireplug of a shortstop and leadoff man who helped the Angels win their only World Series title in 2002.

Giavotella won the second-base job in spring training not by dazzling the Angels with his bat and glove but by playing consistently on both sides of the ball while Josh Rutledge, the favorite to win the job entering camp, and Taylor Featherston, who won the utility infield job, struggled at the plate.

"There certainly was an energy that he brought in spring training," Manager Mike Scioscia said. "No doubt, at the time we were making the decision, he was swinging the bat better and making the routine plays in the field."

Giavotella is off to a solid start, going four for nine (.444) in the season-opening series at Seattle. Now he'll get a chance to play against many of the friends and teammates he came up with in the Royals system, players such as Mike Moustakas and Eric Hosmer.

"I have a pretty good rapport with those guys; it will be nice to see them," Giavotella said. "But I don't think they'll like me as much being on a different team."

Garrett Richards, who is recovering from left-knee surgery, threw 96 pitches in seven innings of a minor league intrasquad game in Arizona on Thursday, giving up two earned runs and four hits, striking out 12 and walking three. Barring setback, the hard-throwing right-hander will begin a minor league rehabilitation assignment next week with an eye toward returning to the Angels rotation by late April.