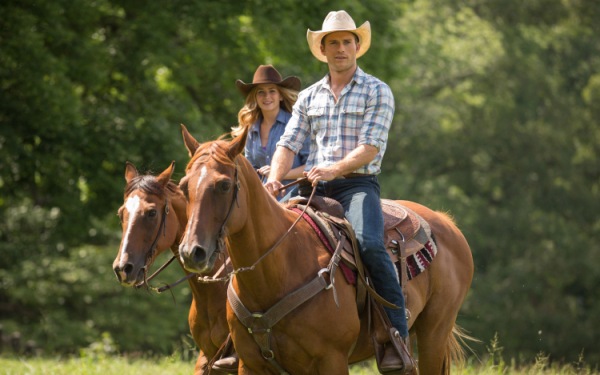 Nicholas Sparks gets writer’s block. Really, he does.

The man behind such steamy meets romantic novels “Safe Haven,” “Dear John,” “A Walk to Remember,” “The Last Song” and “The Notebook” admits to having some occasional trouble getting his fingers and brain in gear.

“You wouldn’t think so with all I have going on,” said Sparks from a ranch in Davie, Fla., to promote his latest novel turned movie, “The Longest Ride.” “But writing and procrastinating go hand in hand.”

In the movie, Britt Robertson plays Wake Forest college student Sophia, who meets professional bull rider Luke (Scott Eastwood) weeks before starting an art gallery internship in New York. On their first date, they rescue an elderly man (Alan Alda) from a car wreck; Sophia helps the man convalesce by reading him old letters that he wrote to his beloved late wife, also an art lover. The two love stories play out in present day and flashback with tear-provoking soundtrack.

Despite all the procrastinating, Sparks gets the job done. He related that he sent then-girlfriend Cathy Cote more than 100 letters after they met as college students during spring break in Florida in the 1980s. Sadly, the parents of five announced they were splitting after 25 years of marriage back in January.

Sparks believes sitting down to write a letter and mail it with an actual stamp remains the most sincere method of correspondence.

“For people I care about, I still do it. In big moments in life, whether it’s a wedding, a birth, a death, the end of the year,” he explained. “Probably the most wonderful gift I get for my birthday each year is from (longtime business partner) Theresa Park. She hand writes the most beautiful letters to me you can ever imagine — about things we appreciate or what we’ve gone through. I’ve saved all of them.”

For Robertson, filming in her native state of North Carolina meant not needing to mail anybody. Everyone came to her.

“There were some benefits,” said the “Under the Dome” actress, 24, who was raised in South Carolina. “I have a huge family, and they wanted to come up and visit. It was summertime, and they were using my place to go to the beach. It was kind of like a vacation for them and challenging for me to balance both. But I love being (in the South). I love the humidity and the heat so it’s nice.”

What did hunky star Eastwood enjoy most about the shoot?

Not having to get on a bull very often. That’s what stunt doubles are for.

“I just hope they don’t ask me to ride it,” he said, pointing to the Longhorn bull hitched outside the ranch house, where interviews were held. “I rode one in real life. I bucked one and was like, ‘One and done!’ But no scars. I’m pretty good.”

Good? You could say that. The model turned actor looks a lot like dear old dad Clint Eastwood, back in his 1960s spaghetti Western heyday.

The 29-year-old, who undoubtedly spends a decent chunk of time at the ab mat, inherited his famous father’s low-key charm, easy smile and crinkly, piercing blue eyes. (The Oscar winner, 84, is about five inches taller, though.)

As for the romantic angle, the off-screen chemistry between Robertson and Eastwood is more sister-brother than say, “Notebook” costars (and ex-lovers) Rachel McAdams and Ryan Gosling.

Robertson, who does share a tres sexy shower with Eastwood in the flick, reports he would spend much of the time making fun of her fingers.

“I’m a nail biter,” she admitted. “He tried to bring it up in every scene!”