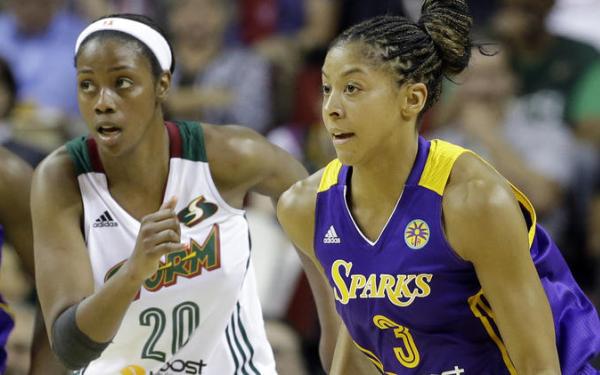 Candace Parker, right, shown with the Sparks last May, won't be ready to play with her WNBA team when the season starts in June.
(Credit: Elaine Thompson / Associated Press)

Candace Parker must be pretty tired. It's only April, but the Sparks star knows she'll be needing some rest when the team's season starts in June.

Parker has informed the Sparks that she won't be ready to start the WNBA season after playing basketball virtually year-round. She plays for the Russian team UMMC Ekaterinburg, which is in the Final Four of the Euroleague this weekend in the Czech Republic.

“It was Candace's decision and she felt she needed to get her body 100% healthy,” Sparks General Manager Penny Toler told the Associated Press. “She wanted to be the best she could be for herself and the team. What we're doing is supporting her in that decision.”

UMMC Ekaterinburg is paying another WBNA star, Phoenix's Diana Taurasi, to sit out the entire 2015 season in order to rest. But Toler said that isn't the case with Parker.

“Candace told me this is not a financial decision,” Toler said. “She told me she's not getting paid at all [by her Russian club]. She feels she would like to play 100% healthy and be the best she could be to have an opportunity to win a championship.”

Parker, who averaged 19.4 points and 7.1 rebounds a game for the Sparks last season, was designated as a core player by the team. But she has yet to sign her contract, meaning her salary doesn't count against the team's salary cap yet and she can't be fined for missing time.

“We have the rights to her and she can't negotiate with anybody else but us,” Toler said. “When she's ready to come back we'll make room.”