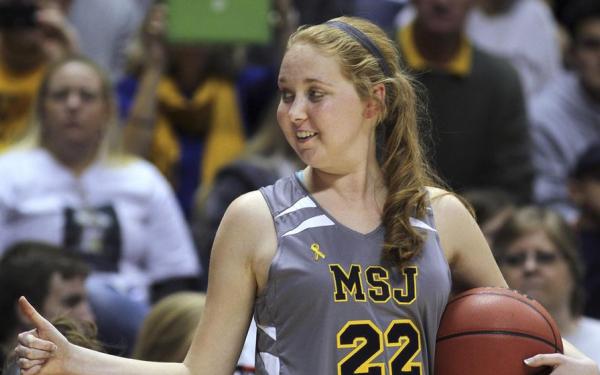 Lauren Hill, who inspired the world by living her dream as a college basketball player while battling an inoperable brain tumor, died Friday morning at age 19.

Hill was diagnosed with a rare form of brain cancer a year and a half ago but didn't let that stop her from achieving her goal of scoring a basket in a game for Mount St. Joseph University.

She did that and so much more.

“She's made an impact on the world,” her Coach Dan Benjamin said. “I've gotten so many emails and phone calls from all over the world. People are contacting me because they want to share her story.”

After being dealt the news she had less than two years to live, Hill decided to make the most of the time she had left -- and wanted to inspire others to do so too.

“I'm spreading awareness and also teaching people how to live in the moment because the next moment's not promised,” Hill told the Associated Press after one of her team's 6 a.m. practices. “Anything can happen at any given moment. What matters is right now.

“Especially after this kind of diagnosis, your perspective on life and what you value changes.”

Her nonprofit foundation, The Cure Starts Now, has helped to raise more than $1.5 million for cancer research.

"Even though I'm probably not going to be around to see it, it's going to help a lot of people," she said. "And that's why we need to keep staying with this and not end it with this game, and keep supporting research."

Hill became friends with Cincinnati Bengals player Devon Still and his young daughter Leah, who is battling pediatric cancer. Still posted photos of himself and Leah with Hill on Instagram on Friday morning, along with a touching message.

“Lauren never let this terrible disease define her,” he wrote. “She didn't let it control whether she lived out her dream of playing college ball and she fought to live pass what doctors originally told her she would. Lauren left her mark on this world by showing people what it really meant to NEVER GIVE UP. So would I say she lost her battle with cancer? Hell no! Because of her fight and selfless act of using her fight to raise an incredible amount of money and awareness, doctors will one day find a cure for DIPG!”

He added: “It hurt like hell seeing the news this morning and i'm not even sure how I'm going to tell my daughter.”

Another superstar athlete touched by Hill's story, Cleveland Cavaliers' LeBron James, tweeted a moving tribute in the form of a letter Friday morning:

You are the true definition of strength, courage, power, leadership, etc etc! Your time spent on earth will never be forgotten. I have that I never got the chance to meet u in person but know you inspired me the whole time! For every life u touched, u made the biggest impact of them by just being YOU!! You're in a far better place now and please don't have to much fun up there w/o all your family and friends. Can u please tell my Grandma I said hello. Don't be afraid, she knows you cause we spoke about u plenty of times.

Until we officially meet again, take care and continue to be that LEADER we all love! #RIPLaurenHill

Hill played in four games and made five layups for Mount St. Joseph before having to leave the team due to her worsening condition. At the end of the season, the players and coaches held their team dinner in her hospital room.

The U.S. Basketball Writers Assn. honored her with the Pat Summitt Most Courageous Award.

“Life is precious,” she told WKRC-TV. “Every moment you get with someone is a moment that's blessed, really blessed.”

Mount St. Joseph will hold a celebration and prayer service for Hill on campus Friday afternoon.

The Associated Press contributed to this story.