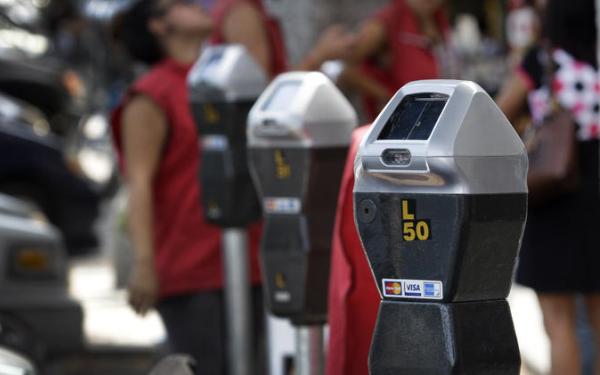 A working group on parking in Los Angeles wants the city to expand the use of high-tech parking meters.
(Credit: Lawrence K. Ho / Los Angeles Times)

Under a new proposal to reform parking in Los Angeles, many parking tickets would cost only $23 — a fraction of the existing fines for common violations.

The idea is one in a long list of suggestions put forward publicly for the first time Thursday by a working group convened by Mayor Eric Garcetti, which has been combing over parking policies since June.

The working group was formed in part as a response to the efforts of activists with the Los Angeles Parking Freedom Initiative. The group argues that L.A. has improperly used parking fines to solve budget problems and maximize revenue rather than ease parking problems.

Last year, the group signaled that it intended to put its reforms -- including capping many fines at $23 -- on the ballot. It then announced it was teaming up with Garcetti through the working group.

Participants in the working group have included Parking Freedom Initiative members Steven Vincent and Jay Beeber, as well as representatives from business groups, several neighborhood councils and the UCLA Institute of Transportation Studies.

In a recently released report, the working group recommended that L.A. slash fines for parking violations that don’t affect public safety to $23 for the first offense, $33 for the second offense of the same kind in the same year, and up to $68 on the fourth offense.

Many such violations now cost drivers more than twice as much: $73 for parking in a prohibited area during street cleaning, for instance. The group said it pegged the fine at $23 to match the median hourly wage in Los Angeles reported by the Bureau of Labor Statistics.

The working group also wants L.A. to expand the use of technologically advanced parking meters that adjust pricing depending on demand, let drivers pay for more time remotely using a smartphone app and charge people only for the time they use.

It noted that L.A. is already using a "performance based pricing" system at thousands of metered spaces downtown, which have increased revenue even as they decreased average parking rates. Plans are in the works to expand that system to Hollywood, Venice and Westwood. The city should "devote more resources to accelerate the rollout," the report stated.

In addition, the group suggested a host of changes to the city's street-cleaning system to cut down on parking citations, including reducing the time frame during which parking is restricted and reassessing street-cleaning schedules to eliminate conflicts with periods of peak parking demand. Between 2008 and 2012, more citations were issued for street-cleaning violations than any other type of parking ticket, the group said.

The group also wants parking fines go to a special account dedicated to parking management and streetscape services, including bicycle parking and sidewalks. The city could ease the budgetary effects by phasing in the new account over several years, the report said.

The group presented its recommendations to a city commission Thursday.

"We have effectively put this issue on the front burner for the city of Los Angeles," Vincent, director of the Parking Freedom Initiative, said Friday. "The issue isn't whether or not there's going to be change in the parking system -- it's what those changes are going to be and how they're going to be accomplished."

Many of the proposed reforms require approval by city lawmakers. Beeber, a recent City Council candidate, said some of them could be a tough sell.

"I don’t think the city is going to be real hot on changing the cost of the tickets" because of concerns about the effects on the city budget, Beeber said. "That’s going to take some pressure from the public."

But he argued that fairer fines would do something "unquantifiable" -- restore public trust. "When the public feels the only thing the city is trying to do is get a couple of extra bucks out of them, they’re not going to be so willing when the city tries to raise taxes," Beeber said.

City revenue from parking tickets swelled from nearly $110 million in 2003 to roughly $161 million last year, according to the mayor’s last budget.

Garcetti spokeswoman Vicki Curry said in a statement Friday that the mayor had already launched several initiatives to ease parking problems, including testing new kinds of parking signs and adopting a policy to allow parking when street sweeping service is canceled.

"We know that parking can be frustrating for Angelenos, and that's why Mayor Garcetti convened the working group to explore these issues and look at ways technology can help people with parking," Curry wrote in an email. She added, "The mayor will continue to look for and review all ideas to improve parking in Los Angeles."

In reaction to the recommendations, Los Angeles Department of Transportation spokesman Bruce Gillman said simply, "We will implement any and all parking policies approved by the mayor and city council."