Doctors at University of California health clinics go on strike 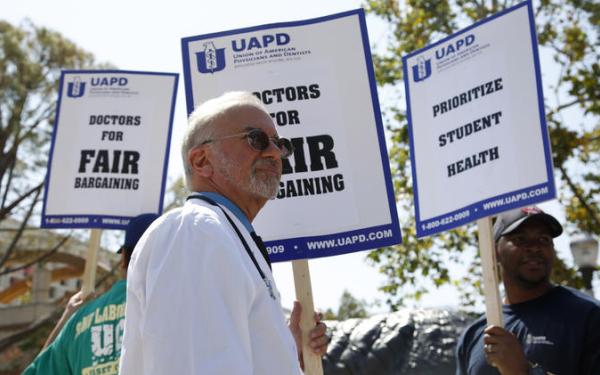 Unionized doctors began a strike Saturday at student health clinics on University of California  campuses in Southern California, saying administrators had acted unfairly during negotiations for the physicians' first contract.

The health professionals on Saturday walked out of UCLA, San Diego, Irvine, Riverside and Santa Barbara, and picketed at UCLA. The strikes are also scheduled for Monday and Tuesday.

Union members say the strike is in protest of the UC administration refusing to provide financial information that they need to negotiate contracts and bolster health center resources.

"We asked how they could provide the chancellors with 20% raises and they won't provide adequate resources to student healthcare services," said Dr. Charles McDaniel, a UCLA psychiatrist.

UC officials said replacement doctors, dentists and podiatrists provide would provide services to students during the strike, and some non-urgent appointments were shifted to different days.

The 130 or so members of the Union of American Physicians and Dentists previously held a one-day strike in late January at all 10 UC campuses. The UC doctors were unionized in 2013.

By not divulging the information, UC leaders show that "they think they are above the law -- that's why doctors are on the picket line today," Dr. Stuart Bussey, president of the union, said in a statement.

Dwaine B. Duckett, UC's vice president for human resources, said UC officials wish the union had continued to negotiate rather than call the second strike this year.

"Strikes that negatively impact our students will not resolve a labor dispute," he said in a statement.

Most of the doctors, dentists and podiatrists at the student health clinics are paid at least $150,000 a year, according to UC officials.

Campus News
What’s the risk of COVID-19 for a healthy young person?
738 views