Friends of L.A. River haul away tons of junk 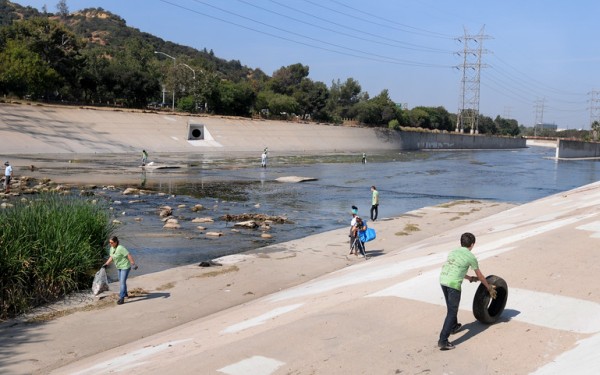 GLENDALE -- On a Saturday morning jaunt down to the Los Angeles River, 16-year-old Nathaniel Byrne scored nearly enough for a complete wardrobe and would-be snack.

He’d filled a large clear sack with a jacket, shirt, pants, gloves and a wrapper for some potato chips.

“Took me 10 minutes,” said Byrne, of Los Angeles, a volunteer for Friends of the Los Angeles River, hoisting up his haul next to Bette Davis Picnic Area near Glendale. “And there’s still more to come.

“I feel better about the environment when I’m making it much more cleaner.”

Thus began 26th Annual Great Los Angeles River CleanUp, an art, music and food-filled round-up of FOLAR volunteers who aim to scoop 20 tons of trash in the next few weeks.

During the nine-to-noon cleanup Saturday across the San Fernando Valley, hundreds of volunteers descended into the weeds of the river’s non-concrete natural bottoms in sections of Griffith Park, the Glendale Narrows Riverwalk, Big Tujunga Wash and Sepulveda Basin.

Next Saturday they’ll scour the middle river around the Glendale Narrows, through Atwater Village and Griffith Park.

Then they’ll march into the lower river on April 18 to skim detritus out of Lower Compton Creek, Willow Street Estuary in Long Beach and the Golden Shore Marine Reserve, one of the last Los Angeles County wetlands. Volunteers can register at http://folar.org/events/cleanup2015/.

It was 26 years ago that poet Lewis MacAdams founded his Friends of the L.A. River group and held an outdoor fundraiser on the Bette Davis glade at Griffith Park, with political activist Tom Hayden in attendance. Someone toted a kayak, but they had to dredge the river for an effective run.

Since then, the non-profit group has worked to restore the mostly concrete L.A. River into a swimmable, fishable, boatable and bikeable riverway central to citizens of Los Angeles. Plans call for restoring an 11-mile stretch north of downtown in hopes of drawing steelhead trout, for a cost of $1.1 billion.

“This is my favorite day,” said MacAdams, now 70, beaming as a small army of volunteers waded into the natural willows and across the shallow river dotted with mallard ducks, snowy egrets and spindly killdeer. In an hour, they’d hauled out seven supermarket carts coated with rotting river weeds. “Because it’s people giving back to a river that has long loved them.

The clean-up crew had descended in a morning haze into the river whose bottom turns soft just east of the Los Angeles Equestrian Center amid the ever-present hum of the adjacent 134 Freeway.

Setting up to blow the cobwebs from the rushes was a Tone in Georgia sextet with bagpipe and keyboards. To complete the art theme, most volunteers donned FOLAR river frog T-shirts designed by artist Christian Kasperkovitz.

Except Melissa Noren, who during her third river cleanup wore her FOLAR T from last year over a pair of knee-high rubber boots..

“There’s a full quilt in here,” said Noren, 48, peering into her plastic bag, one of many should would haul up the river’s trapezoidal wall. “But the jeans were actually looking pretty good.”

“Feels good,” said her 23-year-old son Jake, now aspiring to become an Eagle Scout. “I’ve been to a San Gabriel River clean-up last week with our scout troop. But this is bigger, close to home, so it feels more personal. It’s great to be helping out in the community.”