Wealthy enclaves, especially in L.A. area, slow to save water 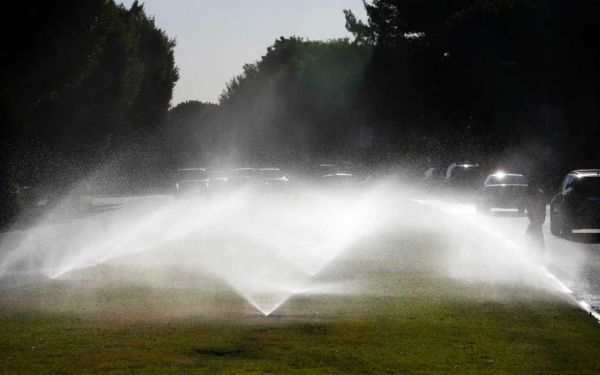 Sprinklers spray water onto the median strips along Sunset Blvd. in Beverly Hills, which is one the the largest users of water in California.
(Credit: Michael Macor / The Chronicle)

BEVERLY HILLS — In the sun-splashed communities that define the Southern California high life, where money flows freely and costs often don’t matter, boosting water rates and socking water hogs with penalties might not do much to fight the growing drought.

The state marched out a plan last week that targets the biggest water users, forcing them to ease back or pay up. But the dazzle of Southern California’s elite ZIP codes doesn’t come easy — nor without a lot of water.

Despite the drought, little has changed in this urban oasis. The taps gush and the sprinklers spin. One morning last week, runoff from yards pooled onto Sunset Boulevard in Beverly Hills and vanished down storm drains.

“I think we’re in denial,” said Kevin Anderson, 54, owner of a Beverly Hills art gallery specializing in 19th and 20th century work. “We’ve gotten so passive about our water use. But that’s the Los Angeleno story.”

Four years of drought, though, have turned careless water consumption into a moral issue debated in the public square — and a potential flash point in California’s long-running conflict between north and south. Excess is losing its cool, but Southern California seems to be slow in changing its famous ways.

While Northern California has plenty of enclaves full of water guzzlers, records released by the State Water Resources Control Board show a more aggressive response to the loud calls for conservation.

The Peninsula town of Hillsborough, for example, is one of California’s wealthiest communities and joins places like Beverly Hills and Malibu on the water board’s list of the state’s 135 biggest users. Under the conservation rules proposed last week, those communities will have to slash water use by a dramatic 35 percent compared with 2013.

The similarities end there, however. Despite the grand houses and sprawling, landscaped grounds that characterize the homes of many of California’s richest residents, Hillsborough already has trimmed 25 percent from its 2013 water use.

Compare that with 3 percent in Beverly Hills and 1 percent in Malibu.

“We got a tough road ahead to meet these reduction targets,” acknowledged Paul Maselbas, an assistant division engineer with Los Angeles County Waterworks, which oversees water use in star-studded Malibu. “We’ve had some difficulty connecting with the people out there.”

That hasn’t been a problem in Hillsborough, said City Manager Randy Schwartz.

“Every time we’ve called for voluntary cutbacks, residents have far exceeded what we asked for,” he said. “The nice thing is that we’re already at 25 percent.”

The cuts in Hillsborough have come despite ordinances designed to keep the town of 11,000 a leafy haven for folks looking for a community devoid of apartments, condos, starter homes and businesses of any kind. Zoning regulations require new homes to be at least 2,500 square feet on lots of no less than a half-acre — and there are plenty of residences and estates far, far larger than that.

But the town has taken measures to keep water use reasonable, including limiting lawn size and requiring drought-resistant landscaping, and will discuss further action at Monday’s City Council meeting, Schwartz said.

That doesn’t mean everything’s perfect. There are still residents putting in water-hungry new lawns and ignoring the conservation rules.

“There are a lot of wealthy people here who don’t care what water costs them, but they have to be more community-minded,” said Zara Fritts, a Hillsborough resident. “But there are plenty of others who have let their lawns go brown.”

It’s been a different story along much of the Southern California coast. In February, the latest month for which state data are available, conservation efforts actually tracked backward, with residents in the greater Los Angeles and San Diego areas using 2.3 percent more water than they did compared with the same month in 20

The Bay Area reduced its water use 8 percent in the same period, and the Sacramento region cut 14 percent.

The overall lax response to voluntary conservation measures prompted state water officials, on orders from Gov. Jerry Brown, to draft last week’s unprecedented proposal to force an overall 25 percent cut on water use across the state.

The required trims will range from 10 percent for water-thrifty cities like San Francisco, Daly City, Hayward and East Palo Alto, to 35 percent for the biggest users. In the Bay Area, that dubious list also includes Vacaville, Atherton and Morgan Hill.

A heavy user who goes through 300 gallons a day might be forced to use 200 instead. But the question of whether Southern California communities that have been loath to conserve will go this far — or move the meter at all — remains open.

Malibu, like many Southern California communities, faces restrictions on outdoor watering that the state has forced all local water agencies to adopt. But few additional rules are in place, and no fines or written warnings have been issued.

The Los Angeles County water department plans to step up its conservation policies in Malibu. Not only is it looking to increase prices for water hogs and get serious about penalties, officials said, but it’s also coming up with ways to penetrate communities that have been aloof. Part of the plan calls for recruiting well-connected neighbors to sound the alarm and organize afternoon garden parties to promote water savings.

“When you have very affluent people, incentivizing with financial penalties is not always the best approach,” Maselbas explained.

Dan Trejo, district manager for the California Water Service Co., which serves several cities just outside Los Angeles, said that while education so far has been the preferred way to push conservation, this may change.

“It’s no joke anymore. This is the real thing, and we’re committed,” Trejo said.

The utility’s customers on the upscale Palos Verdes peninsula have cut water use just 4 percent from 2013 — and it shows.

The tidy lawns in this coastal refuge, stacked atop seaside bluffs, remain a deep shade of green, punctuated by the aqua blue of swimming pools and the terra-cotta roofs of oceanfront villas. Fountains flow freely in the center of the peninsula’s main city, Palos Verdes Estates.

City officials say the water in the fountains recirculates. But they’re considering turning them off.

Not all of Southern California is lagging in its response to drought. East Los Angeles, Santa Ana and parts of San Diego boast some of the state’s best conservation records. But the biggest water users, often places with big homes on huge lots, have skewed the average.

“I’m as guilty as anybody of saying the rich don’t care,” said Stephanie Pincetl, a professor at UCLA’s California Center for Sustainable Communities. She worked on a study with colleagues Caroline Mini and Terri Hogue that linked higher incomes to higher water use in the city of Los Angeles.

“But it’s more complicated than that,” she said. “The rich are more insulated. They can afford higher water rates. But they’re also in a context that doesn’t encourage change very much.”

Mora Jr., 27, who was mowing lawns and watering gardens last week with his father in Palos Verdes Estates, said he worried the drought might dry up the family business. But the company’s 14 clients in the city haven’t cut back on their greenery, Mora said.

“We have homes in West L.A. that have let their lawns go, but not here,” he explained. “A lot of people still want their yards green.”

Barbara Weaver is one of them. The longtime Palos Verdes Estates resident argued that any concessions she might make would probably have little effect on the statewide drought.

Weaver admitted, however, to recent pangs of guilt. She’s started limiting how often she flushes the toilet and collects shower water as it heats up, using it to nourish her plants later.

Those concerns, though, have started earlier and are running deeper in Northern California.

There’s nothing new about Bay Area residents looking for landscaping that doesn’t take much care or use much water, said Diego Torrelio, whose Circle Foot Permaculture in San Mateo does work throughout the Peninsula. But in recent weeks, the concerns have grown exponentially.

“We’re getting a lot of calls from people in Portola Valley, Los Altos Hills and Hillsborough who are really interested in exploring drought-resistant planting, gray water and strategies to preserve water,” he said.

State officials and water experts are warning that communities across California — north and south, rich and poor — are going to have to realize that the drought conditions and the tough conservation measures they require could very well be the new normal for the state.

“It’s going to take a long-term commitment,” said Pincetl at UCLA. “We cannot just go back to business as usual. There just isn’t enough water out there for the long term.”