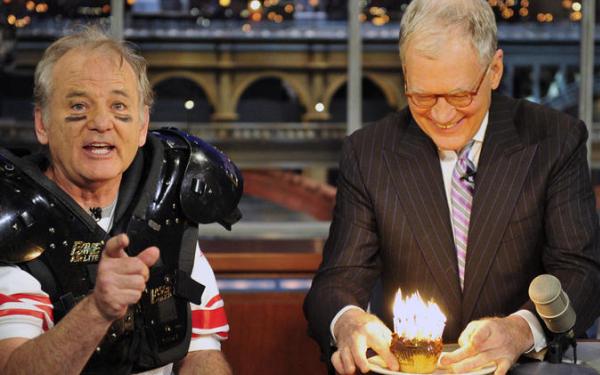 Bill Murray, left, tells the audience not to scream after lighting 30 birthday candles in a cupcake as a gift to host David Letterman for his 30 years in TV on Jan. 31, 2012.
(Credit: John Paul Filo / Associated Press)

Bill Murray was David Letterman's first late night guest on Feb. 1, 1982, and he could be the last.

Murray is one of the stars who will help bid Letterman farewell as he begins his final 28 broadcasts of "The Late Show" on CBS, the network announced Monday.

Letterman is retiring from the late night game on May 20 after 33 years. He joined CBS in 1993 after 11 years at NBC where he was host of "Late Night." His successor at "The Late Show," former Comedy Central host Stephen Colbert, takes over on Sept. 8.