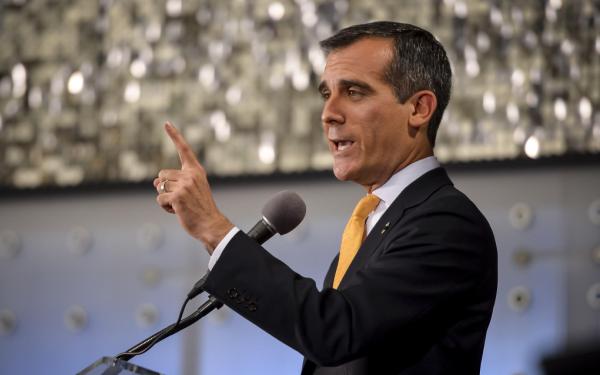 Los Angeles Mayor Eric Garcetti’s State of the City speech this week could be overshadowed by images of city workers protesting outside the event.

Garcetti is set to deliver his speech Tuesday at the Valley Performing Arts Center in Northridge. The State of the City speech typically allows L.A. mayors to lay out their agendas and reaffirm support for city workers.

But this year’s State of the City speech comes amid ongoing negotiations between the city and union leaders, and four days after the union representing 10,000 custodians, tree trimmers and other workers voted to authorize a strike.

“The workers are very aware of the State of the City address,” Itzcalli said. “And they are anxious to call on the mayor to fix L.A.”

Unions typically seize on addresses to air grievances about city concerns, leveraging the heavy media presence at the event. In 2012, city workers gathered outside Paramount Studios in Hollywood during then-Mayor Antonio Villaraigosa’s State of the City speech, with employees calling for Villaraigosa to kill a proposed layoff plan, which he ultimately did.

This year’s address comes as city officials struggle to reach a deal for a new contract for workers. Roughly 20,000 employees have been without a new contract since last July, with bargaining disputes believed to center around health care costs and salaries.

The strike vote doesn’t ensure a strike, but it does allow workers to walk out.

SEIU 721 member Stacee Karnya said in a statement released through the union that “workers have been left with little choice because we do not have a firm commitment from City Hall on our proposals that would generate revenue to fix our streets, trim our trees, clean our beaches, help children get to schools safely, and ensure our own kids have a secure future.”

The strike vote came after hundreds of workers at the Los Angeles Bureau of Sanitation failed to show up at their jobs last week, a bureau spokeswoman confirmed.

Garcetti spokesman Jeff Millman said in an email Sunday that “We remain committed to reach a fair and responsible contract, and both parties will be back at the bargaining table this week.”

At Garcetti’s address last year, the mayor singled out a city worker for fixing a broken air conditioner and talked up his back-to-basics agenda.

In a brief interview last week, Garcetti said this year’s speech would touch on the leadership role Los Angeles is playing in the state drought, among other topics.