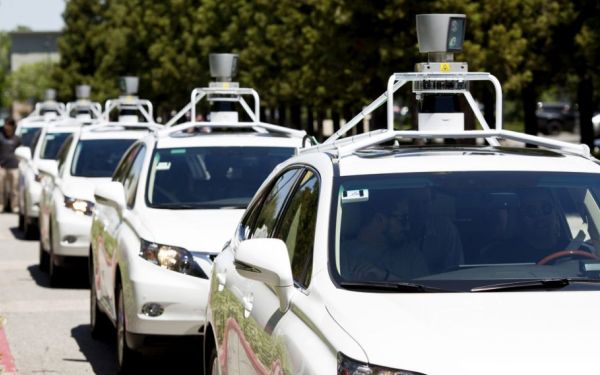 Every industry has its doomsday scenario. Usually it involves technology.

The 19th century textile industry’s apocalyptic fears revolved around the mechanical loom, which threatened to put weavers out of work by automating their jobs. The horse-and-buggy trade was terrified of Henry Ford’s Model T.

For today’s auto insurers, the harbinger of doom is the self-driving car.

“Autonomous cars will be on public roads in the not-so-distant future,” warned a report issued earlier this year by PricewaterhouseCoopers. “Ignoring them or not taking decisive action could be fatal.”

In public, industry leaders still characterize driverless vehicles as a problem to be dealt with in the far-off future.

“We’re looking at a transformation that’s going to begin in the next decade, but take 30 years to be complete,” said Robert Hartwig, president of the Insurance Information Institute.

But behind conference room doors, insurers are worried. This year at least four publicly traded insurance companies — Progressive Corp., Cincinnati Financial, Mercury General and the Travelers Cos. — listed driverless vehicles among the risk factors in their annual reports to the Securities and Exchange Commission.

Auto insurance is a $200 billion industry that could lose big in the long term — as cars function more like computers on wheels, the thinking goes, the number of accidents will decrease, and with that, so will the cost of insurance.

There are already cars on the road packed with sensors and software that allow them to operate semiautonomously — the Mercedes-Benz S550 Coupe is outfitted with an adaptive cruise control that can navigate a traffic jam. Google has said it plans to introduce a version of its automated car by 2017. Nissan recently moved up the release date of its own vehicle to 2018.

Such technology “could disrupt the demand for our products,” Travelers wrote in its SEC report, “and we may not be able to respond effectively.”

Though insurers are well aware that autonomous vehicles pose a threat, no one is quite sure what to do about it.

As a car’s software tackles an increasing amount of the driving responsibility, said Robert Peterson, a lawyer specializing in insurance at Santa Clara University Law School, the question of who is responsible for an accident gets especially complicated.

Early driverless cars will likely require humans to take the wheel in certain situations. Who is at fault if a car fails to do so and crashes? What if a car is on autopilot and strikes a person in a parking lot? Or if two fully autonomous cars hit each other?

It’s clear that someone needs insurance — the driver, the car manufacturer or the company that made the software the car runs on. What’s not clear is who.

How much a person pays for car insurance is already determined by really complicated math. To decide how risky it is to insure a 25-year-old woman driving a nonautonomous Honda Civic in Oakland, for example, an insurer uses troves of data on the frequency and severity of past accidents for women, for Oakland drivers and for owners of the same vehicle, among other factors. This kind of data is crucial. Insurers are legally required to justify the rates with state regulators — and that justification is based mainly on the data.

Insurance is an industry that predicts the future based on the past, but autonomous vehicles offer no data set on which to base predictions because they are not yet available to the public to drive. Without history, insurers have little by which to judge risk.

Most of what insurers insure against is human error, which is responsible for more than 90 percent of accidents. By using sensors to map a car’s environment and software to respond to it, the number of accidents is expected to decrease dramatically, though researchers quibble over how much exactly. One estimate suggested that driverless cars will make auto insurance about $475 cheaper every year.

“As the personal responsibility of the 'driverless’ shrinks, so, too, will much of the need for insurance covering a person’s liability,” Peterson said.

Eventually, Peterson said, it may be necessary to establish an entirely new system of insurance for accidents in which there is no clear fault — perhaps something similar to the National Vaccine Injury Compensation Program, in which vaccines include a tax to compensate the occasional patient who suffers side effects.

In the future, perhaps there will not be a need for traditional motor insurance at all, but only coverage to protect against risks like damage or theft.

Still, insurers are wary of preparing for curves they can’t predict.

“Insurance companies are less likely to proactively design a product to define the marketplace and are more likely to respond to that changing marketplace,” said Eric Madia, the vice president for auto insurance products at Esurance, a subsidiary of Allstate. “It’s hard for it to go the other way.”

The insurers’ task is further complicated by the fact that each state has different regulations, meaning insurers would need to develop 50 different plans for autonomous cars. Some states also include requirements that could hinder plans tailored to driverless cars — in California, for example, insurers are required to base policies on a driver’s record, which matters little when a computer is in control.

As cars become more like computers, they will receive frequent software updates that can change the very way they work. That turns model years into moving targets, making it even more difficult to predict the risks associated with a certain vehicle.

Madia said that Esurance began discussing driverless cars in the executive suites only within the past two years, though the conversations are largely hypothetical.

For now most of his interest in driverless cars is personal — Madia drives a Tesla, which in two months is slated for a software upgrade that will allow the car to steer itself on highways. His company’s official strategy is to wait and see what happens.

“We can’t speculate based on hypothetical scenarios,” he said.

Those who study the industry say that insurers need to become involved in developing new regulations for autonomous vehicles now — before they hit the road.

“Any insurance company wishing to control its own destiny must act now; else, it risks subjecting itself to the whims of the market,” the Casualty Actuary Society wrote in a 2013 report.

At MetroMile, a San Francisco insurance startup that offers insurance per mile driven, CEO Dan Preston said he imagines calculating different policy rates for miles driven by man and machine. Preston was critical of many others in the industry for not thinking ahead when it comes to self-driving cars.

Still, even Preston only has rough ideas for now. Echoing other insurers, he pointed to the new policies MetroMile created for ride-hailing platforms such as Uber after it became clear the current ones did not work. The insurance industry, he said, will just have to adapt.