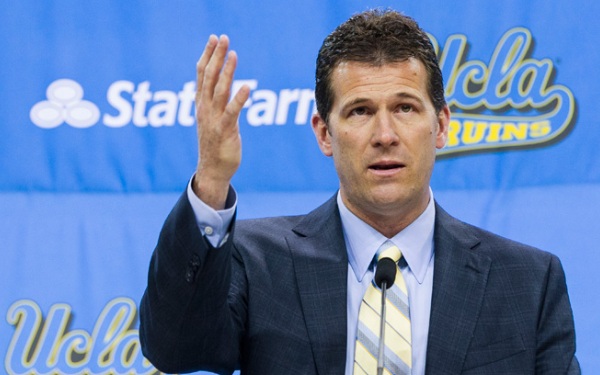 State lawmakers from both parties are sending the University of California an angry message by advancing a bill to cap compensation for UC employees at $500,000 under penalty of losing public funding.

The bill, approved by the Assembly’s higher education committee last week, is a prime example of how Gov. Jerry Brown’s concerns over high spending at the public university have spread to the state Legislature, where the bill is one of five in play — all meant to bring UC to its knees by reining in its spending, restricting its ability to raise tuition and ending its constitutional autonomy.

The measure, AB837, and the other bills get at the heart of the irritation that students, lawmakers from both parties and Brown feel toward UC. Their complaint: The university keeps increasing compensation for its highest-paid employees while demanding that students pay more tuition and that the state contribute more toward its bottom line.

“As a Legislature, we have a right to ask where we should appropriate people’s dollars, because student tuition is skyrocketing,” said the author of AB837, Assemblyman Roger Hernández, D-West Covina (Los Angeles County).

UC has bumped up next year’s tuition by 5 percent, to $12,804, and expects to raise it by up to 28 percent over five years. UC President Janet Napolitano is asking the state to buy out the tuition hikes by adding $220 million to UC’s $3 billion state allocation. Brown is offering $120 million more — but only if UC keeps tuition flat.

Napolitano says UC needs the additional money to maintain its status as one of the world’s best research institutions, and that top-shelf academics won’t want to work at UC if salaries and benefits aren’t in the ballpark of what private competitors like Stanford and Harvard are paying.

Some state lawmakers think one solution is to legislate a more austere landscape at UC.

Of UC’s 195,000 employees, 387 earned at least $500,000 in 2013, the most recent data available. That’s up from 130 employees five years earlier. Even adjusting for inflation, the number of employees earning in this range more than doubled in that time.

Hernández also pointed to more than 400 employees who earn in the $400,000s and could soon top the half-million-dollar threshold.

But — as UC officials quickly point out, and as state lawmakers readily acknowledge — nearly all the money for those sky-high salaries, 91 percent, comes from non-state funds. Most employees earning that much are coaches paid from ticket sales and media deals, or doctors whose wages come from hospital revenue rather than tax dollars or tuition.

The Assembly’s higher education committee gave bipartisan support to the salary cap on Tuesday with a 10-3 vote, despite strong opposition from UC.

“Establishing an artificial barrier to competitive and fair pay would severely limit (UC’s) medical enterprise and campuses from recruiting qualified candidates,” Steve Juarez, an associate vice president for UC, wrote in a letter to the committee. He warned that many employees would quit if the bill became law.

Even those who voted for the bill said it should be amended to cap only state-funded salaries.

“I don’t think the public or the Legislature want to see exorbitant salaries,” said Assemblyman Jose Medina, D-Riverside, who chairs the committee. “At same time, we want to make sure that UC is able to attract people at all levels. We need to find a balance.”

The trouble comes when UC tries to figure out where all the salary money comes from, the state or somewhere else.

Asked by The Chronicle in recent months to separate out state-funded compensation, UC officials said that was too hard to do.

The third, Chancellor Nicholas Dirks of UC Berkeley, may not actually fit the category because his $501,000 salary is supported by a $50,000 contribution from alumni, his spokesman said.

Also in question is whether another employee should be added to the list: Napolitano, who earns a $570,000 salary and receives thousands of dollars in housing and car allowances. Some of that total comes from endowment funds. But most is paid by campus contributions whose funding sources shift yearly, said spokeswoman Dianne Klein.

The lack of accurate, easily accessible data about the source of UC compensation led Assemblywoman Catharine Baker, R-San Ramon, to oppose the bill. But she said she supports it in principle.

“I think we should demand, 'Who is making what salaries, and what component of that is private and what part is coming from state money?’” said Baker, vice chairwoman of the higher education committee. “That’s information that we need to have before we set a salary cap.”

Ultimately, the lawmakers’ efforts to regulate UC’s salary decisions might not hold up under the state Constitution, which grants autonomy to UC.

But whether the bill passes is beside the point, Medina said. He and other lawmakers want UC to get the funding it needs to stay on top, he said. But they also want the university to know it should not act like a private institution.

“The message is, we’re concerned about how they spend their money,” Medina said. “And it’s our responsibility to oversee spending.”

Beside the AB837 salary cap bill, here are five bills making their way through the Legislature:

AB1317 (Rudy Salas, D-Bakersfield) UC would be asked not to increase, and California State University would be prohibited from increasing, executive compensation when the tuition is raised at any time in the previous four years.

AB1349 (Shirley Weber, D-San Diego) Would establish the California First Act, requiring CSU and requesting UC to guarantee that all eligible California undergraduates be admitted to at least one campus if they apply in time.

Here is a sampling of compensation for UC employees. They are among 387 who earned more than $500,000 in 2013, the most recent data available. Of all employees earning at least half a million dollars, only Washington, Olian and Dirks are paid from state funds, UC officials said. The others are paid from private sources, such as revenue from campus athletics or UC hospitals.

Where the pay above base comes from

Marie Berggren - Treasurer of the regents*, Office of the UC President