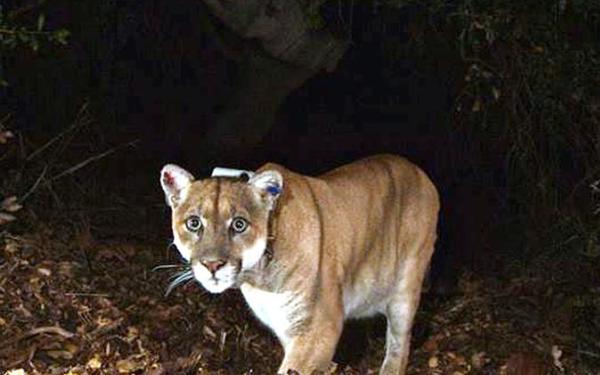 P-22 made the news again after being trapped in a crawl space in a Los Feliz home on Tuesday, April 14, 2015.
(Credit: Associated Press)

P-22, the mountain lion living in the Santa Monica Mountains, isn’t the first animal to get its 15 minutes of fame in Los Angeles.

In a land where it's easy to become an instant celebrity, it’s no surprise Angelenos have an affinity for cute animals with rambunctious personalities.

Now that people can take a photograph or film their wildlife encounters with cellphones, these animals draw attention unlike any other time in history -- some even wind up with Twitter accounts.

In Southern California, some of its most infamous celebrity animals are bears.

Meatball the bear, also known as Glen Bearian, rose to fame in March 2012 after a woman assuming his identity began tweeting about his random jaunts through the suburbs of Glendale.

One particular trip drew so much attention that his quest to find food and his eventual capture  aired on live TV.

The 400-pound black bear famously broke into a refrigerator at a Glendale residence and treated himself to Costco meatballs. The persistent bear returned again and again to the city’s neighborhoods, foraging for tossed-away food.

As residents and TV cameras watched, California Department of Fish and Wildlife officials shot Meatball with sleep-inducing darts and trucked him to a nearby forest.

But the taste of food was too intoxicating for Meatball and he made his way back to the Glendale area. Wardens tranquilized him and sent him packing to a sanctuary near San Diego.

In Ventura County, a venomous white cobra slithered its way around a neighborhood last September before being caught.

After animal control officers searched dozens of yards and properties, they found the snake hiding beneath a stack of wood in a semi-rural Thousand Oaks neighborhood.

But not all animal encounters have been friendly.

Last April, authorities killed an aggressive mountain lion that stalked a mother and her two children during a hike at Whiting Ranch Wilderness Park in Foothill Ranch.

The O.C. woman and passersby were unable to scare away the cougar from the popular hiking trail. When authorities arrived, the cougar marched directly toward them. The game warden shot and killed the lion.