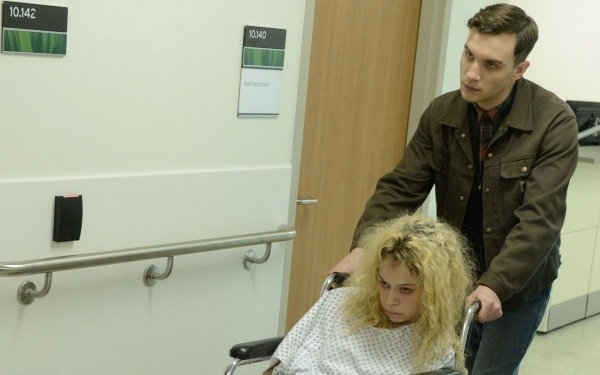 A still of Tatiana Maslany and Ari Millen in an upcoming Season 2 episode of "Orphan Black"
(Credit: BBC America)

If there are times you feel you don’t know who you are, imagine life for Tatiana Maslany.

As the star of “Orphan Black,” the cult sci-fi series about clones, the Canadian actress often has to interact with herself. In a dream sequence at the opening of Season 3, four of her many characters — Sarah, Cosima, Alison, Helena — are together at a backyard party. In one shot, three of them can be seen talking together.

How is this done? Carefully, of course, with Maslany playing each character — all with distinct personalities — one at a time and the film being put together.

So far the series has been about the clones discovering one another and their origins — think mad scientist and “The Island of Doctor Moreau.” The clones have developed a sisterhood to protect themselves from unsavory groups who see them as science experiments to be exploited.

In the Season 2 finale it was revealed that there is a new line of militaristic male clones — Mark, Rudy and others — played by Ari Millen. He says watching SAG Award and Golden Globe nominee Maslany shooting a clone dance party scene was the best advice he got for the roles.

“That was no small feat. I think acting is a private process, and we all make our own decisions, but when you have someone doing something so unique and so technical, just watch,” says Millen, who has had recurring roles in Syfy’s “12 Monkeys” and the CW’s “Reign.”

“I saw her ease, just taking time to breathe and just doing one at a time,” he adds. “I think that’s the greatest lesson I learned from her.”

Maslany did four characters for her audition. Then “Orphan’s” writers added a fifth character midway through Season 1 and two more in Season 2. The 29-year-old actress, who plays the young version of Helen Mirren’s character in the recently released “Woman in Gold,” says she has gotten a lot of say about how the characters are developed.

“I’ve had a very unique experience on this show wherein I’m able to give my input and help mold the characters,” she says. The actress, who had been in some successful series in Canada, adds that she didn’t realize what she was getting into when she signed up for the BBC America show, which now has a worldwide following.

“I guess, for me, the biggest change is the opportunities that are now in front of me, and the sort of scripts that I get to read or directors I get to meet who I would never have met prior to ‘Orphan Black,’?” she says.

Maslany also gets recognized more on the streets by fans and found that different groups relate to different clones. Young women like the nerdy, alt-style Cosima, while “middle-aged couples are really into Alison,” the suburban housewife. Most associate her with the main character, Sarah, the single mother, and Helena, the crazy punk Russian.

Sometimes even Maslany gets confused. One time she had been doing scenes for a couple of days as Tony, a transgender clone, with Jordan Gavaris, who plays Sarah’s adopted brother, Felix, on the show. “And then I had to switch into Sarah halfway through the day and I didn’t know who she was anymore,” says the actress. “I had no idea. I felt like a deer in headlights.”

Season 3 should be interesting for Maslany and Millen as their different clones encounter each other. The two actors originally met in high school at an improv competition in Canada. She represented Regina, Saskatchewan, and he Kingston, Ontario.

“It’s not important,” Maslany says with a smile telling you the answer. “Spirit of loving competition.”