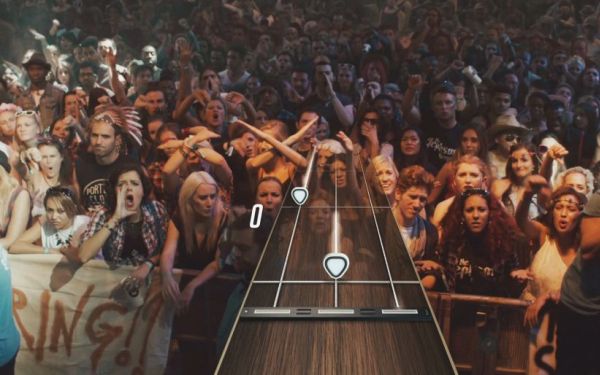 In this screenshot from the new "Guitar Hero Live," the game's audience boos and grimaces because the player is missing notes.
(Credit: Activision)

This time, instead of asking fans to continually buy game discs to access new music, “Guitar Hero Live” will tap into a special online channel with an updated library of new songs.

Players will also be able to square off against competitors online, including a virtual audience that cheers or jeers depending on how well they are doing.

The $100 game includes a redesigned guitar controller that is not compatible with previous versions of the game. But it will work on Android and Apple iOS mobile phones and tablets, along with PlayStation 3 and PlayStation 4, XBox 360 and Xbox One and Nintendo Wii U.

“It will be a living content system that will never feel stale and not require you to go out and purchase a bunch of discs just to get the music you want to hear,” Tyler Michaud, Activision’s senior director of product managment, said at a recent preview.

The original “Guitar Hero” was released by publisher RedOctane in 2005 and ignited a popular but short-lived genre of music rhythm games that included competitors like “Rock Band” and “Rock Revolution.”

At one point, “Guitar Hero” sales generated more than $1 billion a year in revenue for Activision and even got some credit for a resurgence in music sales. The game also caused Detroit Tigers relief pitcher Joel Zumaya to miss the 2006 American League Championship Series against the Oakland A’s because he hurt his arm overplaying “Guitar Hero.”

But by 2010, there were eight “Guitar Hero” releases, eight expansion packs and various guitar game controllers. That market oversaturation, coupled with the recession of the late 2000s, killed sales and Activision discontinued the “Guitar Hero” series after poor sales of 2010’s “Guitar Hero 6: Warriors of Rock.”

Michaud said Activision always wanted to bring the series back, but not before “we had real innovation that transforms how you experience this game.”

As before, “Guitar Hero” involves a guitar-shaped controller that lets players pretend they’re in a band. And the object of the game is still to strum all the notes in the right sequence with a quickly flowing highway of notes on the screen. Players rack up points for each correct note played.

What’s different in the new game, due out this fall, is the setup. Instead of a vague, unfocused view of an audience watching a concert in the background, the revamped game has video of real people acting as audience members, and they react instantly to how well the player is doing.

If the player is missing notes or off beat, the audience boos and their faces show disgust. If the player starts hitting the notes, the boos turn into cheers.

Other band members on the virtual feed also react positively or negatively as the game player turns to them. Even before a player’s turn starts, the video shows typical backstage preparation that band members go through before the curtain rises. A teaser video released Monday shows some of that pre-show band preparation.

During the demo, the audience and band reactions did increase the pressure on the game player to perform well.

The game will also be playable through Guitar Hero TV, a 24-hour online video music network accessed through a button on the guitar controller.

The site can also be used to challenge friends online or to compete against random players matched by their skill level.

Players can use Guitar Hero TV to find different songs to play. Activision said the artists on board for the new game include the Black Keys, Fall Out Boy, My Chemical Romance, Gary Clark Jr., Green Day, the Rolling Stones, Ed Sheeran and War on Drugs.

“You won’t have to buy another disc to get an update, it will just update,” Jackson said.

Michaud said access to Guitar Hero TV won’t include a subscription fee, and the game itself can be played without spending cash beyond the initial cost.

Still, Michaud declined to discuss Activision’s plans for other possible revenue-generating features that could be added to the game, saying the company wanted to save that for this year’s big video game convention, Electronic Entertainment Expo, in Los Angeles in June.

Activision isn’t the only one trying to bring the band back together. Earlier this year, game company Harmonix announced it was bringing back “Rock Band” after a nearly five-year haitus.

But with rumors of a new “Guitar Hero” in the works, analyst Arvind Bhatia of Sterne Agee said in a research report that he didn’t expect initial sales to approach their former glory.

“At its peak, 'Guitar Hero’ generated in excess of $1 billion in retail revenue, though we would expect much more modest revenue (at least initially) once the franchise is re-launched,” Bhatia wrote.

Games & Gadgets
Gaming against sexual assault, with 'Decisions That Matter' and other video games
1,504 views