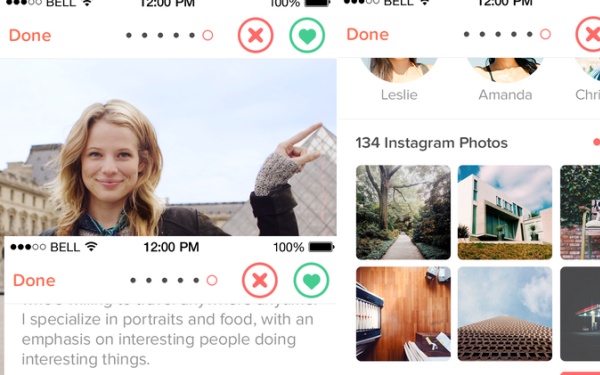 To put your photo on dating app Tinder, you have to pull it from your Facebook profile. But many users have wanted to share more photos.

Beginning Wednesday, Tinder users can also show off the 34 most recent photos from their Instagram accounts to potential matches.

The new feature underscores how some teenagers and young adults are gravitating from Facebook to newer apps such as Snapchat and Facebook-owned Instagram. A “substantial percentage” of people on Tinder already list their Instagram username in their bios, said Tinder President Sean Rad.

For Tinder, the Instagram link is one of several new additions announced Wednesday that the West Hollywood company hopes will keep users engaged even as an onslaught of competitors tries to win them over. Match-seekers will be able to see friends of friends that they share in common with other users and they’ll be given someone’s complete list of interests as opposed to only those that are mutually shared.

“We’re listening to our users, our vision,” Rad said, noting that the new features should lead to more fruitful connections among the 26 million pairings on the app each day.

Other dating apps are trying to replicate Tinder’s success but haven’t produced anything Rad finds interesting.

“What they all miss is this is about a community, and Tinder’s users define Tinder’s success, not Tinder’s features,” Rad said. “Everyone is on Tinder. The cool kids are on Tinder, so if you really want to unseat Tinder, you need to do something 10 steps better and I’ll welcome that.”

Recently, Tinder begin charging users for extra features including ad-blocking. The app’s first ad, which featured Bud Light, came this month. Rad called it a success based on how many people watched the entire video, clicked on a link in the ad and approved of it by swiping right in the app. He said there are no immediate plans to run a second advertising experiment.

Some users have been less thrilled about having to pay for the ability to “like” an unlimited number of people. Rad said the intention of the change was to make users more “mindful and selective” to “increase quality of matches and the number of matches that resulted in conversations.”