Experts disagree whether earning a college degree is worth the expense 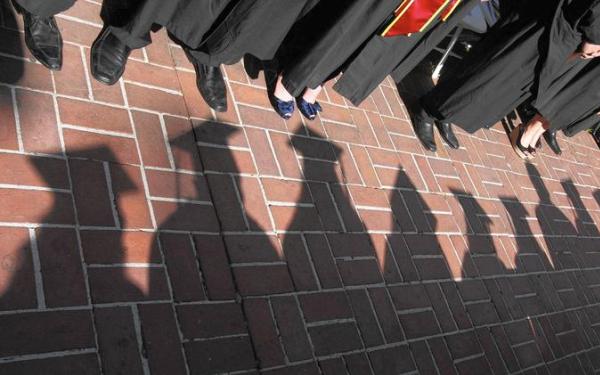 Many high school seniors and their parents are in the throes of deciding which college to attend and figuring out how to pay for it. The biggest question for those in the freshman applicant pool is where to enroll, not whether to go at all.

Yet behind those family-by-family discussions is a larger economic debate: Does it make financial sense for such a large swath of American society to attend college in the first place?

No one questions that college can be a life-changing experience intellectually and socially. But in a recent flurry of books and studies, economists and other experts focus on whether lifelong earnings are boosted enough by a diploma to make all the tuition costs and student debt worthwhile.

And in a controversial challenge, a Silicon Valley businessman is offering coveted subsidies to bright young people who drop out or forego college to chase dreams of high-tech inventions and entrepreneurship.

On the strongly pro-college side, Mary C. Daly, senior vice president of the Federal Reserve Bank of San Francisco, said there is overwhelming evidence that a bachelor's degree gives people a financial leg up. Still, she said students and families should closely compare tuition costs and grants because the advantages of a college education take longer to achieve if costs and debt are large.

A recent study Daly co-wrote estimated that college graduates over the last decades have earned an average of $20,300 a year more than people with just a high school education. The report, "Does College Pay?," said that the pay advantage increases over time, from about $5,000 in the first year after graduation to $28,000 15 years later. Even in the recession, college graduates maintained higher pay and lower unemployment rates.

"It's an irrefutable fact that college gives you a significant and persistent advantage decade after decade," Daly said in an interview.

The study offers a calculator that considers such factors as tuition, potential earnings lost while in school and personal savings and spending habits. Under its rough formula, a graduate from a relatively affordable state school, with $9,000 annual tuition, breaks even on the investment and begins earning additional returns in nine years. With a $45,000-a-year tuition at a private university, the costs won't be recouped until 17 years after graduation, the report said.

Daly urges people who want to go to college to consider less-costly public universities if private ones don't provide enough grants, or possibly start at community colleges and transfer to a four-year school. No matter the campus, earning a bachelor's is the important step if you have the aptitude, she said.

Peter Cappelli is more skeptical in his soon-to-be-released book, "Will College Pay off? A Guide to the Most Important Financial Decision You'll Ever Make.". A management professor at the University of Pennsylvania's Wharton School, he acknowledges that college graduates on average earn more than those who stopped education after high school. Yet, he emphasizes there are huge variations and no guarantees the salary advantage will continue.

Students with some degrees land high salaries "but many others would have been better off financially by not going at all," Cappelli said.

He attributes the pay advantage mainly to the drop in blue-collar wages as manufacturing jobs moved overseas, not so much to inherent benefits of a college education. And he notes that many college graduates take jobs that don't require diplomas and displace less well-educated people.

Beyond looking closely at majors and financial aid, Cappelli urges families to examine schools' records of graduating students within four years. If colleges have bottlenecks to courses or require too many classes, costs of extra school years make it more difficult for college to pay off, he said.

In one of the most high-profile challenges to college attendance, PayPal co-founder and venture capitalist Peter Thiel funded a San Francisco foundation that pays young people $100,000 a year for two years to pursue their ideas and business plans outside of school.

Thiel is a libertarian who earned an undergraduate and a law degree from Stanford and later questioned formal education's constraints. His program's philosophy is "that there is no one path to success or a fulfilling career," said Michael Gibson, the foundation's vice president of grants. "The establishment is saying if you don't go to college, your soul is lost and your future is quite dim. We are saying you can have perfectly fulfilling careers outside that path."

Gibson said he is not advocating that most college students drop out, but he said that the fellowships encourage "diversity in outlooks and accomplishments."

Although about 10 fellowship alumni have returned to school, he said he expects most won't because they have started their own lucrative businesses in such fields as high-tech, energy and healthcare or are succeeding elsewhere.

Daly of the Federal Reserve, meanwhile, cautioned that the relatively small Thiel project does not disprove the monetary value of a college diploma.

"There are certainly people who are not going to need a four-year degree to achieve their dream and potential," she said. "But that's not the average person."