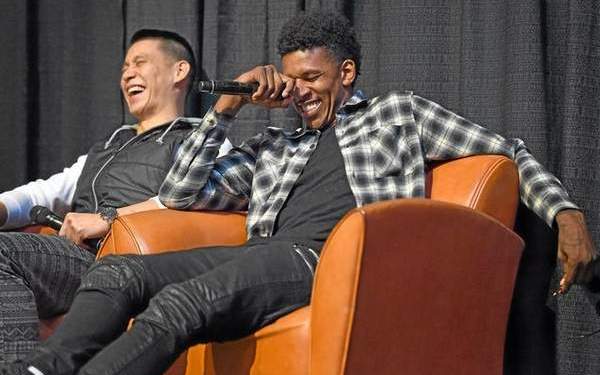 This seemed nothing more than an accident after Lin and Young represented five injured Lakers players who had their exit meetings with coach Byron Scott and general manager Mitch Kupchak on Tuesday, a day before the Lakers (21-60) host their season finale against the Sacramento Kings (28-53) at Staples Center.

But this hardly marked the first time Young briefly stole Lin’s spotlight. Young infamously crashed Lin’s post-game interview in late February following a rare win over Boston, an antic that aired on and sparked scorn from both Scott and Kobe Bryant.

Young will soon enter the offseason with more scrutiny after averaging 13.4 points on a career-low 36 percent shooting and having occasional clashes with Scott.

“I blame it on the rim,” Young joked. “The rim was tripping this year. Next year, I’m going to take her on a date and treat her a little better.”

Young said he feels “confident” he will stay with the Lakers. But the team will entertain trade offers for him, according to a team official familiar with the front office’s thinking. Young, who still remains under contract for , may not attract much interest considering his poor play and the Lakers’ reluctance to include draft picks just to expend him.

“I’ve been prepared for everything,” said Young, who has stayed sidelined the past two months because of a fractured left knee. I just roll with the punches and keep doing what got me here.”

Young also downplayed his clashes with Scott. Young told Los Angeles News Group two weeks ago that he takes Scott’s criticism with “a grain of salt” and he considers the feedback “a little unfair.”

“He wants me to get better,” Young said of Scott. “If he ain’t talking about you, he don’t care about you.”

Lin also enters this offseason with uncertainty, albeit for different reasons. He will become an unrestricted free agent, and the Lakers remain skeptical about keeping Lin after he averaged 11.2 points on 42.4 percent shooting, 4.6 assists and 2.2 turnovers as mostly a reserve.

Lin called the Lakers “definitely an option for me to consider.” But he added he feels more concerned with his role than the size and length of his contract after making $14.9 million.

“I want to find a good place and hopefully the best place I can fit in at,” said Lin, who said he will not need surgery on his sore left knee that kept him sidelined for the past week. “I want to be able to find a good fit for me.”

He acknowledged it “hurt” to lose his starting position after 19 games and to even miss one game because of a coach’s decision. Lin also reporting feeling uncomfortable with Scott’s system that puts less emphasis on pick-and-rolls. But Lin adapted more to Scott’s system, while Scott gave Lin more freedom to run pick-and-rolls. Scott also has credited Lin for taking his criticism constructively and playing through various injuries.

“His respect for me and my respect for him,” Lin said, “has grown steadily throughout the course of the season.”

As for Young, Scott became increasingly annoyed with his work habits and arriving late to games. Scott told Young he needs to minimize one-on-one play and pass more out of double teams to improve his shooting woes.