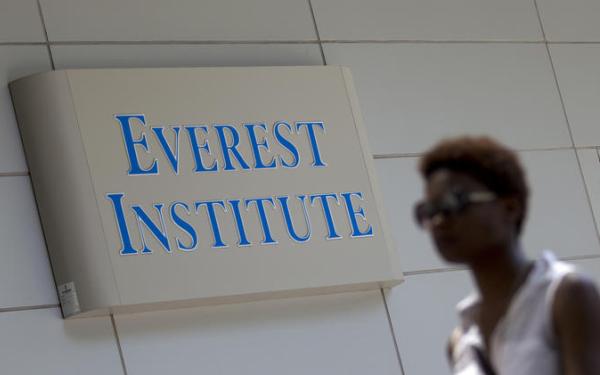 The fine represents another blow to ailing Corinthian, which over the last year has been selling off and closing dozens of campuses across the country amid a crackdown by the Education Department. Job placement rates for Corinthian graduates have been at the center of the controversy: The department restricted Corinthian's access to federal student aid last year amid concerns the company falsified the data.

The fine applies only to one branch of Corinthian's operation — the Heald College system, which operates 12 campuses in California, Hawaii and Oregon — raising the potential for more penalties at Corinthian's other campuses. Many of the other schools, which operated under the Everest College and WyoTech brands, have been sold in recent months.

In a letter to Corinthian outlining the fine, the Education Department alleged widespread deception. In some cases, Heald paid temporary employment agencies to hire graduates in short-term jobs so they could be counted as “placements.” In other instances, Heald considered graduates “placed” in jobs they had well before they enrolled.

At Heald's Honolulu campus, staff members considered a 2011 accounting graduate to be “employed in the field” based on a food service job she had at Taco Bell since 2006. Documents also show Heald considered business administration graduates to be successfully placed working retail jobs at Safeway and Macy's.

In total, the department found 947 cases of placement misstatements at Corinthian's Heald schools.

“Instead of providing clear and accurate information to help students choose which college to attend, Corinthian violated students' and taxpayers' trust,” U.S. Under Secretary of Education Ted Mitchell said in a statement. “Their substantial misrepresentations evidence a blatant disregard not just for professional standards, but for students' futures.”

A Corinthian spokesman, Joe Hixson, said in a statement that the department's conclusions were “highly questionable” and “unsubstantiated.” He said the department had not given the company any time to review or respond to the allegations. The company plans to appeal the decision, he said.

“These unfounded, punitive actions do nothing to advance quality education in California,” the statement read, “but would certainly shatter the dreams and aspirations of Heald students and the careers of its employees.”

For so-called career colleges such as Corinthian, placement rates play a key role in marketing and recruiting efforts, serving as a benchmark that indicates the value of a degree in the marketplace.

Advocates who have followed Corinthian and other for-profit colleges said the Education Department's findings underscore the need to hold schools accountable for misrepresentations.

“Placement rates are a critical indicator of whether a career education program is actually doing what it's supposed to,” said Lauren Asher, president of the Institute for College Access & Success, an Oakland nonprofit that focuses on student debt issues. “For a program to inflate its job placement rates means they're selling students a bill of goods.”

The Education Department said that Heald College is no longer allowed to enroll students and that the company must help current students finish their education or complete it elsewhere. Corinthian has 14 days to respond to the department's letter outlining the fine.

Corinthian, once one of the nation's largest for-profit college operators, has been in the department's sights since last year. After the Education Department restricted Corinthian's access to federal student aid in June, the company agreed to sell off or wind down operations at its schools.

The company sold off the majority of its schools to a nonprofit student loan servicer last November, but its California schools — including Heald — are still owned by the company because of an ongoing lawsuit filed by Atty. Gen. Kamala D. Harris in 2013.

The fine comes when Corinthian has been seeking buyers for its Heald campuses. Last week, Heald's president, Eeva Deshon, issued a press release saying the attorney general's lawsuit was effectively blocking the sale.

Part of the lawsuit includes an injunction that requires buyers to assume potential legal liability at the school.

College Central
China-funded centers seen by colleges as a way to improve ties, but Trump fears they harbor spies
1,078 views

College Central
The Student Debt Problem Is Worse Than We Imagined
1,556 views