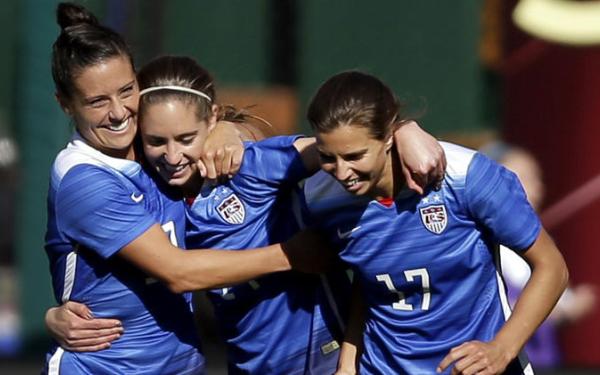 United States' Morgan Brian, center, is congratulated by teammates Ali Krieger, left, and Tobin Heath, after scoring during the second half of an exhibition soccer match vs. New Zealand on April 4.
(Credit: Jeff Roberson / AP)

The U.S. will enter the women's World Cup in Canada this year with what is likely to be the most experienced major tournament team in soccer history after Coach Jill Ellis settled Tuesday on a 23-woman roster that has combined for more than 2,300 international appearances.

However, the team may also be the oldest of all time: If the U.S. makes it to Cup final on July 5, 10 American players will be at least 30 years of age while one, defender Christie Rampone, will be 40. And that could be an issue because this World Cup will be the most physically demanding ever, with an expanded field that will require the two finalists to play a record seven games in less than a month, all of them on artificial turf.

So Ellis also has included seven women who will be younger than 27 when the tournament starts and eight who have never gone to a World Cup.

"Any player on that roster, I would feel confident in being able to step into a starting role because in effect they have done it," she said.

"We've got . . . younger players that have earned starting roles. And the important thing with them is they've gotten experience. So I actually think it's a really good balance. And how we're going to utilize players is part of the strategy going into this World Cup."

Still, depth and experience will be the U.S. team's strengths in Canada, something Ellis said became apparent to her during a recent scrimmage.

"I looked at the team that wasn't the starting team at that point and you've got Olympic gold medalists, you've got World Cup players. We are very, very deep," she said. "Just having players that you know what they've done in big moments, that's part of it. It's the pressure of going into that cooker that I feel confident about with the players that we have."

Rampone, who will be playing in her fifth World Cup, is the only player remaining from the last U.S. team to win this tournament in 1999. But forward Abby Wambach, with 18 appearances, has actually played in one more World Cup game than Rampone while scoring a national-record 13 goals.

Wambach's 178 scores in all competition are the most by any player, male or female, in international soccer history.