NASA's journey to Pluto: Here's what might go wrong 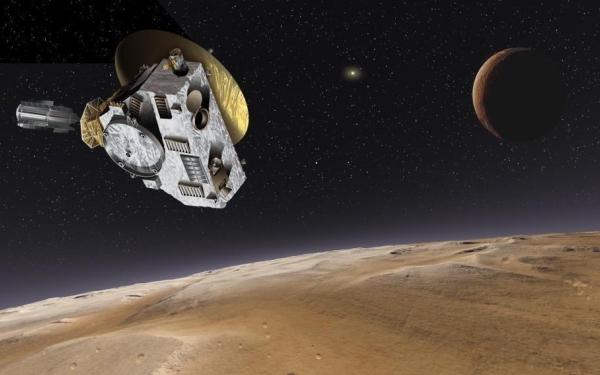 After a journey of 9.5 years across 3 billion miles of space, NASA's New Horizons spacecraft is about three months away from its closest approach to the dwarf planet Pluto.

The mission has gone according to plan so far, but NASA officials said hazards could emerge as the spacecraft plunges deeper into the Pluto system.

"This is no simple flyby," Jim Green, director of planetary science at NASA said during a panel discussion in Washington "We are flying into the unknown."

When the New Horizons mission got the green light in 2001, astronomers only knew about Pluto's largest moon Charon, which is about the size of Texas. Since then, four more moons of Pluto have been discovered -- Hydra, Nix, Styx, and Kerberos.

There may even be more than that. Alan Stern, principal investigator for the New Horizons mission, said it is possible that there are other satellites around Pluto that are too small to be seen by telescopes in and around Earth.

The New Horizons team is not worried about the spacecraft crashing into one of Pluto's moons. That's very unlikely. Slightly less unlikely, however, is the chance that the spacecraft could get hit by leftover debris from a collision between one of the moons and another object.

Stern explained that the Pluto system is hurtling through the collection of icy bodies called the Kuiper Belt at the speed of the bullet. If Pluto and Charon got hit by one of those objects, their gravity would trap the ejecta from the collision, causing it to settle back to the surface.

But it's a different story for the smaller moons. They do not have enough gravity to keep the ejecta from an impact from floating off into space. Stern said it is likely that moon dust eventually gets captured into orbit around Pluto, perhaps leading to the formation of rings around the dwarf planet.

If Pluto does have rings, it would be an exciting discovery but it could also pose a hazard to the mission.

"Even tiny particles the size of a grain of rice can be lethal to the New Horizons spacecraft because we are traveling so fast," Stern said.

Four years ago, he said, he put together a hazard analysis team to calculate how much danger the spacecraft would face around the time of closest approach.

As it turned out, the answer was "not much."

"As we did more testing of the spacecraft components, our degree of concern declined with time," Stern said.

He added that the best estimates suggest the probability of a debilitating run-in with a bit of moon dust is significantly less than 1%.

However, there are no other spacecraft on their way to Pluto, so this is our one chance for some time to see the dwarf planet up close and nobody wants to take any chances.

During the panel discussion, Stern described a few cautionary measures that have been added to the mission's operation plan to guard against any unfortunate accidents.

They include allotting time to a series of watch campaigns, when controllers will use New Horizons instruments specifically to look for new satellites and rings that could present hazards. The first one is set for May 11, the last for late June.

New Horizon's closest approach to Pluto is scheduled to occur in mid-July.

Stern said the team has also plotted two alternative approach trajectories that might provide less science value but would be safer if dangers become apparent.

"We are taking this very seriously," he said. "[The Mars rover] Curiosity had seven minutes of terror [when it landed]. I like to refer to our approach to Pluto as seven weeks of suspense."