Korean movies to stream on Facebook for the first time; including Friend II for free April 16 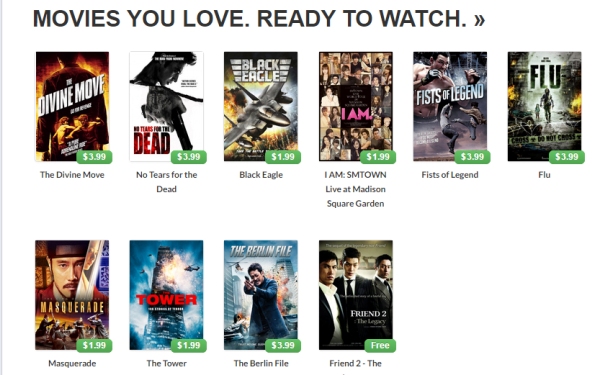 CJ Entertainment, Asia’s premier entertainment company and Korea’s #1 filmmaker and distributor, announced today that they are partnering with Walla, a video-on-demand streaming service app to bring the hottest in Korean movies and television to fans on Facebook. Beginning April 15, fans in the United States can watch movies on demand directly from the CJ Entertainment USA, KCON and Mnet America Facebook pages.

In conjunction with the US theatrical release of #1 youth comedy Twenty, viewers who visit CJ Entertainment USA's Facebook page on April 15-16, can get a double dose of Twenty’s uber-hot star, KIM Woo-bin, for free as he flexes his action chops in Friend II: The Legacy. Other titles available for purchase include: I AM, Black Eagle, FLU, Masquerade, Fists of Legend, The Tower, The Berlin File as well as the latest action hits No Tears for the Dead and The Divine Move. Prices will range from $1.99- $3.99. Korean dramas will be available at a later date.

Walla is a new way for studios to deliver and distribute their content directly to end users through social media. In partnering with Asian entertainment guru CJ Entertainment, Walla showcases its new application and taps into the digitally savvy, fast growing k-pop and k-drama audience.

ABOUT CJ ENTERTAINMENT
Launched in 2005, CJ Entertainment America (CJ Ent.Am) is the U.S. arm of Asia’s premier entertainment company and Korea’s #1 filmmaker and distributor, CJ Entertainment & Media (CJ E&M). Since 1995, CJ E&M has provided original, award-winning content – across an array of genres, including drama, comedy, action, sci-fi/horror and special interest – for theatrical, television, DVD, digital download, interactive game publishing/portals and music. The cornerstone of the Korean entertainment industry – boasting the country’s largest and most significant library, with hundreds of films – CJ E&M is also a singular presence throughout Asia, Europe and in the United States and a key force in popularizing contemporary Korean and Pan-Asian cinema around the world. Top films include Snowpiercer, The Man From Nowhere; The Good, the Bad, the Weird; A Bittersweet Life; Joint Security Area; and the Vengeance trilogy, to name a few. Visit them online at: cj-entertainment.com.