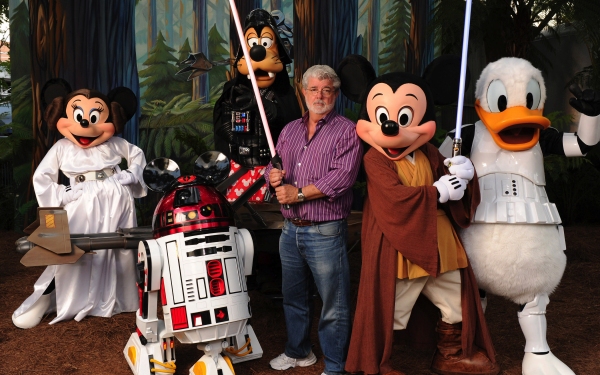 LOS ANGELES — “Star Wars,” the space-opera franchise that revolutionized the movie business and spawned a sprawling multi-billion-dollar multimedia empire, is back with a renewed force.

“Star Wars Episode VII,” the first new “Star Wars” film in a decade, won’t hit theaters until Dec. 18. But the countdown begins in earnest Thursday, when grown men in Stormtrooper costumes, suburban moms dressed as Princess Leia and kids done up as cuddly Ewoks will descend in droves on the Anaheim Convention Center for the Star Wars Celebration fan convention.

It marks a pivotal moment for one of the most lucrative series in film history — and for Walt Disney Co., which paid $4 billion to acquire Lucasfilm and its “Star Wars” franchise from creator George Lucas in 2012.

Disney is counting on “Episode VII” and a string of subsequent “Star Wars” movies to power a host of related revenue streams for years to come, including theme-park tie-ins. The company’s track record of late is almost flawless, but the relaunch is not without its risks.

“The fans of ‘Star Wars’ will put you in your place if you don’t deliver the goods,” said Paul Dergarabedian, senior media analyst at the box office tracking firm Rentrak. “They are the best arbiters of the brand. They can be your mightiest marketing foot soldiers, or they can be your biggest nightmare. A lot is riding on them to get the word out in a positive way.”

The four-day convention in Anaheim offers a chance for Disney to assure fans that the universe that Lucas created — with its blend of futuristic technology, swashbuckling adventure and hero’s-journey mythology straight out of Joseph Campbell — is in good hands.

It kicks off with a panel Thursday morning featuring “Episode VII” director J.J. Abrams and Lucasfilm President Kathleen Kennedy that will offer the clearest glimpse yet of the next chapter in the franchise’s nearly 40-year history.

“This is Disney’s first opportunity to show the core audience for this property what they plan to do with it,” said Eric Geller, a writer for the “Star Wars” news site TheForce.net. “In 20 or 30 years, people will want to be able to say to their kids or their friends that they remember when Disney formally kicked off this next era — and Celebration is really that event.”

For months, the studio has been carefully managing the marketing rollout of the new “Star Wars” film, subtitled, “The Force Awakens,” which will bring together stars from the original trilogy — including Mark Hamill, Harrison Ford and Carrie Fisher — with a new generation of actors, some of whom weren’t even born yet when those films were released.

In November, Disney released a 90-second teaser for the movie that was clearly engineered to tap into nostalgia for the franchise with shots of X-wing Fighters and the Millennium Falcon and sounds of lightsaber swooshes and the strains of composer John Williams’ iconic “Star Wars” score.

During Thursday’s panel, the studio is expected to show a new trailer that will offer a fuller look at the new film, which will kick off a new trilogy and three planned spinoff films over the next several years.

Further stoking the buzz for “Episode VII,” the six previous “Star Wars” films were recently released for the first time on streaming services, such as iTunes, Amazon and Google Play.

Lucasfilm mounted the first Star Wars Celebration in Denver in 1999, just three weeks before the release of “The Phantom Menace,” and has held eight of them since then in the U.S., Europe and Japan.

Over the years the conventions have featured appearances from “Star Wars” cast and crew members along with exclusive merchandise, exhibitions of fan-created art, costume contests and Jedi Training sessions.

This year, with so much excitement around the franchise, planners are expecting 40,000 or more fans to attend, more than any previous convention.

“This is one time we think we could sell out,” said the event’s director, Mary Franklin, who has been working on the conventions since 2001.

For millions of “Star Wars” fans around the world, the next eight months promise a heady blend of anticipation and anxiety unlike anything they’ve known since the 1999 release of the first “Star Wars” prequel, “The Phantom Menace” — a film that grossed $1 billion globally but was largely seen as a creative letdown.

Though some “Star Wars” devotees were initially dismayed by the notion of Disney buying Lucasfilm, the general mood among fans has settled into one of cautious optimism.

“So far I think Disney have been great stewards of ‘Star Wars,’ ” said writer-director Kyle Newman, who made a 2009 comedy about rabid “Star Wars” fans called “Fanboys” and will be attending his seventh Celebration this week. “They’re a character-based company, and ‘Star Wars’ is one of the strongest collections of characters there is, in terms of global recognition. They have a plan to expand it, capitalize on it, reintroduce it to people — and, of course, that’s where everybody’s caution comes in. Because they could make a misstep.”

In Abrams, Disney has a director who previously revived the dormant “Star Trek” franchise for Paramount Pictures. That said, there are always risks for any studio in offering an early peek at its wares, even at an event as friendly as Celebration.

Fans can pounce on any perceived blunder (a brief shot in the “Episode VII” teaser of a lightsaber with a crossguard ignited fierce debate among fans), and negative impressions can be cemented at Internet speed.

For Disney — which has also brought two other pop culture powerhouses, Marvel and Pixar, under its wing in the last decade — a lot is riding on getting the movies right, said Alexia Quadrani, analyst at JPMorgan.

“If you want to develop a Star Wars theme park in the Walt Disney parks, you want a successful movie to drive attendance,” said Quadrani. “If you’re going to sell consumer products, you want to have a successful movie to drive demand for those products. So the success of the film is definitely at the center of the potential benefits to the other businesses in Disney. The proof is obviously in the pudding. But all the indicators that we can see at this early point give us reason to be very optimistic.”

Indeed, with the film industry showing renewed strength at the box office this year, expectations for the box office of “Episode VII” at this point couldn’t be much higher. Released in May 1977, the original “Star Wars” set the template for the kind of mass-appeal, highly merchandized popcorn blockbusters that have now become the backbone of Hollywood.

But for all the comic-book, sci-fi and fantasy franchises that have followed in its wake — with the upcoming sequel “The Avengers: Age of Ultron” being just the latest example — there is still nothing quite like “Star Wars.” “We’re going to have to prepare ourselves for a December opening weekend the likes of which we’ve never seen before,” said Dergarabedian.

“A big opening in December is $75 (million) to $80 million, but I think this movie is going to blow the doors off the records. It’s been almost 40 years and people still get goose bumps when the first bars of that ‘Star Wars’ theme crescendo. Not many movies — or really any popular art — can do that.”

For a hard-core fan like Newman — who has even seen the much-maligned “Phantom Menace” “probably 100 times” — the next eight months may be a painfully long time to wait. But there will be no shortage of “Star Wars” mania to keep him occupied.