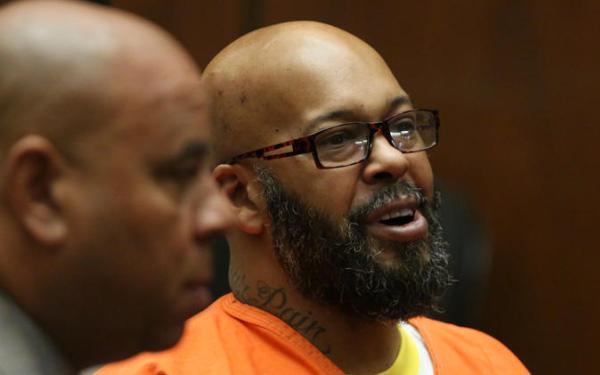 A Los Angeles County judge ruled Thursday that there was enough evidence for former rap mogul Marion “Suge” Knight to stand trial on murder and attempted murder charges for allegedly plowing his truck into two people in a Compton restaurant parking lot earlier this year.

Superior Court Judge Ronald Coen made the ruling at the end of a preliminary hearing in which the surviving alleged victim recanted portions of his statements to investigators implicating Knight and repeatedly claimed not to remember details about the incident.

Shortly after the judge's announcement and after the court session was over, Knight was taken to a hospital for a “medical emergency,” sheriff’s officials said.

Previously, Knight collapsed during a court appearance March 23 and was hospitalized twice in February after court appearances. He has complained of stomach issues and an ongoing complication after being shot multiple times inside a West Hollywood nightclub last year.

As for the murder charge, footage from a security camera shows Knight’s truck running over two men in the restaurant parking lot. His attorney has argued that Knight acted in self-defense, saying his client hit the men while he was trying to drive away after one of them attacked him.

Cle “Bone” Sloan, an actor and filmmaker who describes himself as "a nonactive gang member," testified Monday that he could not recall many of the details surrounding the Jan. 29 incident in which he was run over.

Sloan, 51, was knocked unconscious and suffered serious injuries to his legs and head. A second man, Terry Carter, was killed.

The hearing highlighted what legal experts say is a common occurrence in the justice system: recantations among witnesses, including those who were the victims of violent crimes.

Victims and witnesses -- particularly when gangs are involved -- often fear being labeled as "snitches," concerned that it could lead to retaliation or would violate an unwritten code against cooperating with police, said defense attorney James Cooper, who has represented gang members.

For many, the reluctance to testify extends to cases against rival gang members and often remains even after someone has left a gang, he said.

"They have a creed," Cooper said. "They do not cooperate with the prosecution of a gang member, even if he’s from a rival gang. It’s just a rule: They don’t cooperate."

When a prosecutor asked Sloan in court this week about details he previously provided investigators about an argument with Knight in the hours leading up to the killing, he testified that “it’s all a blur.” He cried on the witness stand when he was confronted with transcripts of an interview he gave sheriff's detectives about the fatal encounter with Knight.

“I don't want it to get misconstrued that I told on this man,” he said, pointing at Knight, who sat quietly in court wearing orange jail scrubs. “I'm no snitch .... I will not be used to send Suge Knight to prison.”

Sloan also did not identify Knight in court.

“Yes, I know Mr. Knight,” Sloan said, glancing at the cofounder of Death Row Records, "but that does not look like Mr. Knight.”

Prosecutors have not filed a gang allegation with the current charges against Knight, but they submitted a document with a bail motion in which a sheriff's homicide sergeant identifies Knight as a Bloods gang member.

Asked on Wednesday why he thought his client had testified to something different from what he told detectives, Sloan’s attorney, Stephen Bernard said, “God, I wish I knew."

Bernard said he thinks everything his client initially told sheriff's detectives is true.

“He marches to his own beat,” the attorney said of Sloan.

Bernard said his client probably believed that surveillance video from Tam's Burgers showing Knight's truck plowing into Sloan and Carter was powerful enough evidence and was upset that he was called to testify in the case.

“He just didn’t want to be known as someone who is working for prosecutors or the police,” Bernard said, “when in his mind there was no need to do this."

Some legal experts said they were not surprised by Sloan's testimony.

“No snitching is big time," said Robert Freeman, a former LAPD officer who testifies as an expert in gang cases.

Prosecutors have worked out a reliable strategy for dealing with witnesses who recant, a problem that is so common that it has become "just part of the fabric of the system," said former Los Angeles County Dist. Atty. Steve Cooley.

Playing audio from recorded statements with investigators that contradict the witness' testimony is often effective, Cooley said, as is having a detective testify about what the witness previously said.

Deputy Dist. Atty. Cynthia Barnes on Monday read from a transcript of Sloan's interview with detectives in which he detailed a confrontation he said he had with Knight before the killing. Barnes also played a recording of the interview in court.