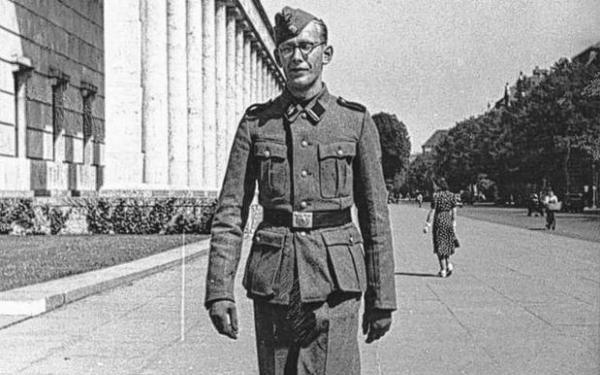 While Oskar Groening admits, to some extent at least, a role in the 300,000 murders with which he's charged, he's 93, in failing health and unlikely to spend much time in prison. Read more here: http
(Credit: HANDOUT)

BERLIN — Nearly 70 years after World War II ended in Europe with Nazi Germany’s surrender on May 7, 1945, what’s likely to be the final criminal chapter of that horrific period is about to unfold in a small German town.

Beginning next Tuesday, Oskar Groening, who’s better known as “the accountant of Auschwitz,” goes on trial for what in any other context would seem an impossible crime: 300,000 counts of accessory to murder.

Innocence is not really an issue, though guilt will be: Groening has freely admitted that he stood on the unloading ramps of the most infamous of the Nazi death camps and counted the cash confiscated from the Hungarian Jews who spilled out of the box cars, headed for selection. What the court will decide is whether that made him an accessory to their murders in Auschwitz’s gas chambers.

But the larger point the trial will make is that decades later, Germany and Germans remain committed to running down perpetrators of the Holocaust, even as they near their natural ends. Groening is 93, sometimes described as in poor health and unlikely to live out much of any sentence handed down, even if he survives the trial, which is expected to stretch over four months.

“Even if someone is physically incapable for reasons of age and health of serving a sentence, moral justice is important, for the victims, but above all to reinforce core societal values,” said Deidre Berger, head of the American Jewish Committee office in Berlin. “It is never too late to hold trials of Nazi perpetrators and accomplices. There can be no statute of limitations on justice for the heinous crime of the Holocaust.”

Groening’s trial is a fitting reminder of “never again” for the murder by Adolf Hitler’s Third Reich of an estimated 6 million Jews and 5 million others — Roma (also known as Gypsies), gays and political opponents. Its start in the city of Lueneburg in northern Germany comes a day after the date Hitler was born 126 years ago.

In the past, Groening has maintained he wasn’t a killer but “a cog in the machine,” and previously German law enforcement had agreed. Prosecutors knew his story when they found him in 1963 but decided not to press charges.

Interpretations of the law have since changed, however, and at least two other people have been charged in similar cases. In addition to counting money, Groening, who was a member of the SS, Hitler’s storm troopers, is accused of hiding luggage so that those aboard later train loads wouldn’t suspect something was amiss.

“But the Groening case is a special one,” said attorney Thomas Walther, who represents Auschwitz survivors and their families. Until now, Groening hasn’t told the full truth of his role at Auschwitz. Once it emerges at trial, Walther said, the full collective guilt of Germany will be on display. “It is obvious that hundreds or maybe thousands of individuals who have similar details for aiding and abetting have not been put on trial,” he said.

Groening’s story: From May 16 to July 11, 1944, he stood on the unloading ramps at Auschwitz as the Nazis’ Final Solution was applied to the Hungarian population. He watched as the healthy and strong were selected to be put to work. And he watched as the very young, the very old, the ill and the weak were moved directly to the gas chambers to be murdered.

Before those in either group met their fate, however, Groening would count any cash they carried and account for any valuables among their belongings, looking for money to support the Third Reich.

A decade ago in a BBC documentary, he claimed he’d done nothing more than “live in a garrison where the destruction of the Jews took place.” But he also noted that in the last decades of his life he was deeply disturbed as it became clear that more and more people around the world were claiming the Holocaust was exaggerated or even fabricated.

“I see it as my task, now at my age, to face up to these things that I experienced and to oppose the Holocaust deniers who claim that Auschwitz never happened,” he said in the documentary. “I want to tell those deniers: I have seen the gas chambers, I have seen the crematoria, I have seen the burning pits — and I want you to believe me that these atrocities happened. I was there.”

Experts agree that the symbolic importance of bringing Groening to trial cannot be overestimated.

Just last month, on March 23, the notorious Danish Nazi Soeren Kam, who’d been convicted in Denmark of the 1943 murder of an anti-Nazi Danish newspaper editor, died of natural causes in Kempten, a Bavarian village in southern Germany. Like Groening, Kam was 93.

But unlike Groening, Kam was “a totally unrepentant Nazi murderer,” in the words of Efraim Zuroff, the director of the Israel office of the Simon Wiesenthal Center, the Nazi hunting organization. That he died a free man in Kempten “is a terrible failure of the Bavarian judicial authorities,” Zuroff said. “Kam should have finished his miserable life in jail, whether in Denmark or Germany. The failure to hold him accountable will only inspire the contemporary heirs of the Nazis to consider following in his footsteps.”

The center keeps a list of most-wanted Nazi war criminals, and Kam was No. 6. Until December, the first name on that list was Alois Brunner, who, despite the fact that he would have been 102, was listed because it wasn’t known whether he was alive or dead. A Wiesenthal Center statement described Brunner as “a key operative of Nazi war criminal Adolf Eichmann … responsible for the deportation of Jewish people from Austria (47,000), Greece (44,000), France (23,500) and Slovakia (14,000) to Nazi death camps during the Holocaust.”

In December, a German intelligence officer was able to confirm that Brunner had died in Syria, apparently of natural causes, in 2010.

German historian Manfred Goertemaker, a professor at Potsdam University who’s spent years studying the German justice system’s approach to former Nazis, said it was essential that Germany kept the hunt going until they were all gone.

“I know many Germans would like to say we’ve done enough,” he said. “But this is incorrect. Such horrible crimes cannot go away easily. There have to be consequences.”

Decades ago, German officials wanted to rely on “the natural end to the issue” and allow those who weren’t at the top of the Nazi chain to move back into society. But today, Goertemaker said, government officials realize that history will judge “how we dealt with our Nazi past.”

“It is important that Germans remember that the people of this nation, in a free and fair election, chose Hitler,” he said. “Hitler was not an exception. He was a reflection of the common will. Others may not have committed such crimes, but they were happy to be led by one who did. That is a lesson we must never forget, and this trial is a part of that lesson.”