New website makes case for UC's worth to state 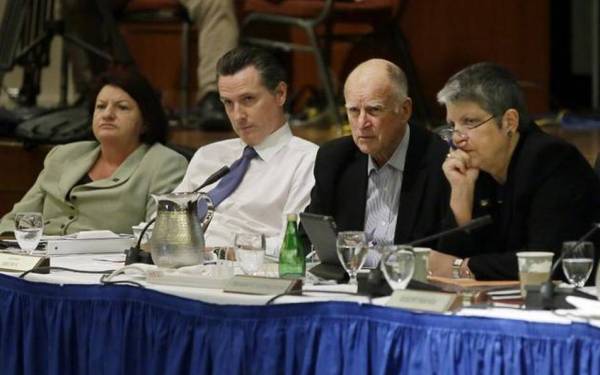 The University of California unveiled a website Thursday intended to answer every data question a UC watcher might want to know: where graduates work, what kind of degrees they got, where applicants come from and how many got in.

The one-stop data site also reinforces a message UC is desperate to convey to state lawmakers, who are about to begin their state budget negotiations in earnest: The university is worth investing in because it’s essential to the California economy.

Not coincidentally, the new online Information Center also breaks the information down by legislative district — including the number of UC employees, alumni, undergraduates and even tech licenses connected to UC that exist within each lawmaker’s constituency.

“That makes the data we have more personal when (lawmakers) know the decisions they make about UC affect these alumni and these employees that live within their district,” said Pamela Brown, UC’s vice president for research and planning, whose group has been developing the site for about a year.

“I strongly believe that when we share the information that we have, it reinforces the message that investing in UC is one of the biggest bangs for your buck,” Brown said.

It’s an argument that UC advocates and campus leaders have been making since the fall, when Gov. Jerry Brown gave the first indication that his proposed state budget for the 2015-16 fiscal year would not include the financial boost UC President Janet Napolitano said was needed.

The regents braced themselves by raising tuition by up to 28 percent over five years, beginning with a 5 percent increase, to $12,804, for fall. Napolitano is asking the state to buy out the tuition hikes by adding $220 million to UC’s nearly $3 billion state allocation. Brown is offering $120 million — but only if UC keeps tuition flat.

Napolitano responded in March by capping enrollment at current levels.

All the while, UC has urged lawmakers to consider how its graduates and research bolster California’s economy. A look at the new Information Center tells the story.

“About 70 percent of the most recent graduating cohort were found working in California after two years,” according to the section titled “UC undergraduate alumni outcomes.” It also reveals what fields they work in and how long it takes graduates to double their earnings.

The constant concern of students, parents and politicians is whether UC is affordable. Giving the price in constant 2012 dollars, the site shows the total annual cost of attending UC — including tuition, room, board and books — rose 30 percent between 2004 and 2014, from $23,300 to $30,300.

Lest anyone think that’s overly expensive, the site shows that the average annual cost for low-income students after financial aid is just $10,000. It also shows that student debt is higher outside of UC. At other other public universities, for example, it averages about $26,000, compared with less than $20,000 for UC graduates.

Charles Schwartz, a retired UC Berkeley physics professor who has become a watchdog of UC data and spending, said some of the numbers can be misleading. For example, he said one table shows annual expenditures for instruction have risen greatly over the past decade.

“You can be seriously misinformed if you don't know that most of that increase has to do with clinical practice in the medical schools and has nothing at all to do with undergraduate education,” he said.

But will the overall information be enough to persuade lawmakers to allocate the money UC says it needs?

“I don’t think this is sufficient,” Baker said. “They don’t need to make the case for how valuable they are to Californians. The case UC needs to make to us is how well and wise they’re spending the money they receive from students and taxpayers.”