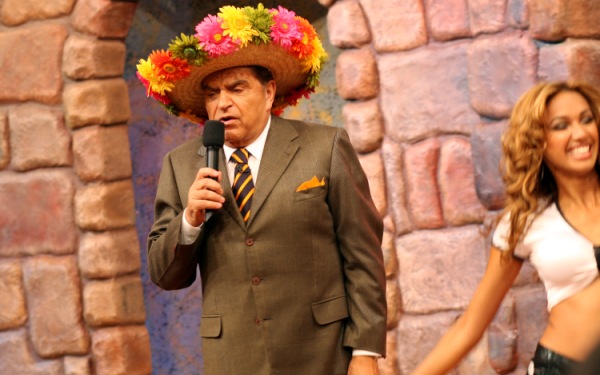 LOS ANGELES — The days of oddball sketches, leggy models and impressing El Chacal are about to bid adios: Long-running Spanish-language TV staple “Sábado Gigante” will end its run after 53 years on the air.

Univision is turning out the lights on its top-rated variety show.

The campy show, which has aired for 3,000 Saturday nights without interruption, features Chilean ringleader Mario Kreutzberger, better known as Don Francisco. He is known for going from wearing silly hats during madcap contests to earnestly interviewing first lady Michelle Obama.

While the show is scheduled to run its final episode Sept. 19, Kreutzberger isn’t quite ready to hang it up.

The 74-year-old showman will host entertainment specials on Univision and help develop future projects for the network. He will continue to host “TeletonUSA,” a telethon that is held every year to raise money for disabled children.

“Oh my God,” said Rosie Vasquez, 71, when told by a Los Angeles Times reporter that the show was ending its long run.

“What will I do without Don Francisco?” Vasquez asked. “This world is going under.”

The show airs in more than 40 countries and boasts tens of millions of weekly viewers, including about 2 million in the United States, most of them in Miami, New York and Los Angeles.

However, in some ways, the show elicits the feel of a bygone era.

Younger audiences have thinned in recent years. Latinos under the age of 35 seemed less enchanted with Kreutzberger and his campy humor than their immigrant grandparents.

Retiring the show became a delicate task for Univision. Executives wanted to plan a graceful exit for “Sabado Gigante” because the show has been such an important part of the history of Univision — as well as Spanish-language television in the U.S.

Behind the scenes, Univision executives have long discussed how they should refresh the show — perhaps by bringing in a younger host. But Kreutzberger was a tireless workhorse who owns the show and its format.

So dedicated, he would bring his lunch to Univision’s studio in west Miami in a little lunchbox.

Kreutzberger also wanted his daughter, Vivi Kreutzberger, to take over once he retired to carry on the family business, according to a knowledgeable person who was not authorized to discuss the topic.

A few years ago, soon after the show’s 50th anniversary celebration, Univision executives began planning for the show’s retirement. Kreutzberger was asked when he wanted to end his long run, and he decided that 2015 would be a good time, according to another person familiar with the situation.

Kreutzberger wanted to go out while the show was still on top of the ratings, this person said.

The date also coincides with a planned public offering for stock in Univision Communications. The show, while profitable for Univision, is a costly endeavor because of its large production staff in Miami.

Ending the show will allow Univision to trim its programming costs while the company recruits investors.

But for many Latinos — Spanish-speaking or not — Don Francisco and “Sábado Gigante” have long been a form of entertainment comfort food. And how could they not be?

Most Latinos can’t remember a time when the show hasn’t been on the air.

Alberto Ciurana, president of programming and content for Univision, lauded the way in which the program has established itself as a veritable family member.

“For so many in the Spanish-speaking community, Don Francisco’s weekly three-hour show defines Saturday evening entertainment, and I want to thank him and the incredible team for their outstanding work,” Ciurana said in a statement released Friday.

Non-Latino Americans are just as aware of the show’s “institution” status — it has been spoofed by Stephen Colbert on “The Colbert Report.”

“Sábado Gigante” had its origins in 1962, when Kreutzberger launched a loud and flamboyant program on Sundays called “Show Dominical” in his native Chile. It soon gained traction and moved to Saturday nights with a name change. It eventually landed at Univision in 1986.

In a statement, Kreutzberger thanked the network and the show’s dedicated fans.

“From the start we made sure to ask, ‘What does the audience want?!’ And we have worked tirelessly for precisely that audience, with the utmost dedication, humility and deep respect,” he said.

He continued: “To all those who joined us by tuning in to ‘Sábado Gigante’ with their constructive criticism, work and loyalty, I would like to say from the bottom of my heart and in capital letters, THANK YOU VERY MUCH.”