California Incline in Santa Monica to close Monday for reconstruction 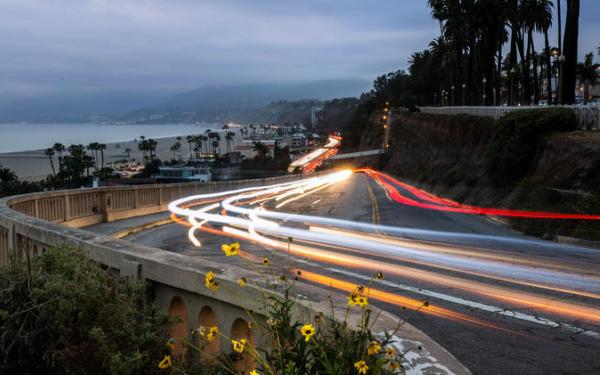 In March, the light trails of vehicles are shown moving up and down the California Incline in Santa Monica. Reconstruction of the deteriorating roadway is to start Monday.
(Credit: Marcus Yam / Los Angeles Times)

Westside traffic, already the stuff of legends, is expected to worsen dramatically with the closing Monday of the California Incline in Santa Monica for a complete reconstruction designed to keep the structure from collapsing in an earthquake.

As part of a $20-million project, workers will begin demolishing the severely deteriorated road, technically a bridge, in anticipation of rebuilding it. The link, which descends from Ocean Avenue to Pacific Coast Highway, connecting the bluffs with the beach, is used by 15,000 vehicles daily.

Pacific Palisades and Malibu residents, in particular, anticipate that motorists will jam local canyon roads as they seek to shave minutes off disrupted commutes.

An environmental impact report prepared for the long-overdue project predicted that the close of the incline for as long as 13 months will cause "saturation" levels of traffic in Santa Monica Canyon.

Drivers who typically take the incline to go north on Pacific Coast Highway will be advised to head south on Lincoln Boulevard to the 10 Freeway and then merge onto northbound PCH at the McClure Tunnel.

Motorists heading south on PCH will be directed to go past the incline to the recently refurbished Moomat Ahiko Way to reach downtown Santa Monica or to exit the 10 at Lincoln Boulevard for points farther east.

Built in the 1930s, the incline falls well shy of meeting current seismic standards. Portions of the bluffs have given way, and crumbling concrete and exposed rebar are evident.

The new bridge will be 52 feet wide, 5 1/2 feet wider than the existing structure. It will feature a wider sidewalk and bicycle lanes.

MCM Construction Inc., the contractor, has been authorized to work from 7 a.m. to 10 p.m. Mondays through Fridays and from 7 a.m. to 9 p.m. on Saturdays. Caltrans will allow MCM to close one northbound lane of PCH from 9 a.m. to 1 p.m. and from 7 p.m. to 10 p.m. between Labor Day and Memorial Day. No PCH lane closures will be allowed during the summer.

Local News
LA County’s new coronavirus surge: How bad will it get?
609 views

Local News
L.A. is home to heavy industry— and more federal deals not to prosecute polluters than anywhere else
1,293 views
bid=||