Catherine Keener: After Capote and The 40-Year-Old Virgin, the Actress Strikes Again 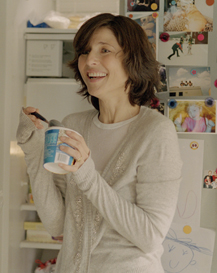 The past couple of years have been heady ones for Catherine Keener to say the least. This Spring, the two-time Academy Award nominee (for Being John Malkovich and Capote) returns to theaters in the dramedy Friends with Money, which boasts an eclectic cast of talent portraying people we either all know or sometimes are, in the very least.

Directed by Keener’s close friend Nicole Holofcener (Lovely and Amazing), the new flick delves into the tricky waters of how, once we become adults, the influence of money permeates most of our life’s decisions; and why we sometimes end up taking pathways previously unforeseen.

One might consider the latter a metaphor for Keener’s ongoing relationship with Holofcener over the years and, according to the actress, working with the writer/director has become easier. “I understand what [Nicole’s intentions with] the dialogue is,” she states. “ I have more of an ear for the dialogue; what she means more so than, say, when I first read Charlie Kaufman’s script [for Being John Malkovich]. And now that I know him, I read his scripts differently too.”

Friends follows the lives of four women: Olivia, Christine, Franny and Jane. While Jane (Frances McDormand) has a thriving clothing design business and Franny (Joan Cusack) is independently wealthy, not everyone in their little circle has scads of loose cash lying around. Olivia (Jennifer Aniston), for instance, is a thirty-something ex-grade school teacher turned freelance maid who’s just been dumped by a married man that she’s obsessed with.

Christine (Keener) has a screenwriting gig with her husband (Jason Isaacs) and most of their free income is being redirected to adding a new floor to their West Los Angeles home, which forces them to come to terms with the fact that both their marriage and creative partnership is falling apart.

Kudos from art house fans and Academy nominations notwithstanding, it’s safe to say that Keener’s indie credentials and a willingness to go all the way to the proverbial “there” with her choices in roles have resulted in a unique body of work. One would be hard-pressed to find an actress who could convincingly pull off the cold-as-a-glacier nonchalance of Maxine in Malkovich and turn around to nail the loveable, big hearted “hot grandma” Trish in last year’s 40-Year-Old Virgin.

“I feel like I really had a lucky streak,” she reflects when asked how the recent roller coaster ride of recognition feels. “I don’t know how to respond to that without seeming like an idiot. I mean that. It’s just awesome,” she exclaims. “I haven’t had a chance to remember it yet. I’m still sort of calming down, it’s a very charged time.”

It’s easy to see, when meeting Keener in person that she loves to laugh-and comparisons to Trish wouldn’t be far from one’s mind. Christine in Friends, on the other hand, has issues that are more profound than closing the deal on a booty call before the kids get home. The premise of Friends deals with darker, more emotional themes and accentuates the fact that living in L.A. is not all sunshine and palm fronds and not all endings are happy ones.

“I love Los Angeles – it’s just that our lifestyles are or can be so cliché. That pursuit, that those women revealed themselves to be so much more. They really are well-meaning and true people [who] can be a little self-obsessed and all that but still be good and still deserve love and still want friends and still have loyalty and still have moments of enlightenment. Regardless of how un-sustained they are,” she says.

Having met her husband on a movie set and having worked with Holofcener multiple times, Keener feels no compunction about mixing her personal life with her profession. “I think it’s so fun to work with someone that you’re really close to,” says Keener. “[It’s] some great thing that you go through together. And it can so intensify the relationship. You know, memories become that way because they’re shared. I really love working with people that I’m close to.”

Friends With Money is currently in select theaters.
Article posted on 4/10/2006
This article has been viewed 10878 times.