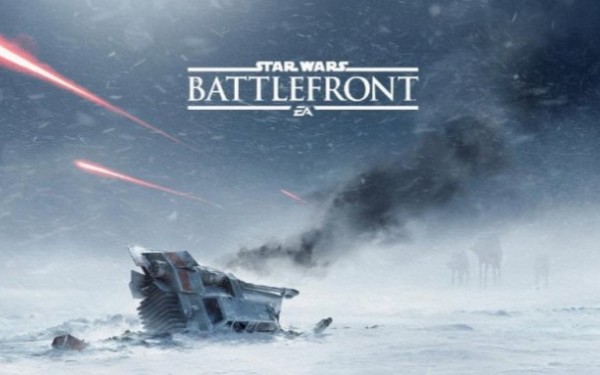 “Star Wars” fans received a glimpse of the next cinematic episode in the fantasy saga. By the next day, it was already time to learn how to play in it.

“Star Wars: Battlefront” took center stage Friday at the four-day Star Wars Celebration fan expo in Anaheim. The game, the first under a 10-year pact between Lucasfilm and Electronic Arts, is due Nov. 17, about a month in advance of the J.J. Abrams-directed “Star Wars: The Force Awakens.” Early glimpses of the game reveal it to be a sort of blaster-heavy “Star Wars” greatest hits collection.

Want to play with lightsabers? Those are here. Want to shoot a blaster like Han Solo? You can do that. Want to pilot an X-Wing? Of course that’s a possibility. Want to play as Darth Vader on Endor, the planet in which his mask was last seen being lit aflame in “Return of the Jedi”? Go ahead, rewrite “Star Wars” history.

“The ambition of the game is to enable the player to immerse themselves in their ‘Star Wars’ battle fantasies,” said Sigurlina Ingvarsdottir, a senior producer on the title.

“Star Wars: Battlefront” is being developed by Electronic Arts’ Stockholm-based studio Dice, known best for its work on the gun-focused multiplayer franchise “Battlefield,” and will be released for the PlayStation 4, Xbox One and PCs.

The game will be closely watched, as it’s the first major console and PC release since Disney dismantled famed video game studio LucasArts, the company that published earlier iterations of the “Battlefront” series. Disney shifted the video game focus from one that was done in-house to a licensing-based model.

“When we entered into this partnership we made a conscious decision that we wanted to give Dice and the other teams at EA unprecedented access to the franchise, the materials and our teams,” said Lucasfilm’s director of business development, Douglas Reilly.

Footage of the game previewed in Electronic Arts’ booth at Star Wars Celebration began peacefully enough, with a digital recreation of the Redwood Forest-inspired world of Endor. But the serene setting of lush greenery and colorful butterflies wasn’t to last, as soon Stormtroopers were glimpsed soaring by on the speeder bikes made famous by “Return of the Jedi.” Blaster fire ensued, with rebel fighters boasting jetpacks and shots having the ability to knock a Stormtrooper’s helmet loose.

Scenes quickly got even more chaotic. Giant robotic Imperial Walkers descended upon the firefight, back-up was called for and Darth Vader was seen emerging from what first appeared to be a safe rebel base. Well, he was heard first, and then a rebel fighter was shown being lifted into the air and strangled by invisible hands.

To create the game, Dice teams visited with Lucasfilm and then went on a scouting tour of the original film locations. By using multiple cameras to capture images of props from the original trilogy, the game was able to create photo-realistic renditions of famed “Star Wars” costumes.

But before any of that took place, the team at Dice began playing with action figures. Dice’s design director, Niklas Fegraeus, said developers wanted to re-create the sensation of being children, capturing the playful imagination that was involved when toying with “Star Wars” meant smashing tiny plastic lightsabers together.

So by the time the group visited Lucasfilm and began photographing “Star Wars” costumes and ships, it was “like being handed the Mona Lisa,” said Fegraeus. But it also inspired the team to take some creative liberties, wanting the game to tap into all the sort adolescent fantasies not seen in the films.

“When you race a speeder bike through the forest of Endor, you immediately think of ‘Return of the Jedi.’ You know, Luke and Leia, chasing the scouts. Now, in ‘Star Wars: Battlefront,’ you can hop in as Boba Fett on Hoth or you can explore the previously unexplored planet of Sullust, things that previously you could only imagine,” Fegraeus said.

The game, which was not playable at Celebration, remains, like the original LucasArts renditions of “Battlefront,” focused on multiplayer. By nature of the game being “Star Wars,” however, it’s likely to generate fan interest among those who aren’t dedicated online players. This was apparent by simply walking around Celebration with a media badge that advertised “Battlefront,” as multiple attendees stopped me to inquire about the game.

Dice’s Ingvarsdottir acknowledged that the title must also appeal to less experienced gamers to be considered a success. To that end, she highlighted “Battlefront’s” single-player missions, which are essentially one-off battles that seek to re-create famed sequences from the original trilogy. They can be played alone or with a friend via split screen or online. The game is taking a vignette approach rather than building an extended single-player narrative.

“Battlefront is traditionally a multiplayer franchise and Dice is specifically well-known as a multiplayer developer, so as we designed the game going forward we decided to have it have a predominantly multiplayer focus,” she said, noting that matches can accommodate up to 40 players. “If you aren’t already an online multiplayer, but if you find this universe appealing and this game appealing, we want to have a way to bring you into it.”

Though the game is primarily focused on the original trilogy that began in 1977, one in-game mission will be tied specifically to the Abrams-helmed “Star Wars: The Force Awakens.” In the trailer released Thursday, fans saw a war-torn desert planet known as Jakku. “Star Wars: Battlefront” will contain a free online addition issued closer to the film’s Dec. 18 release date that will center on the battle that led to the planet’s scarred landscape.

Though the “Battlefront” games were popular and have their share of champions, Ingvarsdottir said the company wasn’t beholden to history.

“We respect the legacy of ‘Battlefront,’ and we are creating something that’s uniquely our own,” she said. “Lucasfilm gave us that mandate: ‘Bring forth the concept of the game that you want to make.’ So this is the game that us, as game makers, based on how we see the franchise and players, is the game we want to make.”