Most humpback whales could be removed from endangered species list 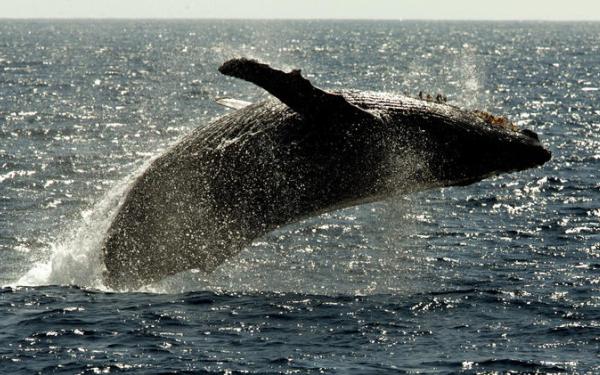 A humpback whale leaps out of the water in what is called breaching.
(Credit: Reed Saxon / Associated Press)

Most of the world's humpback whales could soon be removed from the endangered species list under a new plan from the National Oceanic and Atmospheric Administration, the agency announced on Monday.

Citing improved conservation efforts and population increases noted in a 2010 study, NOAA proposed splitting the world's humpback whale population into 14 distinct sections, and is expected to remove 12 of those population segments from the endangered list, the agency said in a statement.

Two of the 12 population segments that would be removed from both the endangered and threatened species lists generally travel near California, the agency said.

“As we learn more about the species -- and realize the populations are largely independent of each other -- managing them separately allows us to focus protection on the animals that need it the most," Eileen Sobech, assistant administrator for NOAA Fisheries, said in a statement.

Some humpbacks generally migrate along the West Coast between December and April, traversing a near 4,000-mile journey from Alaska to Hawaii. Another population segment that can typically be found along the coast spends the winter months near Central America and Mexico before returning to the California coast.

Aside from commercial whaling, which first caused the species to be placed on the endangered list in the 1970s, humpbacks have also seen their population dwindle due to ship strikes and entanglement in equipment from fisheries, according to NOAA.