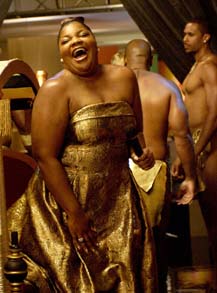 Sitting down with actress/comedienne Mo’Nique is like talking with your older sister, who is doling out funny and honest advice – and you walk away feeling a hundred times better than when you walked in. Meeting with Mo’Nique is definitely a welcomed experience, and it’s nice to know that a lot has happened for the feisty star since she appeared as flight attendant Jamiqua in the 2004 film Soul Plane.

In the last two years, Mo’Nique got engaged to her high school sweetheart, Sidney Hicks, who she describes as “chocolate gold”; she gave birth to twin boys; started a show celebrating thick girl’s curves; launched her Web site, onemonique.com; and, most recently, executive produced and starred in the comedy Phat Girlz.

First-time director and writer Nnegest Likké wrote the script for Girlz with the actress in mind. Mo’Nique admits to having read the script in the bathtub and immediately falling in love with its plus-size aspiring fashion designer, Jazmin Biltmore, who ends up finding love in the form of gorgeous doctor Tunde (played by Haitian actor Jimmy Jean-Louie). Unlike formulaic stories where the fat girl is left behind and offers her thin friend emotional support, Jazmin is an in-your-face, assertive woman who doesn’t hold back.

As a one-woman campaign for her full-bodied sisters, Mo’Nique understands intimately what Jazmin goes through. She whole-heartedly believed that Likké, who’s also voluptuous, eloquently captured the situation on what fat girls go through perfectly.

According to Mo’Nique, the movie’s message is a simple one: Love the skin you’re in. It’s a simple piece of advice that many people find difficult to accept, but that’s what it is. If you love yourself, others won’t have a choice but to dig you. Mo’Nique breaks down how today’s “liposuction-botox-injected-no-carb-eating” world treats thick girls like they’re invisible. This dangerous way of thinking must change before acceptance can kick in.

“We live in such a society where you hate you so much, that you want to make me hate me so you have nothing nice to say to me,” says the Maryland native. “So I’m hoping that when people walk away from the movie – fat girls, skinny girls, white girls, black girls, black men, white men – will all walk away with a little kindness in our hearts.”

She credits her father especially for repeatedly saying that she’s the prettiest girl in the world. Her home life provided an accepting environment where having a big stomach wasn’t a bad thing. While Mo’Nique admits to having other issues that all women go through, being a big girl was never one of them.

Her star continues to rise with upcoming film roles in Beerfest and the voice of a penguin in Farce of the Penguins, directed by comedian Bob Saget, which lampoons last year’s documentary March of the Penguins. Returning to her television roots, Mo’Nique is also attached to a pilot tentatively called “Mo’s House,” about a working mother living in Maryland.

Mo’Nique never gets tired of being the poster girl for curvaceous women. You see it in her 2003 book, Skinny Women Are Evil: Notes of a Big Girl in a Small-Minded World. Overall, you can’t help but notice her infectious enthusiasm on her show “Mo’Nique’s Fat Chance,” on the Oxygen channel, which celebrates big girls and returns on July 15. Whether she’s playing Jamiqua or the self-confident Peaches in the movie Hair Show, Mo’Nique always exemplifies the big, beautiful girl and will continue to do so no matter how many times it’s emphasized.

Phat Girlz is currently in theaters.