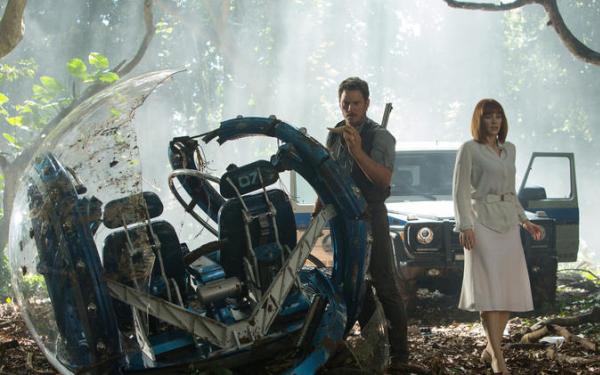 Jurassic World is among an unusually strong slate of movies from bankable franchises scheduled to hit theaters this year. Pictured, Chris Pratt and Bryce Dallas Howard in a scene from the film.
(Credit: Chuck Zlotnick, Universal Pictures and Amblin Entertainment)

Thousands of theater owners and studio executives are gathering this week amid rising expectations that the motion picture industry is poised to hit the jackpot.

Many in the industry fretted about the state of the cinema business as last summer's ticket sales plunged to the lowest level in nearly two decades thanks to a lack of breakout hits. But the mood is now far more bullish in the conventional halls of Caesars Palace, where the National Ass. of Theatre Owners is holding its fifth annual CinemaCon trade show.

Fueled by such hits as "Furious 7" and "Fifty Shades of Grey," and a string of upcoming franchise movies, some analysts predict that ticket sales in the U.S. and Canada will climb 8% to $11.2 billion this year, a new high water mark for domestic box office revenue.

Several reasons account for turnaround. It's a product driven business and this year there's an unusually strong slate of films from bankable franchises such as "Avengers," "Jurassic Park," "Minions," and "Star Wars."

"I've been in the industry a long time, but I don't know that I've ever seen such a strong lineup and spread as we have this year," said Tim Warner, chief executive of Cinemark, the nation's third largest theater chain. "People are real optimistic, not only about the quality of the productions, but the variety of the productions and the way they are spread throughout the year."

Studios are doing a better job of spacing the release of films, showing them throughout the year rather than clustering them mainly in the summer and winter months when there is more competition for viewers.

Additionally, many of the top grossing titles this year are big action movies that will be released in 3D and Imax formats. Such films make more money for studios and theaters, who split box office revenue, because of higher ticket premiums they command.

"Success is never more sweet than in the wake of a year when there wasn't a lot of it," said Paul Dergarabedian, a senior media analyst for Rentrak. "Last year, it was, 'oh my God the sky is falling.'"

At the current pace, global ticket sales could top $40 billion this year, setting a new a milestone, analysts say.

CinemaCon will have a record attendance this year, with some 3,000 registered delegates, up 7% from last year, said Mitch Neuhauser, managing director of CinemaCon.

Underscoring the industry's global growth, 900 of the 3,000 delegates are from international markets representing 72 countries, including Qatar, South Korea, Finland, Kazakhstan, Cambodia and Bangladesh.

China -- which is now the world's second largest film market and has a booming cinema industry -- has 40 delegates at the convention, Neuhauser said. China and other international markets fueled a record level of global ticket sales, which reached $36.4 billion in 2014, according to a recent report by the Motion Picture Assn. of America.

"It's the highest level of international participation that we've had," Neuhauser said. "Our industry just continues to grow and grow."

To be sure, the industry faces some long-term challenges. The number of tickets sold in the U.S. and Canada dropped 6% last year, reflecting a steady drop in the number of younger patrons as theaters face increased competition from Netflix and other entertainment options in the home.

To make up for the drop in admissions, major circuits have been squeezing more money out of existing customers by offering premium services, such as new digital sound systems, plush seating and more elaborate food and beverage services.

Though billed as an event where theater owners and studios can celebrate their industry, CinemaCon has often served to highlight their differences.

Disputes between theater owners and studios have erupted in previous years over such issues as how to divvy up box office revenue and how soon movies are released into the home.

Sony's decision last year to stream the controversial movie "The Interview" before its original Christmas Day release angered several theater owners who refused to play the movie, contending it would undermine the traditional theatrical window that has given them exclusive access to movies.

Tensions also have flared up recently within the exhibition industry. The Department of Justice has been probing claims from independent theaters that the nation's largest theater chains are violating anti-trust laws by preventing them from getting first run movies.

Such disputes, however, aren't likely to get much airing during the four-day trade show, where studios will showcase upcoming films and their stars.

Two years ago, "Spy" director Paul Feig showed his last comedy -- "The Heat," starring McCarthy and Sandra Bullock -- to exhibitors, a screening he feels made a "huge difference" in the movie's success at the box office.

"That's why we're doing the same thing with 'Spy,' because it gets everyone excited about the movie which in turn gives us better placement with posters and displays," said the filmmaker, who is also set to emcee a special dinner for 20th Century Fox Chairman Jim Gianopulos on Wednesday. "We want comedy to be a group experience, and exhibitors are the ones who bring that audience together."

This year, Paramount Pictures is hoping to generate excitement about its "Terminator: Genisys" reboot by bringing franchise star and former California Gov. Arnold Schwarzenegger onto the stage at Caesars' Colosseum.

Paramount's presentation Tuesday will also include footage from what is certain to be one of the summer's biggest blockbusters -- the fifth installment of "Mission: Impossible." It remains to be seen, however, whether Tom Cruise will be a surprise guest.

Other major titles being spotlighted at CinemaCon include Fox's "Fantastic Four" reboot, starring the up-and-comers Miles Teller, Michael B. Jordan, Kate Mara and Jamie Bell; Warner's "Mad Max: Fury Road," the first film in George Miller's series in more than three decades; and Disney's "Inside Out," which the studio is hoping will become its next Pixar Animation franchise.