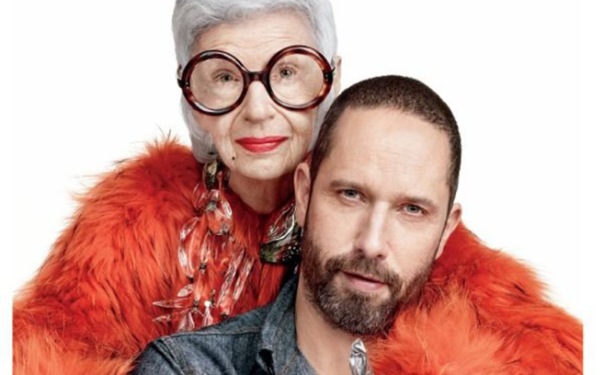 From age 8, jewelry designer Alexis Bittar sold on the streets of New York. First, flowers, then antique trinkets, vintage clothing and, finally, his own jewelry.

Today, first lady Michelle Obama wears his work, and his signature hand-sculpted Lucite pieces as well as his Elements line are sold in 52 countries around the world, 15 of his own stores in the U.S., and every major specialty store. More are on the way, including two outlet stores (pieces will be produced specifically for those).

He visited a downtown Nordstrom recently to meet with his fans, who are as varied as the muses in his spring advertising campaign: 93-year-old Iris Apfel and 19-year-old Tavi Gevinson. Here’s an edited transcript of our phone chat.

Q: How did you decide to feature Iris Apfel and Tavi Gevinson in your spring campaign?

A: I like celebrating women who are independent thinkers and nonconformists. I’ve used a variety of women throughout my advertising and have definitely worked hard in terms of fighting ageism. I used Joan Collins and then Lauren Hutton, and then Jennifer Saunders and Joanna Lumley (British stars of “Absolutely Fabulous”). And I was really on a mission to show women who were mature, partly because that’s who’s actually buying the product, but also to celebrate women who are mature rather than an 18-year-old girl, and then you retouch the 18-year-old girl’s photos. Last year I used Ines Rau, a model who’s transgender, and I didn’t make a big hoopla, but I was proud to use her.

This year, I liked the idea of showing the span of strength. Tavi, who’s 19 and incredibly bright and a visionary, who saw the potential of blogging when she was 11 years old, and then Iris, a dear friend of mine who’s secretly been (mad) that I’ve never used her and is 93. (Iris will be the godmother of one of Bittar’s twins, due any day now). People of all ages really respond to her. I think the reason is, younger and older women look at her as someone who says ... I’m not going to fit into your mold. She’s incredibly outspoken, it’s not just that she dresses up. Both of them, what’s in their brain, you want to hear more.

Q: What did you do for “The Hunger Games” movies?

A: For some reason the sci-fi movies love me. I just did “Star Trek,” too. I think the sci-fi movies love the Lucite, they see it as futuristic, and it just reflects light so well on screen. For “Hunger Games,” we designed a bunch of jewelry for Elizabeth Banks’ character; the clothing was kind of depression-industrial, but the jewelry was completely over the top. She was wearing this gray-tone attire, and then the jewelry was supercolorful, massive bracelets, pins, she wore a ton of jewelry of mine. We designed a collar, a shirt collar out of metal and then a Lucite tie for Peeta. It’s hand-sculpted and has this kind of Deco ice-cracking motif on the tie. The collar looks like clothing, we shaped the metal to look like a shirt collar, and there’s a powder coating on it, where it looks like leather. I was pretty proud of that one.

A: I designed two lines, Elements and Lucite, from the beginning. Elements is completely different, much softer and feminine and more stone and more naturally grounded. Lucite is futuristic, and I liked the material; I used what was done with Bakelite in the ’30s, where they hand sculpted it. Because Lucite is clear, I like the idea of treating the material as an art medium that can be sculpted to anything you want. We don’t use molds. People are always dumbfounded by that. The smallest earring or bracelet, everything is cut from a sheet and sculpted.

Q: Can you give me some sense of how your brand and business have grown?

A: I was working out of my apartment and selling on the street for 15 years, starting in 1982 when I was 13 selling vintage jewelry and then vintage clothes on St. Mark’s in the East Village. There were no vintage stores then. Then on Prince and Green for six years, when I first started designing Lucite and Elements. Now, we have like 400 employees. I was 22, a total dropout, and now I’m a proud dropout. My parents finally forgave me. I completed high school, barely. I went to one college class.

Q: Do you have a favorite piece from your spring collection?

A: There’s a bracelet that’s really kind of liquid feeling, a large cuff. And, I also love the large pin with moving petals, it has a hand-painted, almost textile feel to it, with our jasper doublet, which is a stone that has a custom cut with a crystal over it. The pin is mostly Lucite, hand-painted, it’s the one in Iris’ ad.

Q: Who do you have in mind when you design?

A: I definitely like the idea of a uniform for the unique and trying to embrace people’s individuality. I never was a tennis club kind of guy. I have always been on the outside and perceived somehow on the outside growing up, and that resonates in how I design. I’m more drawn to people who are comfortable being on the outside and don’t want to blend in, who want to have fun and not take themselves so seriously. Also there’s a little bit of an artist in the people who buy the jewelry even if they aren’t artists.

Q: How does your Brooklyn base influence or inspire you?

A: I’ve grown up here, in Bay Ridge, which is incredibly blue collar — a cops and firemen neighborhood and definitely not pretentious. I went to Bronx High School of Science and had a super long commute; all my friends were living in Manhattan, and I was exposed early on to many ethnicities, many cultures and a lot of art. My parents are professors and really educated us in an inadvertent way by immersing us in the arts. So that was my foundation.

What stimulates me the most is mixed ethnicities; my dad is Syrian and my mom is Irish, so I’m also a product of it. You get a Belfast and a Damascus and you get a picture. A fiery combo. But they’re still together.

Brooklyn, as trendy as it’s gotten, which I’m not sure how I feel about, there’s still a good friction of cultures and I think that that is one great thing about an urban area. It’s one of the things I get most excited about. People think I go to fashion shows and that’s what’s going to get me psyched, and it’s actually not.

Q: How did you get started in jewelry design?

A: My parents are definitely left field thinkers. They both have doctorates in American history and then they both switched; they got master’s degrees in computer science in the late ’70s.

When I was 13 I had already shown an interest in jewelry. I’d go to an antique store in Maine where we spent time in summer — not the chic part of Maine, not Kennebunkport, an hour and a half from there, near Augusta. The woman there, Mrs. Ivers, with cotton candy white hair, would show me the antiques. With jewelry I was kind of amazed how small it was and how it lasted and, anyway, when I was 13 my parents gave me some vintage jewelry, they spent $150 or $300 on it, for me to sell on the street. I already had been selling on the street since I was 8. And that was my birthday gift, which is so crazy. And I was really happy about it. And so I was a super entrepreneurial kid.

Q: What was first thing you sold on the street?

A: My parents had made this beautiful flower cart, they painted it with these Chinese cherry blossoms on a yellow cart. They went to the flower district and spent maybe $60, and my brother and I, maybe it was for some learning experience about making money, sold the flowers. I totally took to it. My brother hated it. He did it one day and never again. For me, it never stopped.