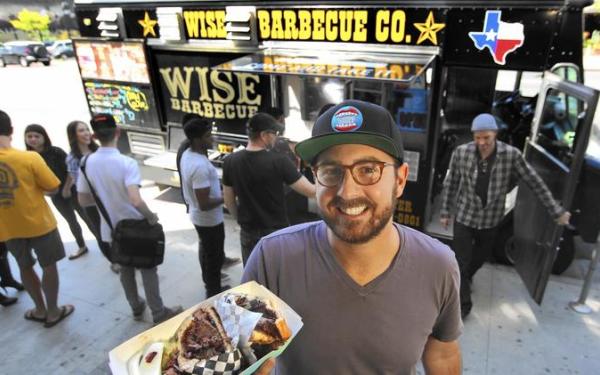 When gourmet food trucks were at the peak of their popularity, traveling to distant locations and waiting hours in line for a taste was part of the thrill.

But with thousands of the mobile kitchens on the road today, the frenzy has faded, forcing many vendors to look for a new edge.

Now a website that's been there since the beginning is helping fashion a second act.

Ross Resnick launched Roaming Hunger as a fledgling USC grad in 2009, just as buzz was building for the new dining phenomenon on wheels.

The goal: create an online directory to follow the new wave of mobile food vendors in real time. No one was too small. Resnick would go so far as to track down and list someone who sold baklava out of a rolling suitcase.

Roaming Hunger became the go-to site and app for the budding scene. But Resnick still had little idea how to make any money save for a few online ads. Then a business model fell in his lap.

Friends and acquaintances began to ask for help finding trucks to cater parties. Requests also poured in to rent trucks for marketing campaigns.

"No one is lining up two hours for a sandwich. Those days are over," said Resnick, 30, whose company is headquartered in an office near the eastern edge of the Sunset Strip in West Hollywood. "Now it's about getting a food truck to your daughter's bat mitzvah or a corporate event."

Roaming Hunger acts as a clearinghouse of sorts for the industry, connecting customers across the country with a directory of more than 6,000 mobile food vendors.

The company — turned down by venture capitalists worried food trucks were just a fad — says it's turning a profit by charging a fee for each booking, and rolling out corporate marketing events.

There are other food truck directories, including Yelp, but none that focus so heavily on helping operators squeeze out more profit.

"From a national perspective, there's no one doing what Roaming Hunger is doing," said Matt Geller, chief executive of the Southern California Mobile Food Vendor's Assn. "They're helping explore different ways to make money for trucks. Any smart business knows they can't be stagnant."

Michael Mikhail is a fan. He launched his first gourmet truck in 2010, Hungry Nomad, which serves food styled after his family's successful Armenian-Lebanese bakery chain in the L.A. area. He's since added two more trucks.

When Mikhail started, he could park anywhere and draw a crowd. Now, he said, food trucks are everywhere, and it's tough to make a buck. It's all about staking out and returning to the best locations — not unlike the days when food trucks were better known as roach coaches.

"It's small margins, what we have to do," Mikhail said.

That grind left him open to something new. So he was primed when Roaming Hunger called with catering requests.

Prices vary. On a slow Monday evening in winter, Mikhail might agree to cater an average-sized event for as low as $500. A Friday afternoon in the summer can command as much as $1,500.

When he's not catering, Mikhail might have his truck wrapped in vinyl graphics for a special event. Roaming Hunger calls these marketing campaigns food truck takeovers.

Last summer during the NHL playoffs, one of Mikhail's trucks was wrapped to look like ice to promote coverage of the games on NBC. He drove the truck around the Southland passing around Popsicles.

Resnick cut his teeth four years ago marketing Honest Tea before Coca-Cola bought it, which is why he takes particular interest in the takeovers.

That job taught the Mission Viejo native to barter creatively to get his beverage noticed. He persuaded Coachella music festival organizers to display Honest Tea posters in exchange for a truck full of tea, saving the company sponsorship dollars.

"It was the foundation for food truck takeovers because I learned the basics of event marketing and how to be really scrappy," Resnick said.

Food trucks, he said, are an unusually effective advertising tool because they encourage onlookers to participate with all five senses.

To promote a new Saks Fifth Avenue men's store in Chicago, Roaming Hunger found a coffee and doughnut truck operator to drive through the city's downtown shopping district handing out hot chocolate and cookies. People who used the hashtag #trackthattruck on social media had a chance to win gifts from the store.

For another promotion, Roaming Hunger redesigned a burger truck and fitted it with an airplane tail fin to tout and serve some of Lufthansa's new onboard fare. The truck was driven cross-country from New York to L.A.

Resnick declined to disclose company revenue but said it was equally split between booking fees for catering and the takeovers.

The company is looking to hire its 30th employee, more than tripling its roster in two years.

One of those staff members is Resnick's dad, a former auto salesman who comes in once a week from Mission Viejo to work on a fast-growing new business: an online market to buy and sell food trucks.

Resnick was inspired to launch Roaming Hunger after falling in love with street food in Hong Kong and Thailand while studying overseas. He saw the food truck craze as the American answer to street food culture and he hopes it never goes away.

"Our mission is to promote and perpetuate the street food movement," Resnick said.

Special Features
We tried more than 25 alternative proteins. These were the best (and worst)
970 views