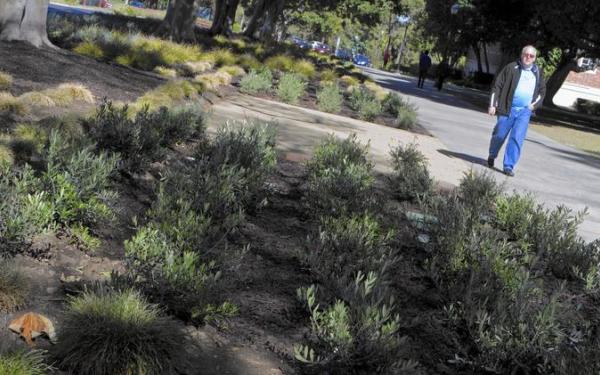 In a residence hall at UCLA, 84 students share a floor dedicated to cutting waste and preserving the environment: They take five-minute showers, they compost and recycle, they goad each other to turn out the lights and, through a grant, they purchased reusable plastic and bamboo dishes and utensils for personal use in the dorm.

"We call ourselves the sustainable living and learning lab and our floor is really just about education and facilitating student leadership in the area," said Sarah Dahnke, 21, a global studies major and one of the dorm's resident assistants.

Efforts like those of Dahnke and her dorm mates are being replicated at colleges and universities in California and across the nation as part of a growing movement to incorporate environmental protection into research, curriculum and student life.

California institutions have in many ways been in the vanguard of progressive policies to promote energy efficiency and reduce their carbon footprint.

Now, in the grip of a severe drought and facing mandatory water restrictions, the state's colleges are under intensified pressure to reduce consumption and ramp up other conservation measures. They have many advantages: faculty researching the cutting edge of sustainable technologies and students eager to embrace the cause.

But they also face tough challenges, with many of the larger campuses being virtual cities within cities, including thousands of students and faculty, housing, transportation and hundreds of acres of land to contend with.

Campuses throughout the state are installing low-flow urinals and shower heads, faucet aerators and high-efficiency toilets in dorms. Many are turning off sections of irrigation systems and letting grounds go brown, with plans to install drought tolerant plants and hardscape.

University of California President Janet Napolitano has committed to achieving carbon neutrality on the 10 campuses by 2025. The state's 112 community colleges are studying which water conservation methods are yielding the greatest savings, partly in response to questions from Gov. Jerry Brown and the Legislature on efforts colleges are making, said Paul Feist, a spokesman for the community colleges chancellor's office.

At Cal State Long Beach, a project to convert lawn areas to drought resistant landscaping, with the first phase — encompassing about two acres of the 322-acre campus — is expected to be completed in August. The conversion is projected to save about 3.5 million gallons of water and $15,000 in water costs annually.

The campus, with 35,000 students, consumes about 200 million gallons of water each year, about 50% of it used to irrigate lawns and athletic fields. The campus is also studying how to use reclaimed water in place of potable water, said David Salazar, associate vice president of physical planning and facilities.

Meanwhile, a wide variety of college classes are incorporating instruction on environmental impacts. In a "green" chemistry class at Cal State Fullerton, students are asked to calculate their carbon and water footprint, to collect their trash for 48 hours to illustrate how much is thrown away and develop more environmentally friendly products, said professor and interim librarian Scott Hewitt, who spoke recently at a campus symposium. The school offers a master's degree in environmental studies and is considering developing an undergraduate minor in sustainability, Hewitt said.

Despite efforts such as these around the nation, some experts contend that even more far-reaching measures are needed that will require greater investment.

"Unfortunately, many educational institutions are more risk-averse than corporations; they're progressive in terms ideas but conservative in terms of their ability to change business as usual and consider the long-term investment," said Wynn Calder, co-director of University Leaders for a Sustainable Future.

Funding is certainly an issue for California's public colleges, which are still recovering from the loss of billions of dollars in state support during the recession.

Local water districts are collaborating with colleges to help sponsor some water reduction projects, but generally universities make use of the same conservation incentives that are available to the general public. There are few dedicated funds, for example, for retrofitting public buildings to lower water use, said Peter Brostrom, water use efficiency manager at the California Department of Water Resources.

"The UC budget is stretched and state grant funding is often directed to water suppliers and there's a lot of competition for that," Brostrom said. "Right now, [the] lack of resources are constraining some of these needed improvements."

Less than a year ago, when California officials were beginning to realize the extent of the drought emergency, a water main break flooded parts of UCLA with 20 million gallons of water. A water-saving campaign at the Westwood campus reduced consumption by 9 million gallons in just the 15 complexes that house about 12,000 students, said Josh O'Connor, who organizes the student Team Green program, which places student leaders in dorms to encourage their peers to conserve.

It used to be that when lawns turned brown, complaints would follow. Now, an overly lush lawn invites questions, Katz said.

What's tricky, Katz said, is that a lot green space is used for events or as respite for faculty, students and staff and can't easily be replaced. The aesthetics of a campus, what draws students and their parents, is still that of verdant green — more an East Coast ideal than West Coast climate reality. But those attitudes too are changing.

Sidhaant Shah, 22, a chemical engineering and environmental science major, is among a group of students conducting environmental research on campus, such as how landscaping changes biodiversity.

"When I first came to California a few years ago, there was a lot more green grass and snow," Shah said. "In class, we see data showing the changes and then you see it in nature and you realize, yes, it's getting worse."