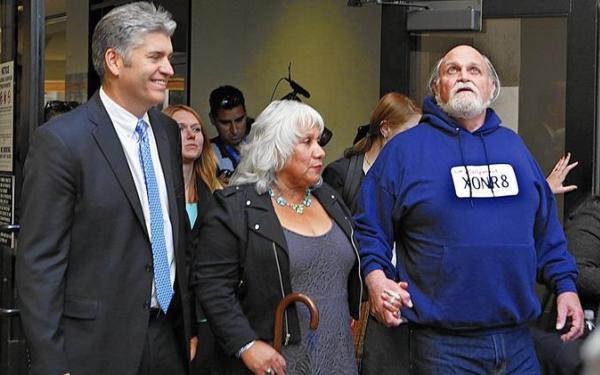 Michael Hanline looks up at the sky as he walks out of the Ventura County Jail with his wife, Sandee Hanline, and Justin Brooks, left, director of the California Innocence Project.
(Credit: Anne Cusack / Los Angeles Times)

Michael Ray Hanline, a former inmate who spent 36 years in prison for a murder he didn’t commit, is now 100% free.

A judge on Wednesday dismissed charges against Hanline after the Ventura County district attorney's office decided to drop murder charges against him, citing a lack of evidence to continue the case.

“He is finally free,” said Justin Brooks, Hanline’s attorney and director of the California Innocence Project.

Hanline was freed from prison Nov. 24 after a judge overturned his 1980 conviction in the death of J.T. McGarry, who was shot to death two years before. Hanline is the longest-serving California inmate to be wrongfully convicted of a crime.

But the possibility of a retrial still hung over him.

After his conviction was overturned, he was forced to wear a GPS ankle bracelet while prosecutors reviewed his case.

Then on Tuesday, the district attorney announced the move to dismiss charges against Hanline.

“After a months-long investigation to determine whether Hanline should be retried, the district attorney has now concluded that the case cannot be proven beyond a reasonable doubt, and has made a motion to dismiss the case,” Dist. Atty. Gregory Totten said in a statement.

“However, given the current state of the evidence," he continued, "the district attorney would oppose any motion seeking a finding of factual innocence.”

Totten’s office maintained its case against Hanline is “still supported by probable cause, but cannot be proven beyond a reasonable doubt.”

At the time, prosecutors believed Hanline became jealous after learning that he and McGarry were romantically involved with the same woman. They alleged Hanline and an accomplice killed McGarry in 1978.

Hanline was sentenced to life in prison without parole.

Years later, officials discovered that DNA evidence collected at the crime scene did not match Hanline's or that of his alleged accomplice, according to court documents. A key witness was also under the influence of drugs when she testified against him.

“This case was paper thin … and the evidence they had 36 years ago -- we shredded,” Brooks said.

But it wasn’t an easy battle.

When Brooks started the California Innocence Project 15 years ago, Hanline’s letter was one of the first he received.

For years, Brooks fought to unseal court documents in Hanline’s case. Meanwhile, he met with Hanline in prison, where they talked about fishing.

His attorneys continued to argue his innocence until they finally got a break.

Since his release, Brooks said Hanline has gone fishing and is learning how to use a cellphone, computer and the Internet.

Hanline even bought a motorcycle and has been riding along California coast.

“California,” he told Brooks, “has changed.”