Victoria Beckham wants customers ‘to be the best versions of themselves’ 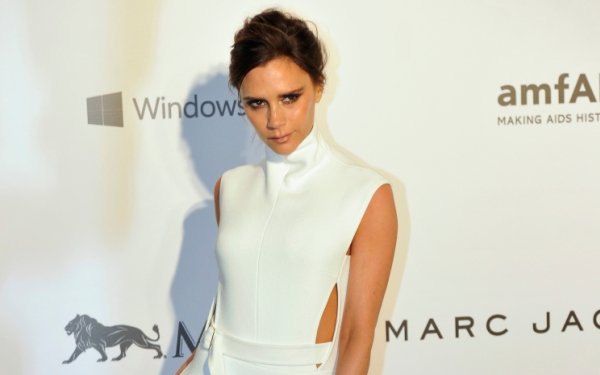 LOS ANGELES — Victoria Beckham may have moved her family back to London, but a big part of her heart is still in Los Angeles.

She and her husband, former L.A. Galaxy star David Beckham, have been in town on spring break with the kids, where they’ve been photographed hiking, surfing, taking SoulCycle classes and eating acai bowls. (The British press has been there every step of the way.)

But designing mom Victoria, 40, has managed to squeeze in some work, too, hosting a trunk show on a recent Tuesday at Barneys Beverly Hills, followed by a dinner on the terrace at Fred’s that night.

David Beckham co-hosted the starry soiree, which was attended by fashion press, stylists and several of the couple’s close friends, including Gwyneth Paltrow, David Furnish, Kate Beckinsale, James Corden, Eva Longoria and Rachel Zoe (whose kids are pals with the Beckhams’).

“I loved L.A. ... I had the most incredible six years here,” Beckham said earlier in the day in the green room before her trunk show, as daughter Harper, 3, played with her rainbow-haired My Little Pony nearby. “But I don’t think you can appreciate it when you have it every day how beautiful it is here ... just the space.”

The former Spice Girl has been in the public eye for more than 20 years as a pop singer, wife of soccer great David, star of documentaries about their life, style icon and magazine cover model. She launched her clothing label in 2008 after several less formal forays into the fashion industry that included a collaboration with jeans brand Rock & Republic and a modeling gig for Marc Jacobs that had her peeking out of a shopping bag.

In seven years, Beckham has pushed her ready-to-wear past the arc of celebrity vanity project, establishing it as a mainstay on the runway at New York Fashion Week, where her modern, practical designs have earned solid reviews, despite looking a tad derivative at times.

Last year she opened her first boutique on Dover Street in London. It carries all five of her collections: runway; the main label’s casual little sister, Victoria by Victoria Beckham; denim; handbags and sunglasses. (Her first capsule line of aviators just arrived in stores last week.) And everything is designed in-house in London.

“I spend a lot of time in the store. I love to meet my customer and hear what she wants,” she says. “That’s why I’m doing what I’m doing, because I want to empower women to be the best versions of themselves.”

The designer made her name on sleek, body-con sheath dresses with interior corsetry, waist-cinching grosgrain belts, mesh insets and other details that suck the body in and force Beckham-like good posture. But in recent seasons, she’s also added looser styles, more tailored pieces, knitwear and outerwear to broaden her reach and appeal. (Beyonce was recently photographed wearing one of Beckham’s navy-and-white-stripe knit midi skirts.)

For fall, there are sculptural coats and knits with oversized button details, trousers that tie in a bow at the waist, and asymmetrical, draped midi skirts that combine silk pleats, chenille and corduroy elegantly in one.

“I always want the clothes to be flattering.... We have great fabrics and a lot of attention goes into seaming details, so everything looks great from every angle, but I also like to have something unexpected there,” Beckham says.

It appears Beckham’s aesthetic is loosening up, like her personality. Despite her seemingly strait-laced, non-emotional demeanor, Beckham enjoys a good laugh, especially at her own expense. In a 2014 video for Vogue.com’s “73 Questions” series, when asked to name the movie version of her life, she deadpanned, “Hunger Games.” She often posts funny photos to her 8 million Twitter followers (recently, a snap of hubbie David’s gray-flecked beard and the hashtag #silverfox). And although she works in the realm of $3,000 dresses, she’s accessible enough to be booked for an upcoming “Ellen” show, where she hopes to “put some of those Posh Spice moves to good use.”

“I was never out to change people’s perception. I was aware of them, and that was OK,” she says. “But social media has helped. Not that I tweet or Instagram to show my personality, but it comes across naturally.... The more I meet customers, and people get to know me, they know that I take my profession seriously, but I also like to have fun.”

Friends say they could see the Beckhams moving back to L.A., where they still have a home and seem to travel every time the kids have a school break. But in the meantime, the designer is focusing on growing her business internationally. On her docket next is a second store, this one in Hong Kong. “Asia is my fastest-growing market,” she says. And there may be a future cheap chic collaboration, “if the timing and the partner were right.” (David Beckham is blanketing the world’s billboards in underwear ads for H&M.)

But she’s not interested in another reality show or a lifestyle website in the vein of Paltrow’s Goop.

“I’m respectful of my past, but I really enjoy what I’m doing now,” she says. “I have a point of view and have a lot to say ... I don’t want it to be about me. It’s about the clothes and the customer.”