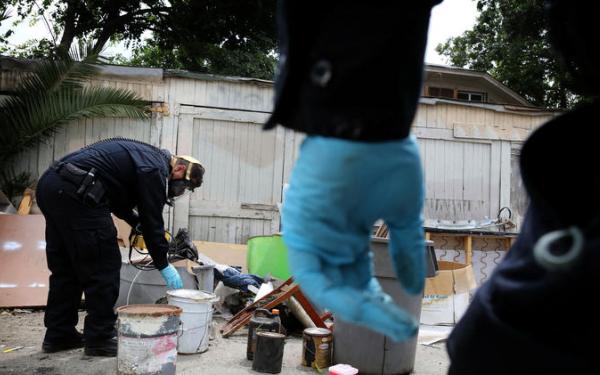 Standing in a Pico Union alley where 13 tons of illegally dumped trash was removed in recent days by sanitation crews, Garcetti signed an executive order and laid out the framework of a $9.1-million "Clean Streets Initative."

"Everybody who lives here, who works here, who visits here should be able to walk the streets of our city free of litter and debris," Garcetti said.

His order instructs the Bureau of Sanitation to install 5,000 new trash cans over the next four years. With 1,000 current receptacles, L.A. lags far behind other large cities in the number of city-operated trash cans. Each additional can will result in two tons less litter on city streets each year, Garcetti said.

A key part of the initiative is to develop a data-driven rating system to measure the cleanliness of every street in the city. The current goal is to build such an inventory of the city's roughly 70,000 street blocks by the end of the year. Garcetti said this task can be accomplished with five full-time inspectors.

Cities including New York, San Francisco and Philadelphia use street rating systems. Based on photographic sampling of streets and sidewalks, street cleanliness measurements in New York improved to more than a 90% acceptable rating last year, compared with 53% in 1980, according to a city report last year.

The L.A. mayor's executive order also instructs the Bureau of Street Services to deploy a "strike team" to conduct targeted clean-ups in areas with heavy dumping. The team will cost the city roughly $2.5 million per year, said Kevin James, president of the Board of Public Works. It is unclear how many city employees will be on the strike team.

Garcetti's order also directs the Board of Public Works to recruit and train volunteers to work on the Clean Streets Corps.

Bryan Monge, a crew supervisor with the Los Angeles Conservation Corps, works in Councilman Gil Cedillo's District 1. On a typical day, he said, he and his workers pick up three tons of discarded items such as furniture, TVs and shopping carts.

Pico Union resident Jose Teos lives next to the alley off South Burlington Avenue that was just cleaned up. He said he had given up on trying to park his car in the alley because it is typically so full of illegally discarded furniture and appliances.

"It's really bad here, Teos said. "I go to other cities and I don't see it this bad."