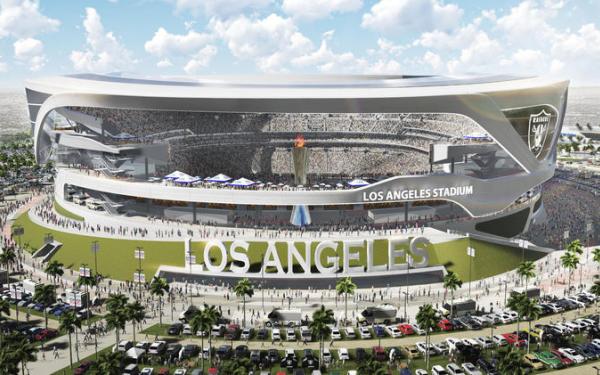 A new rendering of the proposed $1.7-billion stadium in Carson shows a side view of the open-air arena.
(Credit: Manica Architecture)

Two months after unveiling plans and renderings for a stadium in Carson, the San Diego Chargers and Oakland Raiders have completely overhauled their design for the $1.7-billion project.

The Chargers and Raiders presented their concept in New York this week to NFL Commissioner Roger Goodell and the Committee on Los Angeles Opportunities, composed of six team owners.

Although the original renderings were created with input from only the Chargers, the new design is the result of almost two months of collaboration between the franchises.

The revised plans show a futuristic open-air venue with a peristyle intentionally reminiscent of the one at the L.A. Memorial Coliseum.

"We wanted the building to be iconic and sleek, like a luxury sports car," said David Manica, president of Manica Architecture, who is designing the stadium. "Very aerodynamic, in motion, flowing lines from every angle."

A signature element of the design is a 115- to 120-foot tower that rises through and extends above the main concourse. It would serve as a pedestal for a cauldron that would change depending on the team. When the Chargers play, simulated lightning bolts would swirl behind glass encasing the tower and, if the team were to score a touchdown, a bolt would shoot out of the top. For Raiders games, a flame would burn in the cauldron in honor of legendary team owner Al Davis.

The plan would not call for the flame to burst up from the tower in the event of a Raiders touchdown.

If the venue were to play host to a Super Bowl, the tower would be transformed into a giant Lombardi Trophy.

Carson's City Council unanimously approved the privately financed stadium Tuesday, though many details remain to be negotiated between the city and teams. The project would occupy the 168-acre site of a former landfill next to the 405 Freeway.

Although the previous stadium design included a multilevel suite tower on one side, the new plan's contiguous exterior encases a horseshoe seating configuration that's open on one end. Designers expect that change to help surround the field with noise. Flowing bands wrap around the outside of the structure.

The "core concepts" of the project, Manica said, focus on an open and airy design.

"Ownership really wants to celebrate the history and enthusiasm of football in Los Angeles," he said.

Manica formerly worked at HOK Sport. There, he led the design of the Houston Texans' stadium, the renovation of the Miami Dolphins' stadium and the seating bowl of Wembley Stadium in London.

A rival stadium project in Inglewood, backed by St. Louis Rams owner Stan Kroenke, would have a roof — though it is open air on the sides — and artificial turf. It would be set 100 feet into the ground. In Carson, the plan is to have seating at ground level and use natural grass.

Kroenke has had a small army of architects and engineers working on the design for his project for a year, and the plans are significantly further along. The Chargers first investigated the Carson site last summer and started collaborating with the Raiders on the stadium design March 1.

Dozens of renderings of other would-be NFL stadiums in the Los Angeles area have come and gone in the two decades since the Rams and Raiders left. None of them materialized. That included one proposal in 1999 for a Spanish-style stadium on the same site in Carson with a bell that would ring after touchdowns.

Meanwhile, Manica's 10-person team is essentially finished with concept designs for the project. The next step is schematic designs, which contain significantly more detail and are expected to take four to six months to complete.

The color of the stadium's seats has not been decided. But Manica has entertained the possibility of installing clear seats that reflect the color of lights shining on them.

The Chargers and Raiders are expected to present their new stadium design to the rest of the 32 teams at the league meetings in San Francisco next month. Kroenke and the city of St. Louis also are expected to give separate presentations.

Ultimately, the NFL will decide which stadium project to pursue, with that decision hinging on the three-quarters majority vote of the league's owners.

Jeffrey Pollack, special advisor to Chargers President Dean Spanos, said that a goal for the Carson venue is "to create a signature building for Los Angeles that people recognize worldwide."

With 3 NFL teams and 2 stadiums at play for L.A., here are 9 possible outcomes

NFL stadium in Inglewood could mean a billion dollars, 40,000 jobs