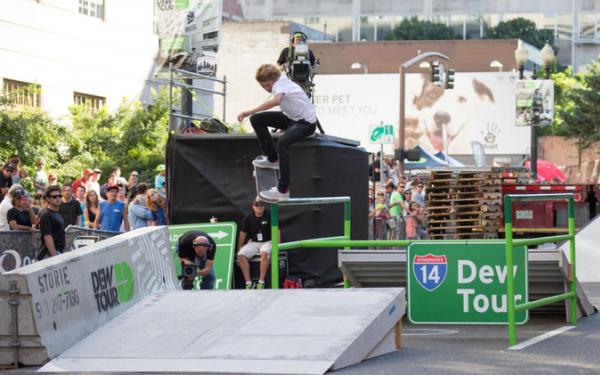 That will change soon.

On Thursday, the Dew Tour announced Los Angeles as the second stop on its summer tour. Downtown Los Angeles will host the event from Aug. 14 to 16.

The tour often includes BMX events, but the L.A. stop will feature only skateboarding events. There will also be concerts, art exhibits and films, and the event will be headquartered at the Ace Hotel, with one event near Grand Park.

Stiepock calls Los Angeles the “mecca of skateboarding,” and much of the industry is centered in the city. When the Dew Tour decided to move from Ocean City, Md., the appeal of Los Angeles was strong.

“Essentially, for the athletes, for the industry, it’s a home game,” Stiepock said.

Typically, the Dew Tour attracts several high-profile names at each stop. NBC broadcasts the events and will announce broadcast times at a later date.

Los Angeles will be the second of three stops this year. The first will be Chicago on June 20 and 21. The winter Dew Tour will be in Breckenridge, Colo., from Dec. 10 to 13.

Attendance in recent years has been strong. Last year, the event in Ocean City drew about 105,000 fans.