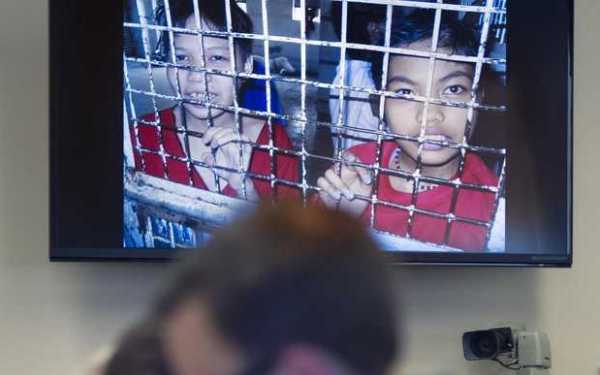 A photograph of imprisoned Philippine children is shown as witnesses testify before a House Committee hearing on the fight against human trafficking, in Washington, D.C. on April 22, 2015.
(Credit: Cliff Owen / AP)

WASHINGTON — Congress, which for years has put the “fun” in dysfunctional, actually appears to be functioning lately.

Thursday’s vote to confirm Loretta Lynch as attorney general, and a day earlier to approve an anti-human trafficking bill, capped a surprisingly productive burst of action that also saw Congress pass a bill to revamp Medicare payments to doctors, move federal budget resolutions and craft a bipartisan deal to give Congress a voice in the Iran nuclear deal.

Even President Barack Obama got caught up in the sudden burst of bipartisanship, inviting lawmakers from both parties to the White House Rose Garden earlier this week to celebrate the signing the so-called Medicare “doc fix” bill into law.

“Now, none of us are spiking that football or saying that, you know, we’ve done miraculous things, but it’s undeniable that we have made discernible, concrete progress on important matters that affect the lives and the quality of life of the American people,” Senate Majority Whip John Cornyn, R-Texas, said on the Senate floor earlier this week.

“I think there’s a real desire among a lot of the members here to get some work done,” Cardin said. “There’s a lot of work to be done, so I hope it does last.”

It hasn’t all been kumbaya, congressional experts and some lawmakers say, but a Congress with a do-nothing reputation is starting to get things done.

It’s far cry from the 114th Congress’ start in January. When Republicans assumed control of both the House of Representatives and the Senate they vowed to prove that they could govern after being routinely derided as being little more than obstructionist in previous Congresses.

But House Speaker John Boehner, R-Ohio, appeared unable to control his caucus at the outset and was forced to pull or delay bills because of lack of support from a small but rebellious group of rank-and-file conservative Republicans.

Senate Majority Leader Mitch McConnell, R-Ky., envisioned running a freewheeling chamber where bills are amended, debated and voted on on the chamber’s floor.

His vision was tested early by Democratic filibusters on a Keystone XL pipeline bill and Senate Republican angst over a House GOP-sponsored measure that would fund the Department of Homeland Security and reverse some of Obama’s executive actions on immigration.

“Now, from a Politics 101 standpoint, things are working the way they’re supposed to work,” Loomis said. “You bring up bills, you vote on amendments, you pass legislation.”

Congress is doing more because it’s working more, according to the Bipartisan Policy Center. The Washington-based think tank’s newly created “Healthy Congress Index” shows that House members and senators worked more days in the first quarter of 2015 than both chambers did at this point in the previous two Congresses.

The increased work time in Washington has translated into more legislative productivity. In the House, for example, committees have approved 31 bills thus far this year, exceeding the 24 bills during the 113th Congress and the eight bills by the 112th during the same time frame.

Senate committees have approved 15 bills in the first quarter of 2015, surpassing the eight bills reported by this point during the 112th and the eight during the 113th Congresses.

The Senate has considered about 202 amendments — 105 from Democrats and 97 Republicans — so far in the current Congress. In the 113th Congress at this point, 134 Senate amendments were considered.

Senate Minority Leader Harry Reid, D-Nev., said the number reflects a willingness by Democrats to work with the Republican majority, a courtesy he says wasn’t extended when Democrats ran the chamber.

“Everything we’ve been able to get done has been things we tried to get done when we were in the majority and they stopped it through their filibusters,” Reid told reporters Tuesday. “We are not opposing things just to be opposing them as they did.”

“We’ll see if they can sustain the trend in having more debate, more days in session, more bills reported out of committee and acted upon,” she said. “It’s showing slight signs of recovery, but probably not quite ready to remove the patient from the ICU at this point. At least the indications are more positive in the sense that it hasn’t gotten worse.”

The change hasn’t been lost on the White House.

“I just want to thank everybody for showing that Republicans and Democrats can come together and put aside partisanship for something important — not just on small things, not just on the must-dos, but on things that actually make the country work better,” Obama said of the Medicare “doc fix” bill. “We crossed one of Washington’s perennial ‘cliffs’ off the list for good. And my hope is that that helps build a little more momentum to get some other good stuff done.”

Obama shouldn’t hold his breath. With a presidential and congressional election year looming and a host of contentious issues ahead — including budget appropriations, a pending full Senate vote on the Iran bill, and legislation to give Obama so-called fast-track trade authority — Congress could revert to its old partisan ways.

“It’s easy to be bipartisan when you’re adding to the debt, and that’s the problem in Washington,” said Rep. Raul Labrador of Idaho, echoing the sentiments of a cadre of fellow House Republicans who aren’t in a compromising mood with Democrats or the White House. “No one here wants to make the hard choices.”

“I’m a pretty optimistic person, but I’m not sure, we have to see,” he said. “It will be difficult to sustain it.”

The University of Kansas’ Loomis said Americans should be pleased about the recent spike in legislative action but shouldn’t get lulled into thinking that the days of the partisan do-nothing Congress are over.

“The excitement of Congress getting things done just shows how abysmal things have been in the last few years,” he said.