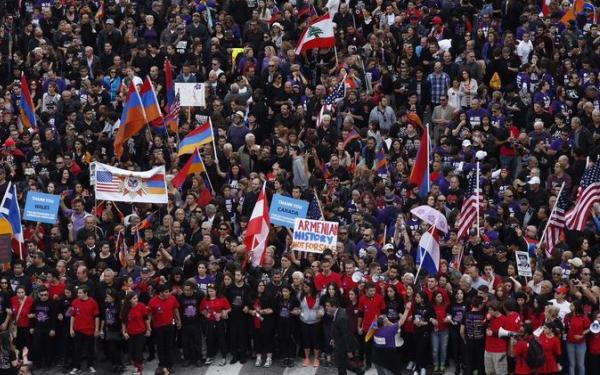 Marchers created a mesmerizing blur of brightly colored flags Friday as they walked through the streets west of downtown Los Angeles to commemorate the 100th anniversary of the Armenian genocide.

Participants had a common, persistent theme, calling for recognition of the deaths of about 1.2 million Armenians as a genocide. Other estimates range to 1.5 million.

Many held nearly identical azure signs that thanked various countries for recognizing the Armenian genocide. President Obama has not used the word "genocide" in connection with the massacres since coming to office — and his name was greeted with boos at a ceremony before the march.

Many signs voiced forceful messages: "We Demand Justice" and "Turkey Must Pay."

The procession was multigenerational, with small children riding atop parents’ shoulders; older women linked arms for balance as they moved forward.

One group chanted a traditional song, which competed with the whir of helicopters overhead.

Morning traffic was especially bad on the 101 Freeway on Friday between the San Fernando Valley and downtown, possibly due to events commemorating the genocide, according to the California Highway Patrol. The northbound and southbound offramps at Sunset Boulevard were scheduled to be closed until noon to accommodate marchers. Local street closures also caused traffic tie-ups.

In the streets, participants paused briefly to join voices in an Armenian prayer, some making signs of the cross.

A century ago, Ottoman Turkish authorities had targeted Armenian Christians in the mass killings. Modern day Turkish authorities have expressed regret at the loss of life but denied that there was a systematic plan to kill Armenians. They contest the use of the word "genocide," attributing the casualties to the harsh events of war.

Obama’s reluctance to use the word is in apparent deference to Turkey, a country that has become a key American ally in that part of the world.

Tarzana resident Anna Karapetian, 31, said her family and others were torn apart, never knowing what happened to some family members, leaving an everlasting scar, she said.

"There's always a missing puzzle, a missing piece in their families as far as who they are and who they're going to be ... regardless of how many years go by," Karapetian said.

Sofie had decorated a sign with a large Armenian flag and a sketch of a gun with a red "X" over it.

"The seeds are there," Karapetian said, referring to the poster and her daughter.

Passing on language, religion and culture ensures the tragedy won't be forgotten and that future generations will know where they came from, she added.

"There's so much light shining on Armenia," she said. "We waited many, many years for this to happen. It's a new beginning for us."

The six-mile trek began in Little Armenia and will conclude formally at 6 p.m. in the 6300 block of Wilshire Boulevard, the location of the Turkish Consulate General of Los Angeles.

Just before the march began, Los Angeles City Councilman Paul Krekorian added his own family’s narrative to the tales of suffering recounted among those gathered.

He talked of his great-grandmother having received a letter about what happened to her brother, a math professor at Euphrates College, a school in eastern Turkey.

The brother had been seized by Turkish authorities and had his beard pulled from his face. His torturers then cut out his tongue and left him to die.

"For my family and for many of us that are here, we don't need any help in remembering the Armenian genocide because it is deeply personal to us," Krekorian said.

He spoke Friday morning in Little Armenia, at the corner of Hollywood Boulevard and Western Avenue, which was dedicated as Armenian Genocide Memorial Square.

Before the march, Elizabeth Marks, a Studio City resident, recounted that 100 years ago today, her father, at age 14, was deported and forced to march across the desert.

Although her father never talked about what happened, Marks found his manuscripts and penned a newly published novel, "Zaven's Destiny: A Childhood Lost to the Armenian Genocide."

Obama on Thursday said the massacre was the "first mass atrocity of the 20th century." Although he has not used the term genocide while in office — after pledging to do so as a candidate for president — he defended his record in recognizing what happened.

“I have consistently stated my own view of what occurred in 1915, and my view has not changed," Obama said in a statement. "A full, frank and just acknowledgment of the facts is in all our interests. Peoples and nations grow stronger, and build a foundation for a more just and tolerant future, by acknowledging and reckoning with painful elements of the past."

Howard Blume and Veronica Rocha contributed to this report.