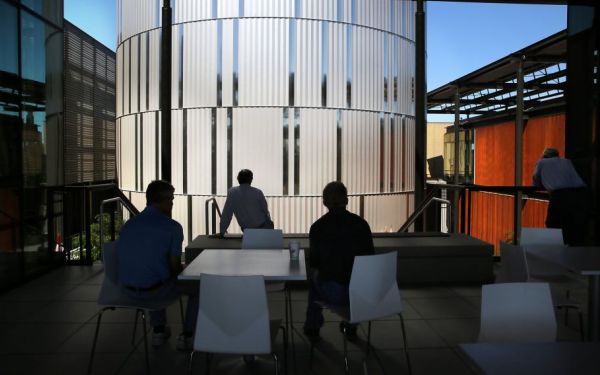 For some big universities, the campus power plant may one day become a thing of the past.

School officials recently flipped the switch on a system that uses more than 22 miles of water-filled pipes to heat and cool 155 buildings on campus, while a newly built electricity substation draws power from the grid. Next year, the school will even have its own solar power plant.

When the roughly $500 million energy upgrade is done, more than two-thirds of Stanford’s electricity will come from renewable sources. Stanford’s old power plant will soon be torn down to make room for academic buildings.

“It’s almost like it’s within practical reach to have the sun, the wind or a combination of both run our whole university,” said Joseph Stagner, director of the school’s Department of Sustainability and Energy Management. “It’s like a George Jetson kind of thing come to life.”

While the price may sound steep, the school would have spent roughly as much to replace its aging power plant, commissioned in 1987. Add in savings on fuel, and university officials figure they’ll save about $420 million over the next 35 years. And cut Stanford’s greenhouse gas emissions 68 percent.

The solar power plant, composed of 150,000 photovoltaic panels, will be built off-campus by SunPower Corp. of San Jose. SunPower will also install panels on some of Stanford’s buildings. Together, the on- and off-campus panels will generate up to 73 megawatts of electricity. That’s more than the old 56-megawatt plant, although the output of the panels will vary during the day. Power from the electrical grid will handle the rest.

“We will see this replicated,” said SunPower CEO Tom Werner. “We’re working with parts of the (UC) system, and in all likelihood, it’ll be something similar. Consider this the beginning of a new market.”

Although SunPower had to compete with other solar companies to land the deal, the school and the business have old ties. SunPower was founded in 1985 by a Stanford electrical engineering professor, Richard Swanson. The company will mark its 30th anniversary — a rarity in the solar industry — on Friday.

While many schools and businesses have recently installed solar panels, Stanford’s system for heating and cooling buildings is rarer.

The new Central Energy Facility, built on the western side of the campus, circulates hot water to heat buildings and cold water to cool them. The hot and cold water travel in separate sets of pipes, each in a closed loop so the water won’t need constant replacement.

The system’s most innovative feature, however, lies in the way the two sets of pipes interact.

The cold water gradually heats as it travels through the campus, returning to the Central Energy Facility 14 degrees warmer than it left. Equipment within the facility strips that excess heat from the cold-water pipes and adds it to the hot-water pipes. Stagner likens it to an air conditioner on the side of a house venting hot air.

“Instead of blowing that hot air to the sky, we capture that heat and use it,” he said. “We don’t know anybody in the world who’s doing anything of this scale of this type before.”