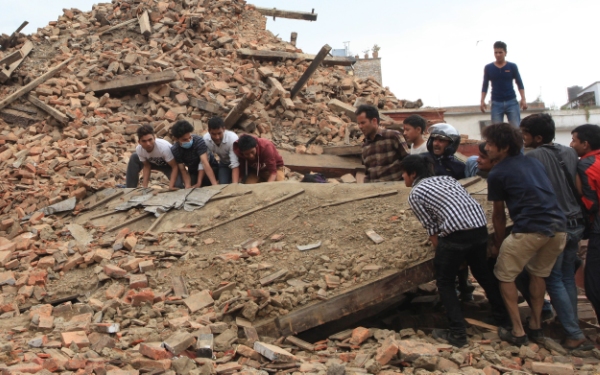 Rescuers try to remove the debris from a temple at Hanumandhoka Durbar Square after an earthquake in Kathmandu, Nepal, on Saturday, April 25, 2015.
(Credit: Sunil Sharma/Xinhua/Zuma Press/TNS)

Residents reported seeing trails of destruction — collapsed walls, broken windows and fallen telephone poles — as they drove through the capital. At nightfall, they described Kathmandu as a “tent city with supplies of food and water severely limited. Many residents were forced to sleep in the open air.

“We don’t want to go home now with so many aftershocks through the day, and even just now it is too risky to stay indoors,” said Sakila Gurng, a resident of the densely populated New Baneshwor neighborhood who was camping at a schoolground. “I hope it doesn’t rain.”

The city was in a state of “near total darkness” before 9:30 p.m., according to Kunda Dixit, editor of the Nepali Times.

The earthquake struck just before noon local time and was centered 48 miles northwest of Kathmandu, home to 1.4 million people.

It was most severely felt in the capital and the densely populated Kathmandu Valley, but it also shook several cities across northern India, and was felt as far away as Lahore, Pakistan; Lhasa,Tibet; and Dhaka, Bangladesh.

Officials said the quake occurred at a depth of only 7 miles, which is considered shallow in geological terms. The shallower the quake, the more destructive power it carries. Witnesses said the trembling and swaying of the earth went on for several minutes.

A magnitude 6.6 aftershock hit about an hour later, and at least 20 other aftershocks followed the huge quake, Nepal’s most powerful in eight decades.

“This quake was so big, “said Prajana W. Pradham, who is helping coordinate the CARE relief agency’s emergency response. “We’ve been feeling tremors for four hours. I just felt another big jolt.”

Kathmandu’s airport was closed, television and Internet services were disrupted, and phone and electricity lines were down.

A number of historic structures were severely damaged or destroyed, including Patan Durbar Square. The area is one of three Durbar Squares in the Kathmandu Valley, all of which are UNESCO World Heritage Sites. Dharahara Tower, a 200-foot-tall structure built in 1832, collapsed, trapping some people underneath.

Video from the scene showed people digging through the rubble of the collapsed tower, looking for survivors.

As the quake intensified, residents ran out of homes and buildings in panic. Clouds of dust began to swirl around them. Large cracks opened up on streets and walls.

Three other aircraft, including two C-17s, were sent from India, Indian Foreign Secretary Sujatha Singh said on Indian television. One was carrying a mobile hospital.

“There has been heavy damage in and around Kathmandu,” Singh said, adding that Nepal’s government asked for tents, blankets and teams to help search for survivors. On Sunday, he said, 10 helicopters would be sent for local rescues, medical airlift and food distribution.

Nepal, a country of 30 million people, is bordered by India to the southwest and China to the northeast.

Many structures in Nepal are made of unreinforced brick or rubble and field stone, and scores of people were injured in the quake by falling bricks.

The quake — with the same magnitude as the one that hit San Francisco in 1906 — was about 16 times more powerful than the 7.0 quake that devastated Haiti in 2010. A magnitude 7 quake is capable of widespread and heavy damage. A magnitude 8 quake can cause tremendous damage.

In January 1934, a magnitude 8.2 quake struck Nepal, killing an estimated 10,000 people in Nepal and more than 7,000 in India. Much of Kathmandu was destroyed in that quake.

Though the extent of the damage and the scale Saturday’s quake are yet to be ascertained, it will likely put a huge strain on the resources of this poor country best known for Everest, the highest mountain in the world. The economy of Nepal, a nation of 27.8 million people, depends heavily on tourism, principally trekking and Himalayan mountain climbing.

Javier Camacho Gimenez, a mountaineer and photographer who was at a base camp of Everest to attempt the ascent to the summit of Lhotse, said that avalanches had buried some camps, including ones with Chinese and Japanese climbers.

He estimated that eight people had died and 40 were injured. “The situation in the Everest base camp is now chaos,” he told the Spanish news agency Efe. “Helicopters can not access the area due to bad weather,” he said.

Among the dead on Everest was Dan Fredinburg of California, , a Google X project manager, the mountaineering company Jagged Globe wrote in a message from the camp where two other members of the team were being treated for injuries suffered in the avalanche. Fredinburg's sister Megan confirmed in a post on his Instagram account that he was dead.

Alex Gavan, a mountaineer, posted on Twitter that the quake triggered an avalanche from Pumori, about five miles west of Everest. “Huge disaster,” he wrote. “Helped searched and rescued victims through huge debris area. Many dead. Much more badly injured. More to die if not heli asap.”

Ariani Soejeti, communications officer for the International Organization for Migration, said by phone that recently built structures in Kathmandu seemed to have survived intact but that severe aftershocks continued after nightfall and that people had been told to stay outdoors.

Lakshmi Prasad Dhaka of Nepal’s Home Ministry said roads were blocked, hampering rescues. Rain was forecast for Sunday, which could add to the misery of those whose homes were rendered uninhabitable.

At least two buildings in the capital, Dhaka, leaned precariously after the quake.