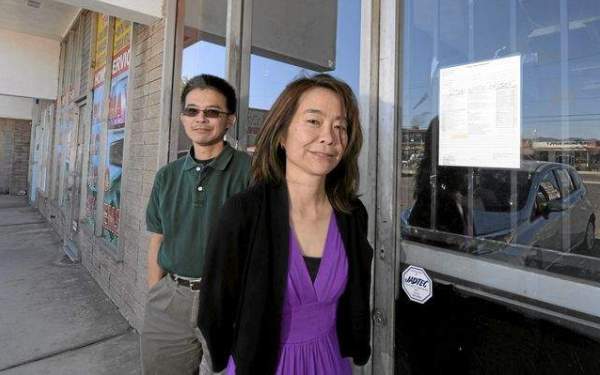 Siblings Wendell and Rhoda Gee are battling the city of Fontana over a $241,939 fine they received for allowing a medical marijuana dispensary to operate at their commercial rental property.
(Credit: Sarah Alvarado — San Bernardino County Sun)

FONTANA - This working-class city has grown by leaps and bounds since its incorporation in 1952. And since 2000, it has been one of the fastest growing cities in Southern California.

But would Fontana be so bold as to declare itself a state of the United States?

In what could be an unprecedented legal challenge, a Riverside attorney is alleging just that in an attempt to get a nearly $242,000 fine against his clients tossed by arguing the city of Fontana illegally declared itself a state of the United States when imposing the judgment.

Like many cities across California, Fontana’s city code allows for the use of what are called sister-state judgments to collect fines and penalties payable to the city.

But attorney Scott Talkov, on behalf of his clients Wendell and Rhoda Gee, maintains that sister-state judgments are tailored for the purpose of allowing one state where a judgment is owed to collect on that judgment from another state where a debtor has moved. He says local government cannot use sister-state judgments as a legal mechanism to facilitate the collection of fines.

“The city of Fontana has unlawfully declared itself to be a sister state, defined as a “state of the United States,” in violation of the United States and California constitutions,” Talkov said in a writ of mandate filed in San Bernardino Superior Court on March 27. Talkov is requesting that the judge set aside the $241,939.32 judgment against his clients and order Fontana to strike its ordinance defining all fines owed to the city as sister-state judgments.

“This has never been tried before anywhere in the nation. The Constitution says only Congress can declare a state,” said Talkov, an attorney for the Riverside law firm Reid & Hellyer.

Attorneys representing Fontana in the lawsuit maintain that the practice is legal under state law, and that numerous other cities across the state have similar ordinances in place. Furthermore, Talkov’s motion wasn’t filed until more than a year after the judgment was served on the Gees, long after the 30-day window allowed under state law to appeal. Talkov’s motion, therefore, is time-barred by the statute of limitations, attorneys for the city maintain.

The case has been a nightmare according to siblings Wendell and Rhoda Gee, Bay Area residents who inherited their father’s building on Foothill Boulevard, east of Juniper Avenue, in 2010 after he died. Their father, Alexander Gee, purchased the building in the mid-1960s and operated a laundromat there for nearly half a century.

Problems began for the Gees when they leased out the building to Michael Flores after their father died. Flores opened the Collecticare medical marijuana dispensary.

“I asked him (Flores) if that was legal, and he said, ‘Yes,’ and that it was perfectly legal in California,” Wendell Gee said during a recent interview in Fontana. He said he researched California’s Compassionate Use Act of 1996, which made doctor-approved medical marijuana legal in the state, and believed everything was OK.

What Gee was not aware of was that state law also allows cities and counties in California to impose their own ordinances banning dispensaries, and that Fontana, like most other cities across the Inland Empire, outlawed medical marijuana dispensaries.

The Gees said Flores assured them he would take care of the problem and hired Redlands attorney James DeAguilera to battle the city over the legality of the dispensary. Meanwhile, the fines continued to pile up against the Gees at $1,000 per day — for each of them — inflating to more than $200,000.

So the Gees retained Talkov to assist them in their plight. And now, Talkov is using the “Fontana State” defense to see if he can get the judgment tossed and help the Gees save their property.

A motion hearing is scheduled for May 4 in San Bernardino Superior Court.

For the Gees, the thought of losing the building where their father eked out a living for so many years saddens them deeply. And knowing they could lose it for such reasons troubles them even more.

“This property has been in the family for more than 50 years,” Rhoda Gee said. “It also affects our current tenants who have been leasing space for the last 20 years. It’s sad.”

Local News
New California law will redefine who is an employee. What does it mean for workers and businesses?
740 views