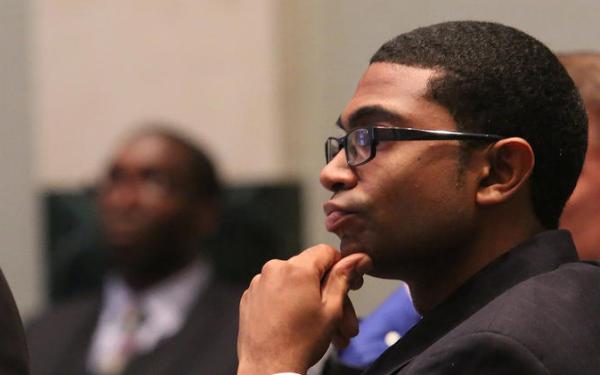 ORLANDO, Fla. — The convictions Friday of three former Florida A&M University band members in the 2011 hazing death of a fellow percussionist represent the end of the state’s prosecution against all the students involved in the case.

But for Pam and Robert Champion Sr. — the victim’s parents — the fight is not over. They want to see a harsher punishment than what has previously been given for the death of their son, Robert Champion.

“A strong message needs to be sent (about hazing),” Pam Champion said shortly after the judge read the guilty verdicts on manslaughter and felony hazing charges. “And there are consequences. We have to get the message out. For some reason these people are not getting it.”

A jury took nearly three hours to convict the band members after four days of testimony. Aaron Golson, 22, Benjamin McNamee, 24, and Darryl Cearnel, 28, will be sentenced June 26. They each face up to 20 years in prison.

Their convictions stem from the killing of 26-year-old Champion, who lost too much blood after he endured being beaten, punched and kicked during a marching-band ritual known as “crossing Bus C” on Nov. 19, 2011. The famous Marching 100 had just performed at the Florida Classic. Band members voluntarily participated in the tradition, which takes place on a parked bus, to gain prestige in the percussion section.

State Attorney Jeff Ashton said he will seek the minimum prison time of nine years, as he did for the two other defendants sentenced to manslaughter in the case. Fifteen ex-band members were charged after Champion’s death, but most were sentenced to probation and community service.

The most severe sentence came in January after the conviction of accused ringleader Dante Martin. The 28-year-old former bus president received six years in prison for manslaughter, felony hazing and two counts of misdemeanor hazing related to two other band members.

After the trial Friday, Ashton said he hopes the case alerts people that hazing is not acceptable, even for a greater purpose such as belonging to a group.

“Young people have to learn that you can’t hide behind what the group does because you are responsible for what your friends do when you get into something like this,” he said.

Family members of the three defendants would not comment after the verdict. Many cried as the three men gave up their suit jackets for shackles and were ushered out of the courtroom by Orange County deputy sheriffs.

Throughout the trial, the defendants and their families prayed together. It sparked a disruption Friday after jurors caught sight of it. Ashton had been concerned the moment may have influenced jurors in their decision and considered asking for a mistrial but later agreed with other attorneys to move forward with the case.

Defense attorney Craig Brown, Golson’s lawyer, said any lesson from the trial is not clear-cut. The case may momentarily discourage people from hazing, but it won’t have a lasting effect, he said.

“All in all, these are some really good kids who had bright futures, well-educated, and at this point, right now, they have been derailed,” Brown said. “They didn’t go to Florida A&M for any other reason but to be a part of that band, and now to find themselves in this position because of the band — it’s disheartening.”