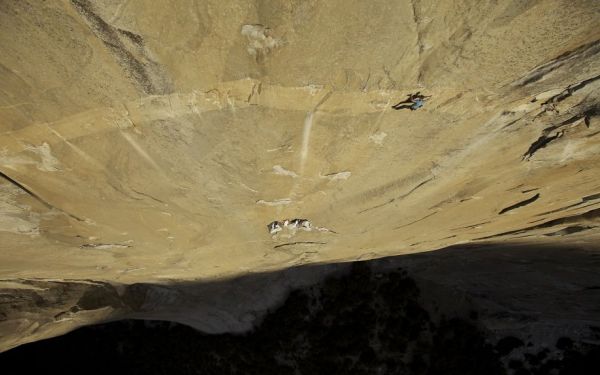 The world seemed to be holding its collective breath for 19 days in January when Kevin Jorgeson and Tommy Caldwell struggled against gravity, inching their way up the 3,000-foot wall of El Capitan.

On Jan. 14, the two men accomplished something no one else had ever done: They were the first to free climb the towering monolith in Yosemite Valley. More than likely, someone else will go them one further in the not-too-distant future, because that’s been the pattern of climbing in the 15-mile-long valley for more than 50 years.

Literal one-upmanship is one reason men and women are so obsessively drawn to climbing. Another has to do with breaking rules — and not just the law of gravity, as you’ll understand after watching the terrific documentary “Valley Uprising: Yosemite’s Rock Climbing Revolution,” airing Saturday, April 25, on the Discovery Channel. The valley has been the cradle of the most challenging variety of rock climbing for more than 50 years now, and you’ll quickly understand why.

“Valley Uprising,” directed by Peter Mortimer, Nick Rosen and Josh Lowell, traces the history of climbing in the valley from the 1950s through the present day and finds an almost religious fanaticism among climbers about what they do.

The early generation of climbers in the generally unadventurous 1950s took their cue from a line in Jack Kerouac’s “The Dharma Bums”: “I see a vision of a rucksack revolution.” Men like Royal Robbins, Yvon Chouinard, Tom Frost, Steve Roper and Chuck Pratt made their way to the valley and began to contemplate scaling the towering rocks all around them.

Before what became known as the “Golden Age,” climbing was considering just practicing for mountaineering, and the emphasis was on safety. With Robbins and the others, climbing came into its own. Participants readily admit there is no logic behind what they do. They are simply driven to climb up difficult surfaces.

Robbins and the other early pioneers were mentored by an eccentric Swiss denizen of Yosemite named John Salathe, a former San Mateo blacksmith, founder of Peninsula Iron Works, who made his first climb in his mid-40s and never looked back.

To make his own mark, Robbins set his sights on conquering the northwest face of Half Dome, a 2,000-foot vertical wall which had never been climbed before. His success earned him special status among the other climbers. Not long after, though, he was challenged by a hard-drinking, womanizing iconoclast whose mother had named him after a lesser U.S. president.

Warren Harding viewed Robbins and other climbers as “Valley Christians,” too tied to what they saw as the proper rules for climbing. Harding was out to break those rules and to eclipse Robbins. To do so, he went for an even greater challenge than Half Dome, the even taller El Capitan. Going up and down the face of the mountain using a series of ropes to haul supplies and himself, Harding took two years but eventually made it to the top in 1958.

In 1970, he and Dean Caldwell spent 27 days, including several clinging to the rock while being pummeled by a violent storm and defying attempts to rescue them, to conquer the Dawn Wall of El Capitan

Robbins was angry, not so much because Harding made it to the top, but because of his methodology of hammering expansion bolts into the side of the mountain. It wasn’t right, as far as Robbins was concerned.

Robbins set out to chisel off every single bolt that Harding had sunk into the rock, but the higher he got, the more he was overtaken with awe at exactly what Harding had accomplished on El Capitan. At a certain point, he stopped removing the bolts.

Harding was a kind of scout for the next generation of climbers, even more zealous rebels like Jim Bridwell, the first climber to conquer the 3,000-foot “nose” of El Capitan in a single day, and free-solo climber John Bachar, who looked like a blond Southern California surfer.

These were the Stonemasters, or, as some more accurately labeled them, “the stoned masters.” They broke rules, but in doing so, followed an unwritten script for the rite of passage from one generation of climbers to the next. You break rules and in time, establish your own, until others come along to break the rules you’vee established.

The Stonemasters were young, rebellious hot shots who, in time, would pass the torch to another generation of climbers, such as Alex Honnold of Sacramento, a jug-eared practitioner of free solo climbing — scaling impossible heights using only his hands and feet. Watching footage of him virtually upside down on the underside of an outcropping of stone will send your heart into your mouth.

It’s clear from “Valley Uprising” that climbers never settle. They are always looking for the next challenge, the next thrill. Even now, Robbins says, “Whenever I get on the rock, I feel it’s something that makes me whole.”

Soaring walls of rock aren’t the only challenge climbers face, however. Today, the floor of Yosemite Valley is like a “small city” and millions of tourists flock to the park every year. The park is so popular that camping is limited to seven days, far less than what a climber needs even to assess the best route to the top of a mountain, much less make the climb. Some climbers hide out in the park, sleeping in remote areas and dodging park rangers in order to get enough time to make a climb.

Others have added base jumping to their list of desired activities. The thrill of hurling themselves off a mountain top is augmented by the need to avoid rangers looking to arrest them as soon as their parachutes open and they drift to the ground.

By the end of “Valley Uprising,” you’ll understand that the film is only partially about rock climbing. It’s impossible not to see deeper parallels to more metaphysical concerns. Don’t we all spend our lives wanting to climb higher? To break whatever holds us back in life?

“Getting to the top is nothing,” Royal Robbins says in the film. “How you do it is everything.”

In a larger sense, putting their own lives on the line is how the the climbers profiled in “Valley Uprising” reaffirm them. With eyes ever angled upward, they seek higher and higher climbs, as if some day they might actually break those “surly bonds of earth” altogether and reach the stars themselves.