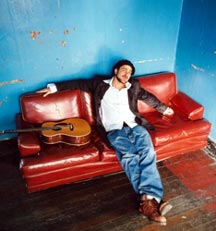 If your life resembled a Citizen Cope song, your experience might be something like this: Burning penitentiaries would light up the night sky, the obstacle of hurricane waters would be a minor inconvenience to a determined man, true love would happen when the moonlight meets the sunlight, insomniacs would lay sleepless on diamonds, and you’d understand that there’s nothing wrong with a man falling haplessly in love with a woman painted on a wall mural.

If your life resembled a Citizen Cope song, you would welcome the surreal nature of the unexpected, as the rugged poetics of urban life lulled you into a dream state where the realities of everyday life become cinematic in their charm.

Citizen Cope (A.K.A. Clarence Greenwood) bonds realism to romanticism, each song leaving behind a few tattered photographs of its villains, heroes, fighters and lovers — intimating tales of people’s struggles to connect with others in the face of personal adversity and societal miscarriage.

"Storytelling has always been based in oral tradition in any culture’s history," Cope says about his visceral, narrative songwriting style. "Before there was writing, any history was told. So I think, innately as writers, we’ve been taught [how to make] a song come to life so it lives, breathes, has emotions, has flaws and has character."

Cope’s absorbing storytelling ability — carefully aligned with music rooted in folk, hip-hop, reggae, blues and rock — brings his artistry to the forefront of the singer-songwriter genre.

The Clarence Greenwood Recordings, released Sept.14 on RCA, marks Cope’s second major label release and proves an enigmatic and captivating followup to 2002’s Citizen Cope, his critically acclaimed Dreamworks Records debut that sank into obscurity due to mishandled promotion and creative differences with the now defunct label. The self-produced Greenwood Recordings impresses the listener as the album Cope has been waiting to make all along, boasting a tighter collection of songs, such as his first single "Bullet and a Target," that transition flawlessly from one to the next. Cope also hosts an all-star lineup of guest musicians on his album, including Carlos Santana ("Son’s Gonna Rise"), Paul Buggy Edwards ("Bullet and a Target"), James Poyser ("Nite Becomes Day") and Me’shell Ndegeocello ("Sideways").

"With Citizen Cope, there’s a vision, and hopefully [that vision] evolves. I want every record to evolve so the tone of every instrument that’s played is very important," says Cope. "The tone of every instrument on that recording should make that song better or that song’s experience better … every note. If it doesn’t, it shouldn’t be there. That’s my approach to production.

"Every snare hit and every bass line should enhance that song. The production of the music should enhance it and the performance of everybody performing it should enhance it," Cope says about his choice to have such renowned talent join him on the new record.

Whether in the studio, on stage or composing with pen and paper in hand, Cope insists that the key to his creative process resides in trusting his instincts. "It all comes from the heart," he says. "I personally just follow my instincts and let the art happen. I pick up the guitar and it happens. It doesn’t happen the same way every time, but it’s definitely an instinctual thing."

Cope cites film as another key influence to his creative process — an admission that comes naturally given the cinematic presence of his songs — to the point where he could see himself creatively scoring film soundtracks in the future.

"I think the tempo of film itself and music mixed with film is a very powerful thing. It’s really incredible because film itself has a tempo and music is very visual, at its best. So I think that when they’re put together there’s a great marriage. Sometimes in the studio, I’ll just play movies with the volume turned down just to keep a visual tempo. I did that a lot on this record."

Cope is a self-taught, multi-instrumentalist who began playing guitar in his teens while growing up in Washington, D.C. who got his first taste of the music industry as a member of the experimental hip-hop group Basehead. When Basehead disbanded, Cope headed to New York and made a conscious decision to pick up the guitar again, trading sampled beats for melody and laying the foundation for what would become his next project, Citizen Cope.

"On my first record, I threw in a lot of overdubbed sounds that just weren’t needed," Cope has said in the past. "This time, anything that didn’t enhance the material or make the songs better, I just stripped away."

It is this stripped down version of his music that lends Greenwood Recordings its classic appeal and makes it accessible to listeners on an organic, tangible level. Cope’s music stays centered around a melodic core, his rhythms are focused, his suede vocals are delivered effortlessly and evenly balanced, and his lyrics impart intimacy by connecting the private lives of his subjects to every man’s struggle with the general public.

"The feeling and the soul that you put into the record is really what connects," Cope says. "The emotion is a universal thing. You don’t have to speak [any particular] language to understand it. You just connect to the spirit and emotion."

Cope’s live performance has earned him the respect of fans and critics alike. Cope is as capable of captivating large audiences with a full band as he is of performing solo and acoustically, as seen during recent sold-out showcases at New York’s Sin-e and a recent gig opening for B.B. King at his Times Square club. Cope pushes his own performer’s boundaries while simultaneously paying homage to those who have set musical precedent before him.

"Ray Charles used to say that he wasn’t a genius. The people he listened to were geniuses," Cope recounts. "We’re all blessed [with] all this great music out there for us to hear. You just have to take each opportunity to make records as a serious one because there’s been so much given to us as listeners."