Corinthian to close its last schools; 10,000 students in state displaced 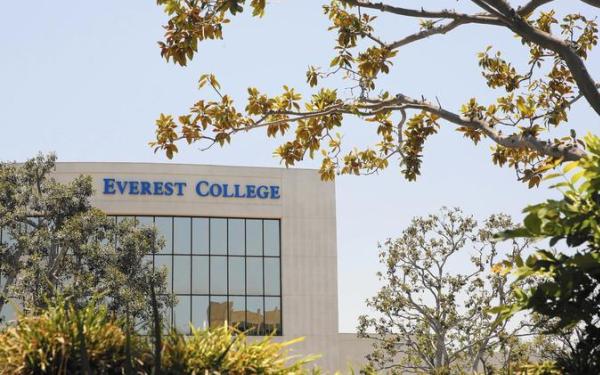 After years of government investigations, Corinthian Colleges Inc. will shut down more than two dozen of its remaining schools, displacing more than 10,000 California students. The move ends the turmoil at what was once one of the nation's largest for-profit college chains but presents fresh challenges to students, who now must seek transfers or federal loan forgiveness.

The loans were both the lifeblood and the downfall of the troubled Orange County company. Easy access to student debt fueled high tuition and big profits — until the federal government cut off the tap last year, as investigators accused Corinthian of falsifying job placement rates.

Many students, attracted by the promise of higher-paying work, now find themselves with heavy debts for degrees of dubious worth. Many others won't graduate at all.

"A lot of us are devastated," said Dylan Low, 22, who was pursuing a criminal justice associate's degree at Everest College-Ontario and had only three more classes to finish before graduation in July.

The closure, announced Sunday, had been expected for months, but Corinthian gave students and employees almost no notice.

For many observers of the for-profit college industry, Corinthian's meteoric rise and fall offers a cautionary tale for other institutions that rely almost entirely on funding from federal student loans and grants.

Like many other large for-profit schools, Corinthian nearly doubled revenue to $1.75 billion from 2007 to 2011, as the Great Recession prompted millions of unemployed workers to seek opportunity in higher education and career training. But the company lacked the cash flow to survive after the U.S. Education Department barred its access to student loans last summer.

"This has really exposed the shortcomings of federal and state oversight, and the accreditation system," said Pauline Abernathy, vice president of the Institute for College Access & Success, an Oakland advocacy group that focuses on student debt issues. "The fact that a school could be allowed to get so big and so reliant on taxpayer funding — and to harm so many students without action being taken sooner — really exposes the need to reform the system at all levels."

This month, the Education Department levied a $30-million fine against Corinthian's Heald College system, which operates primarily in California. The agency alleged that the company boosted official placement rates by paying temporary employment agencies to hire students for brief stints after graduation. Corinthian denied the allegations.

Higher education experts acknowledged that Corinthian's demise was imminent, but they questioned why federal education officials continued to allow many schools to enroll students until just before the final collapse.

"Once it became clear they had no future, they should have been making efforts to transfer students elsewhere," said Ben Miller, a former policy advisor in the Education Department who is a senior policy analyst at the New America Foundation in Washington.

Ted Mitchell, the U.S. undersecretary of education, said the department would work with Congress to "improve accountability and transparency in the career college industry."

By last fall, amid federal pressure, Corinthian had sold the majority of its schools to a nonprofit student loan servicer. But ongoing litigation with California Atty. Gen. Kamala D. Harris and an investigation by the Education Department prevented the company from selling more than two dozen campuses in California and other Western states. The schools operated under the brands Everest, WyoTech and Heald.

Corinthian said in a news release Sunday that it failed to sell the remaining campuses because federal and state authorities were "seeking to impose financial penalties and conditions" that would affect potential buyers. California regulators this month also ordered Corinthian to stop enrolling new students because the company couldn't produce required financial documents.

The company said it had "ceased substantially all operations" in the release, but the company has not formally filed for bankruptcy.

Going forward, students face a choice: Try to transfer credits elsewhere — a difficult process — or get a discharge of federal student loans and start over at a new institution.

When a school shuts down suddenly, students are eligible for a full discharge of federal loan debt. Students at Corinthian schools that were sold last fall, however, do not have the same options, though a group of former Corinthian students and nine state attorneys general are pressuring the Education Department to offer loan forgiveness to all those affected.

For students such as Low, just a few months from graduation, the closure presented a frustrating predicament: Either start over from scratch, or go through the time-consuming process of transferring credits that may never be recognized by other institutions. The disgrace of the Corinthian chain won't help his cause.

One of Low's classmates at Everest College-Ontario, Rena Rivas, 25, is also just a few months away from graduating. She gave birth to a daughter in March and had to stop classes a few months earlier on orders from her doctor. Despite those complications, she said she was firmly committed to finishing her criminal justice degree this year.

Even if she gets her loans forgiven, she said she wouldn't be satisfied.

"The last two and a half years I spent going to that school — the trouble, the time, the money I spent on gas — I feel like it was a waste of time," said Nemer, who lives in Victorville, about 50 miles from the Ontario campus. "I'm pretty much at a complete loss right now. I'm not even sure what the next step is."

On Tuesday and Wednesday, staff from California's Department of Consumer Affairs will be holding sessions at some of the California campuses affected by the closure. Staff will be available at 13 Everest and WyoTech schools across the state, but not at Heald College campuses, which have different accreditation and aren't supervised by the agency.

Russ Heimerich, an agency spokesman, said staff would help students get proper paperwork to apply for loan discharges or to seek transfers.

Everest and WyoTech campuses have a nontraditional accreditation that applies mostly to career colleges, meaning it can be very difficult to transfer credits to community colleges or four-year institutions.

"Transferring credits from one private postsecondary school to another is almost always problematic," Heimerich said, "and it almost always doesn't happen."